Homeland militarization — tanks in Ferguson, Blackhawks in Minneapolis — must be stopped 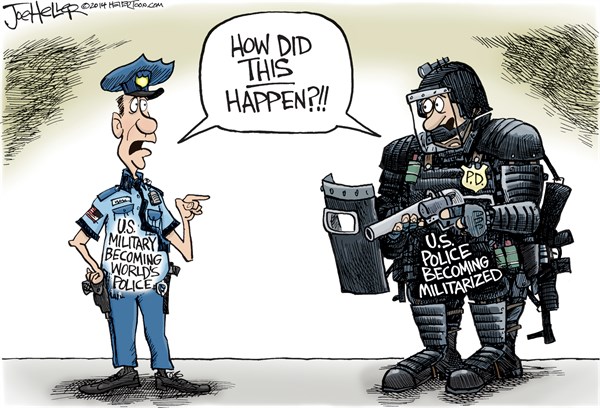 This week the helicopters that were sent off to Iraq and Afghanistan to protect us here at home were flying around downtown Minneapolis and St. Paul. The Blackhawk helicopters were here on “urban training exercises” rattling the windows of residents’ condos, homes and apartments right here at home in Minnesota.

Why were they here? When did a city of civilians become the training grounds for the U.S. Army, and why has there not been a louder outcry against the intrusive presence of the military into what we have now come to call “the Homeland”? Perhaps because we believe it makes us “safer,” but citizen preoccupation with security is the spawning ground for national security states.

A day after the Pew Research Center issued its report on the strikingly divergent attitudes of whites and blacks about law enforcement following the death of Michael Brown, U.S. Attorney General Eric Holder sent to Missouri to meet with leaders there. According to the Pew Center, “blacks and whites have sharply different reactions to the police shooting of an unarmed teen in Ferguson, Mo., and the protests and violence that followed. Blacks are about twice as likely as whites to say that the shooting of Michael Brown ‘raises important issues about race that need to be discussed.’ Wide racial differences also are evident in opinions about whether local police went too far in the aftermath of Brown’s death, and in confidence in the investigations into the shooting.”

I live in a predominantly white middle-class neighborhood in Chaska. The police aren’t around much except to pick up a dead opossum that tried to cross the street. We don’t think much about the police where I live. But I also have a memory from the summer of 1968 that puts me with those who believe that race and institutional violence — particularly police violence — are tied together in places like Ferguson or North Minneapolis, and other places that feel to their residents like a military occupation.

The time I’m remembering came on the heels of The National Commission on Civil Disorders (known as “the Kerner Commission,” so named after its respected chair, Otto Kerner) warned that “our nation is moving toward two societies, one black, one white — separate and unequal.” President Lyndon B. Johnson rejected the commission’s multiple recommendations for addressing the problem of growing economic disparity between whites and blacks.

Back then I was a 26-year-old assistant pastor of a downtown church in Decatur, Illinois. What I experienced on the church parking lot etched the report’s findings in my heart and mind. I’ve never seen our society the same since.

The summer program for youth from the public housing projects let out at 10 p.m. Ninety-eight percent of the kids in Teen Town were black. The program had been a success by every measure, drawing 100-500 youth from the tenements to the downtown church on any given night. Until a neighbor from the adjacent apartment building called the police at closing time.

By the time I made it up the stairs from the recreation room, the squad  cars were plunging into the crowd, billy clubs swinging in every direction, mace spraying indiscriminately in the kids’ faces, police officers choking the program’s assistant director with a billy club, handcuffing him and shoving him into the back of the paddy wagon.

That night 40 store windows were broken out in downtown Decatur near the church. I drove home, slapped on my clerical collar and waded into the melee. It was clear to me that this was what the Kerner Commission described. This was the result of a police riot. It should never have happened.

Neither should what happened in Ferguson, Missouri. You don’t need to shoot a kid six times — and the sight of law-enforcement officers riding armored tanks with guns pointed at civilians reignites the enduring embers of the tragedy of race in America.

Blurring the line between military and civilian life

The Kerner Commission Report was issued as a result of urban civil disturbances in America’s major cities. It spoke of race and the police and National Guard violence — a systemic problem that threatened American society itself. Back then armored tanks with gun turrets patrolled the streets of Detroit. This month the very same thing happened. The only difference is that this time the officers were dressed in camouflage pants that looked like U.S. Marine or Army attire. That was in Ferguson, Missouri.

The Night Hawks in their Blackhawk helicopters flew around the Twin Cities from Monday through Thursday night. It is no assurance that, according to the unit’s Fort Campbell, Kentucky commander, the same “urban training exercises” have taken place in San Diego, Phoenix, and other major cities. It doesn’t make it right, and it provides little comfort to those who value keeping a hard line between military and civilian life.

Our military adventures abroad can have disastrous domestic consequences. What we sent off to Iraq and Afghanistan are now training in our own backyards. The message the commander wants us to hear is that they are here to protect us, our best friends, as it were, among our neighbors. “There are terrorists in every city,” he said, wanting to assure us. But the presence of the “urban training” exercise feels more like an occupation by a national security state.

Ferguson, Missouri, and the Twin Cities of Minnesota are not in Iraq or Afghanistan, but they feel more and more like them every day.

The questions are moral and spiritual, just as they were when the Kerner Commission identified the drift toward two societies, one white, one black. Just as they were in Abu Graib. Just as they are now when the U.S. Army special forces unit is using our own cities as military training grounds … for what purpose?

How do we stop this before we’re all dead opossums? I wish I knew. So, I’m sure, do Eric Holder and the president.

The Rev. Gordon C. Stewart blogs at Views from the Edge. He is pastor of theShepherd of the Hill Presbyterian Church in Chaska, where he serves as moderator of First Tuesday Dialogues: examining critical public issues locally and globally.