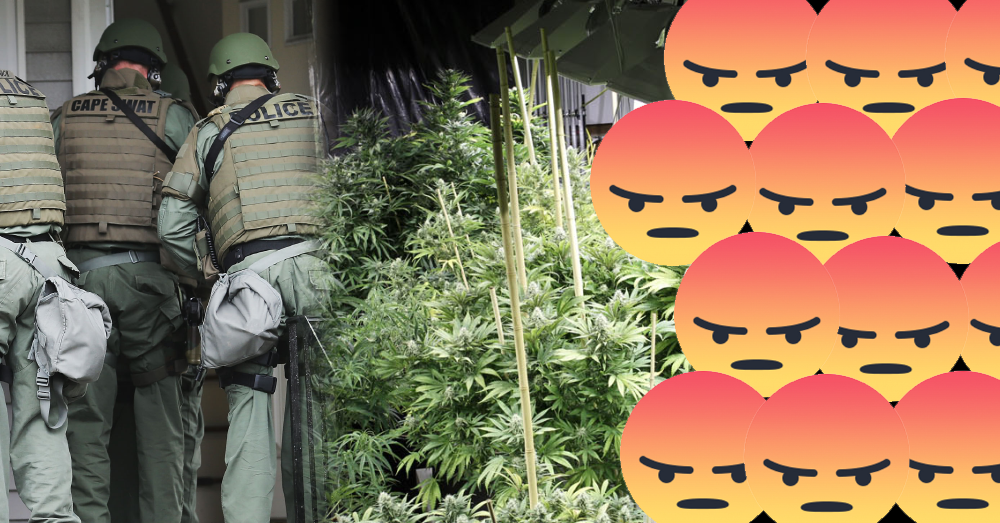 (TAM) The sheriff’s department in Forsyth County, Georgia, recently drew widespread attention on social media – and not in a good way.

Though Georgia technically allows medical marijuana, the law is restrictive and bans the cultivation, processing, and sale of cannabis. According to the police:

“One arrest was made for Manufacturing, Trafficking, and Possession with Intent to Distribute.

“Arrests like this reflect the commitment the Forsyth County Sheriff’s Office has to our community and keeping everyone safe.”

The Forsyth County Sheriff’s office has over 50,000 likes on its Facebook page. A cursory scroll of their posts shows their average level of engagement — a few hundred likes here, several dozen shares there. But their post on confiscating marijuana drew a firestorm of critical attention.

The post has received over 1,400 shares, over 2,900 comments, and has been inundated with Americans who are tired of the war on a plant that is increasingly proving to have medical benefits.

Here’s a sampling of some of the most thoughtful, biting reactions. Some were quick and to the point: (Link)

Though it’s entertaining to observe the backlash government agencies receive for refusing to acknowledge science, the will of voters, and the basic concept of self-ownership, the internet’s trolling of the Forsyth County Sheriff’s Facebook page demonstrates something more serious — and empowering: as states continue to legalize cannabis, those who insist on working to keep it illegal are being shamed for their regressive beliefs.

While this may seem unnecessarily negative, the pressure the internet allows individuals to place on government officials is powerful and productive. Last summer, the DEA backed off its plans to schedule kratom, a powdered herb that helps deal with pain, anxiety, and other ailments, after internet users and others mobilized to oppose the scheduling. When the Federal Reserve made a Facebook page last summer, it was inundated with commentary on the central bank’s exploitative policies, which effectively nullified any public relations benefits the Fed hoped to achieve. Most powerfully, in early 2012, internet users came together to reject two internet censorship bills, SOPA and PIPA, and with the support of other internet giants, Congress ultimately backed off their proposed legislation.

As American “democracy” continues to deprive many Americans of their rights, social media is a powerful way for millions of people to express their beliefs and engage directly with individuals and institutions they feel are acting unjustly.

To their credit, the sheriff’s page warns that they “reserve the right to remove any comments that are vulgar, disrespectful, or disparaging,” but they have apparently opted not to censor most of the comments.

Still, they would do well to take notes from police officers around the country, a majority of whom now favor medical marijuana and view cannabis as an increasingly low priority.

This article (Sheriff’s Department Posts Pics of Weed Bust on FB – Gets Instantly Destroyed) is free and open source. You have permission to republish this article under a Creative Commons license with attribution to Carey Wedler and theAntiMedia.org. Anti-Media Radio airs weeknights at 11 pm Eastern/8 pm Pacific. If you spot a typo, please email the error and name of the article to edits@theantimedia.org.