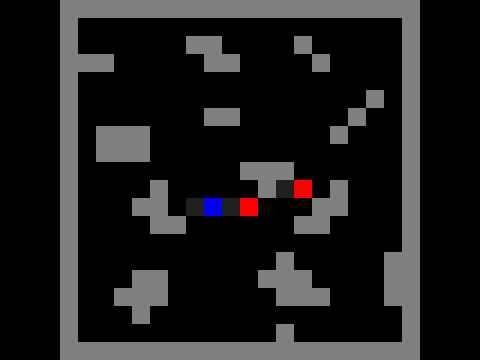 Will artificial intelligence get more aggressive and selfish the more intelligent it becomes? A new report out of Google’s DeepMind AI division suggests this is possible based on the outcome of millions of video game sessions it monitored. The results of the two games indicate that as artificial intelligence becomes more complex, it is more likely to take extreme measures to ensure victory, including sabotage and greed.

The first game, Gathering, is a simple one that involves gathering digital fruit. Two DeepMind AI agents were pitted against each other after being trained in the ways of deep reinforcement learning. After 40 million turns, the researchers began to notice something curious. Everything was ok as long as there were enough apples, but when scarcity set in, the agents used their laser beams to knock each other out and seize all the apples.

The aggression, they determined, was the result of higher levels of complexity in the AI agents themselves. When they tested the game on less intelligent AI agents, they found that the laser beams were left unused and equal amounts of apples were gathered. The simpler AIs seemed to naturally gravitate toward peaceful coexistence.

Researchers believe the more advanced AI agents learn from their environment and figure out how to use available resources to manipulate their situation — and they do it aggressively if they need to.

“This model … shows that some aspects of human-like behaviour emerge as a product of the environment and learning,” a DeepMind team member, Joel Z Leibo, told Wired.

“Less aggressive policies emerge from learning in relatively abundant environments with less possibility for costly action. The greed motivation reflects the temptation to take out a rival and collect all the apples oneself.”

The second game, Wolfpack, tested the AI agents’ ability to work together to catch prey. The agents played the game as wolves who were being tested to see if they would join forces as strategic predators; if they jointly protected the prey from scavengers they would enjoy a greater reward. Researchers once again concluded that the agents were learning from their environment and figuring out how they could collaboratively win. For example, one agent would corner the prey and then wait for the other to join.

Researchers believe both games show an ability in artificial intelligence entities to learn quickly from their environments in achieving objectives. The first game, however, presented an added bit of abstract speculation.

If more complex iterations of artificial intelligence necessarily develop aggressive, greedy ‘impulses,’ does this present a problem for a species already mired in its own avarice? While the abstract presented by DeepMind does not venture to speculate on the future of advanced artificial minds, there is at least anecdotal evidence here to suggest AI will not necessarily be a totally logical egalitarian network. With complex environments and willful agents, perhaps aggression and self-preservation arise naturally…even in machines.

This article first appeared on TheAntiMedia.org and was authored by Jake Anderson.