Gov SWAT Teams Target “Rugged Individuals” Who Grow Their Own Food, Produce Their Own Electricity 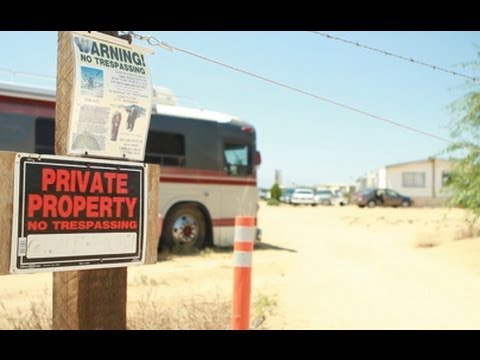 (Pictured: Armored Nuisance Abatement Team – similar vehicles are in use across the United States)

The dream of many Americans is to get out of the hustle and bustle of the daily city grind. And what better dream to have then to move your family outside of city limits to the countryside so that you can grow your own food, produce your own electricity with solar power, and live outside the purview of an ever expanding government apparatus?

That was the goal for hundreds of residents living on the outskirts of Los Angeles. Many own their land outright and have been living on it for decades without so much as a peep from their local government. They’ve built their homes using whatever means they had available to them. They planted their own fruits and vegetables. They even set up their own personal power production stations using solar panels and miniature wind farms.

And they’ve lived peacefully without violating the rights of those around them and leaving a very small “carbon footprint” to boot. For all intents and purposes, they achieved a life of independence and freedom.

But the tentacles of tyranny are everywhere and no one is protected from their grasp.

Recently, agents of the Los Angeles county government started paying visits to these rugged individualists. They claimed they were “here to help,” as one resident puts it. But, as is generally the case when the government comes knocking, they were there for exactly the opposite.

What was once a dream come true for many quickly turned into the new American nightmare.

Code enforcement agents for the county showed up in droves. But they didn’t come alone. Along with them came heavily armed “Nuisance Abatement Teams” who raided the homes and land of these peaceful residents as they would those of a terrorist.

Gallow says he cooperated with the county – clearing brush, then moving his shed, then getting rid of his motor home.

Finally, the county made a demand that shocked him.

Gallow says county officials told him that neighbors, whom they would not identify, had complained about unsightly structures on his property.

He could keep his land, they told him, but would not be allowed to live on it.

“I said, for what? My closest neighbor is half a mile away. We’re not living in Beverly Hills here, this is my home. All of sudden you got police at my front door – bullet proof vests, guns, and then they surrounded the place. Everything I worked for was just melting away from me.”

Mr. Gallow is not alone. County enforcement officials with militarized Nuisance Abatement Teams in tow have made similar threats to other residents, ordering them to destroy everything on their properties and to get off their own land.

Watch this shocking, yet unsurprising account of the plight of these Americans who want nothing more than to be left alone: