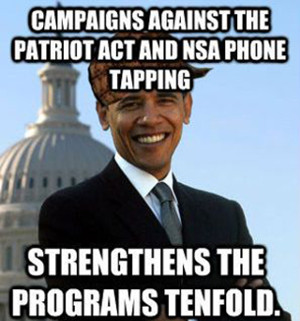 Earlier this week, the federal government’s National Science Foundation (NSF), an entity created to encourage the study of science—encouragement that it achieves by awarding grants to scholars and universities—announced that it had awarded a grant to study what people say about themselves and others in social media. The NSF dubbed the project Truthy, a reference to comedian Stephen Colbert’s invention and hilarious use of the word “truthiness.”

The reference to Colbert is cute, and he is a very funny guy, but when the feds get into the business of monitoring speech, it is surely no joke; it is a nightmare. It is part of the Obama administration’s persistent efforts to monitor communication and scrutinize the expressions of opinions it hates and fears.

We already know the National Security Agency has the digital versions of all telephone conversations and emails sent to, from or within the U.S. since 2005. Edward Snowden’s revelations of all this are credible and substantiated, and the government’s denials are weak and unavailing—so weak and unavailing that many NSA agents disbelieve them.

But the government’s unbridled passion to monitor us has become insatiable. Just two months ago, the Federal Communications Commission (FCC), which licenses broadcasters, threatened to place federal agents in cable television newsrooms so they can see how stories are generated and produced. The FCC doesn’t even regulate cable, yet it threatened to enhance its own authority by monitoring cable companies from the inside.

What’s going on here, and has been going on since President Obama took office in January 2009, is a government with little or no fidelity to basic constitutional norms. There is no defense under the Constitution to any aspect of the government’s—federal, state, regional, local or hybrid; or any entity owned or controlled by any government; or any entity that exercises the government’s coercive powers or spends or receives its money—monitoring the expressive behavior of anyone in the U.S., not in a newsroom, on social media or anywhere else.

The NSF’s stated purpose of the Truthy squad is to look for errors in speech, particularly errors that fuel hatred or political extremes. This monitoring—this so-called search for error—is totalitarian and directly contradicts well-grounded Supreme Court jurisprudence, for several reasons.

The articulable suspicion threshold is vital to assure that people in America have the presumption of liberty and are free to choose their behavior unimpeded or threatened by the government. The feds cannot cast a net into the marketplace of ideas and challenge what it brings in. Were they able to do so, the constitutional protections for free expression and the primacy of liberty would be meaningless.

Second, the courts have repeatedly held that the First Amendment needs breathing room, and they also have held that government monitoring of speech curtails that breathing room. Stated differently, a person under observation changes behavior on account of the observation. Thus, by the very act of monitoring our words, the feds will have the effect of curtailing them.

The virtual or physical presence of the monitors would give people pause, cause them to reconsider offering opinions, induce them to refrain from expressing their true thoughts and even drive their speech underground. This is called “chilling,” and it has been condemned by numerous Supreme Court decisions.

The principal purpose of the First Amendment is to keep the government out of the marketplace of ideas, and any governmental behavior that influences the exercise of the freedom of speech—no matter how gently, indirectly, innocently or secretly—violates that principle and provides the basis to sue the government to have its Stasi-like monitoring of speech enjoined. Another prime purpose of the First Amendment is to encourage open, wide, unfettered and robust debate about the policies and the personnel of the government. Who can engage in that with Big Brother watching and keeping score?

All presidents push the envelope when it comes to exercising their constitutional powers. But we never before have seen in modern times a president like the present one. From his halcyon days as a senator fighting for civil liberties, he has descended into a totalitarian darkness. How can he ask soldiers to defend a Constitution with their lives that he disregards with his deeds?

The government is worried about speech. Big deal. Speech is none of the government’s business. History teaches that the remedy for tasteless speech is not government repression—it is more speech. In a free society, when the marketplace of ideas is open and unfettered, the truth is obvious. But in a repressive society, the truth becomes a casualty. Which society did the Framers give us?