WAITRESS WAS BEING ATTACKED BY DRUNKEN CROWD, COP SHOWS UP AND UNLOADS FOUR BULLETS AT HER 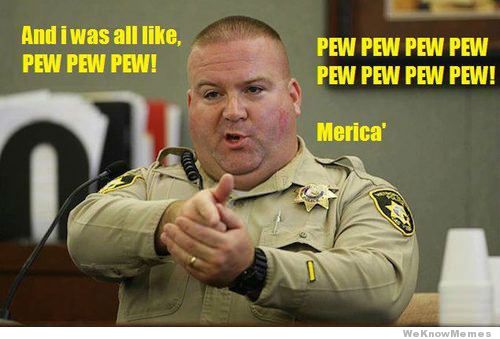 AUSTIN, Texas (CN) – An Austin policeman shot four times “point blank” into the windshield of a waitress fleeing a late-night attack from drunks on a “crowded and boisterous” street, then arrested her and impounded her car for 10 months, the woman claims in court.

Gwendolyn Daniels sued Officer Robert Krummel and the City of Austin in Federal Court on Monday for excessive force, unlawful arrest and conversion.

Daniels claims she had just finished her late night shift as a server at the Coyote Ugly bar when she tried to leave the barricaded East 6th Street area in her vehicle.

Daniels says she accelerated to escape the mob, causing her tires to squeal and attract the attention of Officer Krummel and other Austin police officers, who ran in the direction of the commotion.

“Krummel then inexplicably and without warning pulled his weapon and opened fire on Ms. Daniels’ vehicle in complete and utter disregard for Ms. Daniels’ safety and the safety of the several hundred other citizens walking along the street there,” according to the lawsuit.

“Krummel fired his service weapon four times at point-blank range into the windshield of Ms. Daniels’ vehicle as she passed by him, very narrowly missing her, and he likely would have killed her had the bullets not lodged in the dashboard but instead had struck her at such close range.”

Daniels says she stopped her car at the next intersection, where she was “gruffly handled and ignominiously taken to the ground by the APD officers there.”

She says it should have been a “routine traffic stop.”

Officers then interrogated her for hours at police headquarters while she was handcuffed to a metal bench in a cold room.

Daniels says she was in a state of shock, was not offered any water, or even allowed to call her mother, who is a judge.

Police released her without charges after several witnesses came forward and said she had done nothing illegal and was merely trying to escape the mob attacking her vehicle, Daniels claims.

Nonetheless, the police impounded her Pontiac Grand Am for 10 months.

When she got it back, Daniels said, it was a total loss and inoperable because the dashboard had been destroyed by the police investigation.

Daniels says the city tried to duck liability for the incident.

“In several television interviews APD Chief [Art] Acevedo called Ms. Daniels ‘driving drunk’ without basis and without any evidence of alcohol in her system,” the complaint states.

Daniels says the abuse caused “severe psychological injury and could have easily caused her death. The graveness of the situation also caused her several episodes of witnessed aggression and the change in her personality was the cause for her loss of employment since that incident. Ms. Daniels now suffers because of the PTSD caused by Krummel shooting his service weapon at her. That PTSD continues to this day.”

She seeks costs of medical and counseling, damages for excessive force, unlawful arrest, false imprisonment, conversion, and physical and emotional injuries, and punitive damages from Krummel for gross disregard of her liberty, safety and well-being.

She is represented by Edmund Davis.