[The Growing Police State] New York is a city on the brink, ready to explode. Citizens are fed up with being continually abused by law enforcement and citizens nationwide are angry at the lack of accountability officers often face for their actions. 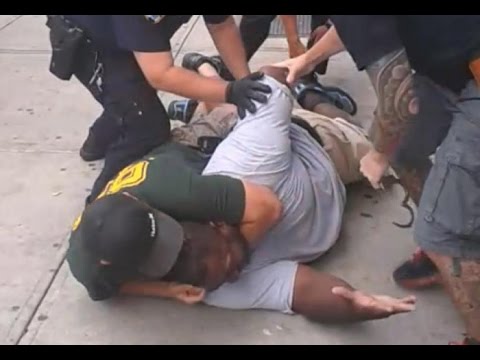 New York is a city on the brink, ready to explode. Citizens are fed up with being continually abused by law enforcement and citizens nationwide are angry at the lack of accountability officers often face for their actions.

New York City, N.Y. – In a perhaps telling and ominous sign, Richmond County District Attorney Daniel M. Donovan has called on the public to be patient and peaceful after the grand jury announces whether it will indict NYPD officer Daniel Pantaleo in the choking death of Eric Garner, which was ruled a homicide by the medical examiner.

A grand jury is currently deliberating on whether to charge officers in the July 17, killing of Garner, a 43-year-old father of six.

The evidence in this case is indisputable, as there is cellphone footage of the police killing Garner. Garner was non-aggressive in the video while he pleading with the cops to leave him alone as they began to initiate violence upon him.

Sadly, as evidenced by the police killing of Kelly Thomas on video, no outcome is guaranteed when it comes to holding officers accountable for killing a citizen, as seen in the not guilty verdict for the officers that killed Thomas while he begged for his life, on video.

Police allege that Garner was selling “untaxed” single cigarettes which was the reason for them making contact with him. Witnesses claim the Garner had actually broken up a fight between two other men when police approached him. It is rumored that officers had previously harassed Garner and this was simply another incident of police harassment. Garners family claims he had no cigarettes on him at the time of his death.

In the cellphone video of the incident that went viral this summer, Garner can be heard saying, “I didn’t sell nothing, I’m minding my business officer.”

Pantaleo can then be seen putting Garner in a chokehold, as Garner attempts to put his hands in the air begging to be left alone. Other officers then grab Garner’s arms as he is slammed to the pavement.

Officers can then be seen piling on top of Garner as he struggles to breath, gasping for air. Garner can be heard on the video begging the cops continuously to stop because he couldn’t breath shouting “I can’t breath, I can’t breath” before ultimately having the life choked out of him as he went into cardiac arrest.

Garners’s mother, Gwen Carr, in an interview with the Associated Press stated, “You’d have to be blind not to see what happened. I can’t see why it should take so long to reach a decision,” referring to the grand jury proceedings.

Many suspect that lengthy proceedings and the words of District Attorney Donovan, in concert with reports that the NYPD had boots on the ground in Ferguson collecting intelligence on what they labeled “profession agitators,” are signs that officer Pantaleo won’t be indicted and the NYPD is preparing for protests and unrest once the decision is announced.

NYPD Commissioner Bill Bratton has stated that extra officers will be on hand on Staten Island when the grand jury decision is announced. Bratton went on to say that the NYPD will handle any demonstrations in the same manner that the Occupy Wall St. demonstrations were handled.

“We, as you might expect, are planning accordingly,” Bratton said. Police have also said they will not tolerate the blocking of traffic as seen in protests in New York after the Ferguson grand jury chose not to indict Darren Wilson.

While claiming to respect the right to protest and free speech, Mayor Bill de Blasio stated, “If we think public safety is compromised, the police will act very assertively to address that problem.”

Judging by how the OWS protestors were brutally treated by law enforcement, and the statements made by city and police officials, it looks as if the oppressive mechanisms of the New York City machine have already been set in motion to crush any expression of free speech and dissent.

Pantaleo needs to be held accountable for his actions, the bone chilling video of him choking the life out of Garner as he begs for his life cannot be swept under the rug. While the Mike Brown/Darren Wilson grand jury had a measure of plausible deniability, due to the conflicting nature of testimony of witnesses and there being no video evidence, this grand jury has irrefutable video evidence of exactly what transpired and it seems an indictment should be easy to come by.

New York is a city on the brink, ready to explode. Citizens are fed up with being continually abused by law enforcement and citizens nationwide are angry at the lack of accountability officers often face for their actions.

Hopefully justice is served in this case, as I fear that no matter what preparations the city makes, if this killer cop is not indicted there may be no stemming the outrage that will be displayed and it very well could make the events in  Ferguson look tame by comparison.

Tragically, if history is any indicator, we should not be surprised if the grand jury doesn’t return an indictment.

The citizens of this country demand justice for the brutal killing of Eric Garner. Killer cops must be held accountable for their actions.

Jay Syrmopoulos is an investigative journalist, freethinker, researcher, and ardent opponent of authoritarianism. He is currently a graduate student at University of Denver pursuing a masters in Global Affairs. Jay’s work has previously been published on BenSwann.com and WeAreChange.org. You can follow him on Twitter @sirmetropolis, on Facebook at Sir Metropolis and now on tsu.