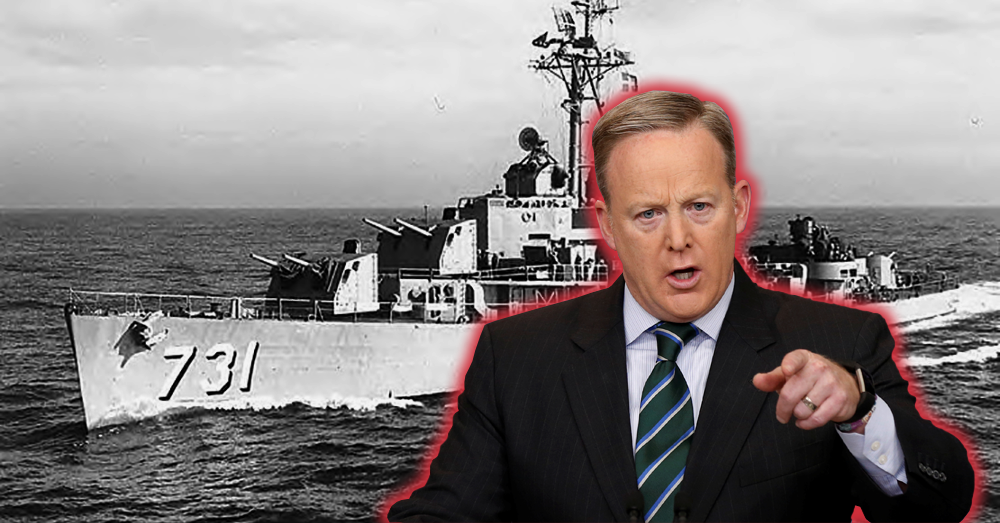 When Press Secretary Sean Spicer cited an Iranian attack on a U.S. ship that never happened in order to prove Iran’s aggression against the United States, it made some wonder if this was the 2017 edition of the Gulf of Tonkin incident.

It was Aug. 2, 1964, when the U.S.S. Maddox was struck by North Vietnamese patrol boats. Just two days later, on Aug. 4, a second attack was alleged to have occurred involving two U.S. Navy destroyers—the Maddox and Turner Joy.

However, it never happened, according to former United States Secretary of Defense Robert McNamara. He testified in 1995 that it was a false flag. Even the New York Times claimed that the attack didn’t happen.

When Spicer said on Thursday that Iran attacked a U.S. ship, he cited what would be considered an act of war.

However, Spicer was actually referring to a Houthi rebel attack against a Saudi ship off the coast of Yemen that the pentagon believed was meant for a U.S. warship. There is a big difference between what it was “meant for” and what “actually happened.”

The Intercept confirmed directly with Pentagon spokesperson Christopher Sherwood that the attack in question actually took place on a Saudi warship.

The U.S. then responded by sending the U.S.S. Cole to an area off the coast of Yemen where U.S. warships were previously attacked in October.

“I think General Flynn was really clear yesterday that Iran has violated the joint resolution, that Iran’s additional hostile actions that it took against our Navy vessel are ones that we are very clear are not going to sit by and take,” Spicer said.

Spicer used the fake claim to bolster support for why the United States’ hostile actions against Iran.

President Trump tweeted, “Iran is playing with fire–they don’t appreciate how ‘kind’ President Obama was to them. Not me!”

Iran has been formally PUT ON NOTICE for firing a ballistic missile.Should have been thankful for the terrible deal the U.S. made with them!

Several experts, as well as Iran’s Foreign Ministry, say the missile test does not violate the terms of a 2015 UN Security Council resolution, and Iran has said it will defend itself against aggression.

Just as with the alleged attack on the Gulf of Tonkin, the press was used to spread the propaganda that Iran had attacked the U.S navy ship.

President Lyndon B. Johnson used the Gulf of Tonkin attacks to get Congress to approve his “Gulf of Tonkin Resolution,” which ultimately authorized military action in Vietnam, and led to the beginning of the Vietnam War. For more information on the Gulf of Tonkin being used as a “false flag,” and all that led up to it, you can read the declassified NSA documents.

In 2017, the Trump administration appears to be using the same strategy in terms of citing foreign aggression to justify a response. However, it is worth noting that Spicer may have gotten mixed up because the target according, to Trump’s administration was believed to be a U.S. navy vessel, according to Fox News.

This is the huge banner on @FoxNews right now. I have some important context to follow, from a US official. #Yemen https://t.co/QcfRzD71QL pic.twitter.com/coBrDwAujO

All in all, it’s the principle of manipulating the American public into another false war.

The same argument could also be made for the claim that Iraq had weapons of mass destruction when George W. Bush was in office, which turned out to be false.

One key problem is that it is not just the press reports—there has also been an abundance of lies and a fake memos based on spliced academic papers, such as Downing St., the UK equivalent to the White House’s report on WMDs in Iraq during the leadership of Bush and British Prime Minister Tony Blair.

It has since been revealed—thanks to Hillary Clinton’s emails–that Bush and Blair secretly planned the Iraq War one year before it began.

As former Minnesota Governor and Navy Seal Jessie Ventura has said, “all wars are started with a false flag.”

The problem isn’t just that Spicer cited an attack against the U.S. that never happened, it is also that the White House never issued a retraction.

What do you think of this news? Let us know in the comments!