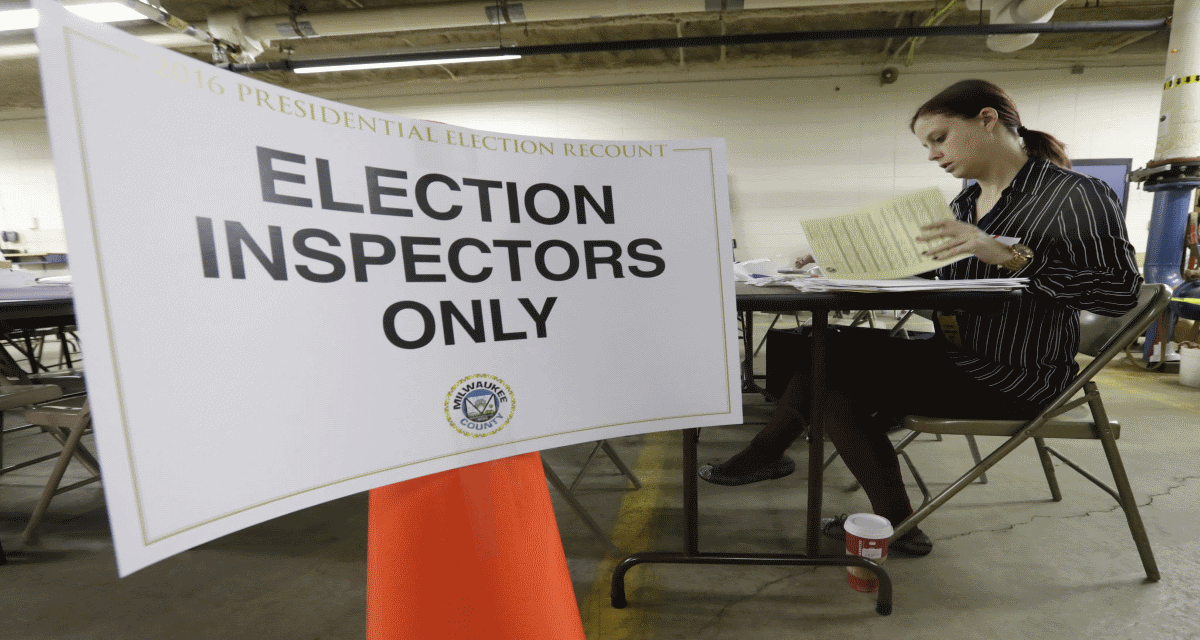 Half of Detroit votes may be ineligible for recount

Up to one-third of precincts in Wayne County could be disqualified from an unprecedented statewide recount of presidential election results because of problems with ballots.

Michigan’s largest county voted overwhelmingly for Democratic candidate Hillary Clinton, but officials couldn’t reconcile vote totals for 610 of 1,680 precincts during a countywide canvass of vote results late last month. In historically democrat counties the number of ballots in precinct poll books did not match those of voting machine printout reports in 59 percent of precincts, 392 of 662.

So Why Is Trump Fighting So Hard to Stop the Recount in Michigan?

It might be because according to state law, precincts whose poll books don’t match with ballots can’t be recounted. If that happens, original election results stand.

The Trump campaign filed a legal petition Thursday to stop Michigan’s presidential recount, saying Jill Stein has no chance of winning and no grievance, and there’s no way a hand count can be done before the Electoral College meets December 19.

“Despite being a blip on the electoral radar,  Stein has now commandeered Michigan’s electoral process,” said Trump’s petition to Michigan’s Board of State Canvasser. “Indeed, on the basis of nothing more than speculation, Stein asks that Michigan residents endure an expensive, time-consuming recount, and the scrutiny and hardship that comes with it.”

The Trump campaign called the recount an “electoral farce,” ignoring that it has been filed in a state where its candidate leads Hillary Clinton by almost 11,000 out of 4.8 million votes cast, the smallest margin of the final three states that gave Trump an Electoral College majority after election night.

“She does not allege, let alone explain, how a fourth-place finisher could be ‘aggrieved’ by the election canvass,” Trump’s petition said, saying candidates must be harmed to seek a recount under Michigan law. “And even if that could be overlooked, Stein’s request would have to be denied because no recount can be reliably competed in the time required by state and federal law” (to meet the Electoral College’s deadline).

Trump’s objection comes just one day after state officials said they would do a full, statewide hand recount of all votes cast in Michigan.

“It’s not good,” conceded Daniel Baxter, elections director for the city of Detroit.

He blamed the discrepancies on the city’s decade-old voting machines, saying 87 optical scanners broke on Election Day. Many jammed when voters fed ballots into scanners, which can result in erroneous vote counts if ballots are inserted multiple times. Poll workers are supposed to adjust counters to reflect a single vote but in many cases failed to do so, causing the discrepancies, Baxter said.

Even so, Baxter said it’s unlikely all 392 of the city’s precincts with mismatched numbers will be disqualified from a recount. The city is in contact with elections officials at the state of Michigan and Baxter predicted the numbers will match when the ballot boxes are re-opened for the recount, which starts Tuesday in Wayne County at Cobo Center.

“It’s a challenge, but we’re confident the ballots will match,” Baxter said. “I don’t think it’s going to be 100 percent, but it never is with a recount.”

County reports obtained by The Detroit News, though, indicate canvassers were provided no explanation for why the numbers didn’t add up in those precincts. They certified the results of the election anyway.

The recount will begin throughout the rest of Michigan’s 83 counties in phases this week.

Republican President-elect Donald Trump won Michigan by a razor-thin margin, 10,704 votes. Presumably, Clinton’s best opportunity to eliminate that margin rested in finding uncounted ballots in Wayne County, which she carried by a 2-1 ratio.

Disqualifying huge numbers of precincts would make it “almost impossible” for the former New York senator to make up the votes, said Ernest Johnson, a Democratic political activist who worked to get out the vote for Clinton.

“It’s a real long-shot now because, if I were looking for 10,000 votes, the first place I’d look is Wayne County,” Johnson said. “That’s a huge problem. … But if anything good comes of this it brings up this problem (with voting machines) that needs to be corrected.”

None had nearly as many problems as Wayne. But at least 13 of 222 precincts in Genesee County are not balanced. More than half of those were in heavily Democratic Flint, according to county canvassing reports. The election was still certified by its board of canvassers.

“The trouble is there’s too much leniency with the board of canvassers,” said John Gleason, Genesee County’s clerk. “They’re not as stringent as need to be because they think it won’t affect the outcome of the election.”

Gleason, who estimated the recount will cost the cash-strapped county $100,000, said he expects the numbers to reconcile when workers begin the county recount on Wednesday.

“It’s impossible to tell at this point how many will and how many won’t be re-countable,” added Joseph Rozell, elections director for Oakland County.

State law spells out a prescribed criteria for determining whether a precinct can be recounted. Workers first check to make sure the number of ballots on the seal of the container matches the ballots recorded by workers on Election Day.

“If the seal number matches, then we know it’s not been tampered with,” Rozell said.

If numbers don’t match, then workers can count all of the ballots in the precinct twice to see if there was an error made by workers on Election Night.

“If it does not match after the second count, then it’s not recountable,” Rozell said.

Entire precincts can be set aside in a recount if the ballots are stored in an unapproved container or if it isn’t properly sealed.

At Ingham County’s recount operation Monday at the county’s fairgrounds in Mason, ballots were stored in suitcase-like containers that were sealed with plastic zip-ties that had to be cut for workers to take out the ballots.

Byrum plans to have the ballot bags guarded each night during the recount by a sheriff’s deputy.

Elections officials instructed Ingham County recount workers who reconciled the ballot numbers on the second count to count them a third time to verify the numbers.

“The certified election results would stand if a precinct is determined to be non-recountable,” Byrum told reporters.

Half of #Detroit votes may be ineligible for statewide recount of presidential election results https://t.co/spaDXRyvHM via @detroitnews

On Monday, the Michigan Board of State Canvassers certified that Trump won by 10,704 votes, or a margin of just 0.22 percent of the total vote. But computer scientists and election experts have raised serious concerns about election results in papers filed for the Wisconsin recount. These include the vulnerability of voting machines that can be breached without detection and have a tendency to misread ballot markings. In Michigan, there were 75,335 under-count tallies—votes that machines did not record as selecting anyone for president—nearly double the amount recorded in 2012.

“America’s voting machines and optical scanners are prone to errors and susceptible to outside manipulation,” said J. Alex Halderman, one of the nation’s leading cyber security experts and a professor of computer science at the University of Michigan who filed court papers supporting a recount.

“Paper ballots, like those used in Michigan’s elections, are the best defense we have against cyber-attacks, but that defense is only effective if we actually look at the paper trail after the election,” he said. “That’s precisely why we need this recount—to examine the physical evidence, to look under the hood. A recount is the best way, and indeed the only way in 2016, to ensure public confidence that the results are accurate, authentic, and untainted by outside interference.”

This article (Italy’s Renzi announces resignation after referendum defeat.) is free and open source. You have permission to republish this article under a Creative Commons license with attribution to DannyQuest and WeAreChange.org.  If you find any grammatical mistakes or factual errors in this article please email them to Danny@wearechange.org