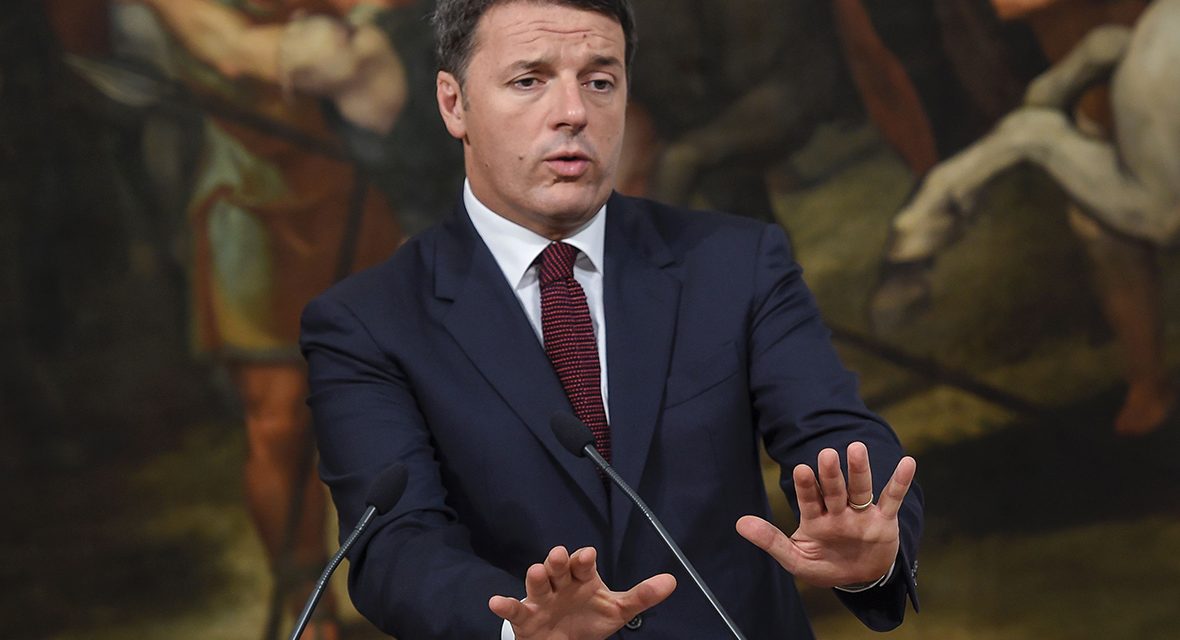 Following a referendum defeat, Italian PM Matteo Renzi has said he will step down without delay. Initial polls have suggested Italians overwhelmingly voted against the premier’s proposed constitutional reforms.

“My government ends today,” said Italian Prime Minister Matteo Renzi just after midnight on Monday, in a televised address from the Palazzo Chigi. “I take full responsibility for this defeat.”

Renzi said he could not refute the “extraordinarily clear” results of Sunday’s referendum on constitutional reforms, and called on his rivals to provide clear proposals for ending the continuous cycle of political deadlock in Rome. He offered his condolences to those in his “Yes” camp, congratulating them on a hard-fought campaign.

“Good luck to us all,” said the prime minister of two-and-a-half years, saying he would give his letter of resignation to President Sergio Mattarella later on Monday.

‘No’ constitutional change in Rome

Initial exit polls varied by source late on Sunday, but all had the constitutional reforms proposed by Renzi poised for crushing defeat.

State broadcaster RAI estimated that the “Yes” campaign to back the changes had garnered between 42-46 percent of the vote, while “No” had received somewhere between 54 and 58 percent. Turnout had been relatively high, according to the Interior Ministry, which said some 57 percent of eligible voters had turned out to the polls by 7 p.m. local time. Later estimates put turnout closer to 67 percent.

At stake were a number of governmental changes pushed by Renzi and his center-left Democratic Party (PD), which was hoping to reign in an unwieldy parliament by cutting the number of representatives in the upper-house Senate, getting rid of unproductive constitutional bodies and centralizing more power with the executive.

Renzi beset on all sides

But Renzi had faced an uphill battle from the start. By vowing to step down in the case of a “No” victory, he conflated constitutional change with support for himself and his party. In addition, his opposition came from all sides: former Prime Minister Silvio Berlusconi’s right-leaning Forza Italia Party, populists Lega Nord and the 5-Star Movement (M5S), and even some members of his own PD were against the move.

Ahead of the polls, many analysts voiced their concern over the possible instability a “No” vote could usher in, and what effect that might have on global markets.

A further concern among those familiar with Italian domestic politics was the possible rise of M5S, a nebulous left-leaning anti-establishment party that has little governing experience and no clear politic agenda. Despite ostensibly being leftist, M5S spokesman Beppe Grillo welcomed last month’s election of Donald Trump, saying that the people were beginning to show their discontent with the status quo.

‘Our revolution will not stop’

M5S was quick to hail the referendum results, with Grillo writing on his popular blog: “This vote has two significant consequences. First: Farewell Renzi. Second: Italians must be called to vote in a general election as soon as possible.”

Virginia Raggi, the mayor of Rome and Italy’s most visible M5S politician, wrote on Twitter that “the Italians have won. Now we rebuild our country. Our revolution will not stop, in Rome and Italy.”

France’s far-right National Front Leader Marine Le Pen also welcomed the news as part of her euroskeptic agenda, saying: “The Italians have rejected the EU and Renzi. This thirst for the liberty of nations and protection must be listened to!”

Le Pen has her eye on the French presidency as general elections approach in 2017, hoping to capitalize on the wave of populist and anti-establishment upsets that began with Brexit and Trump.

This article (Italy’s Renzi announces resignation after referendum defeat.) is free and open source. You have permission to republish this article under a Creative Commons license with attribution to DannyQuest and WeAreChange.org.  If you find any grammatical mistakes or factual errors in this article please email them to Danny@wearechange.org