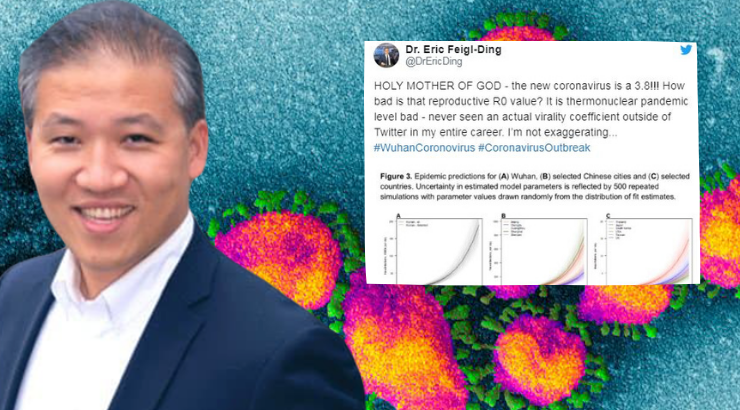 The virus, now known as 2019-nCoV, has killed 82 people, infected almost 3,000 more, and spread to multiple other countries—and Dr. Feigl-Ding has been tweeting about it non-stop since last week. It is the third time since 2003 that a coronavirus has made the jump from animals to humans.

Feigl-Ding, who holds a dual doctorate in epidemiology and nutrition, began by expressing that he is “deeply worried” about the outbreak and indicated that it may be “silently contagious“—a fact that has now been confirmed by China’s National Health Commission Minister Ma Xiaowei.

I’ll be honest – as an epidemiologist, I’m really deeply worried about this new coronavirus outbreak. 1) the virus has an upward infection trajectory curve much steeper than SARS. 2) it can be transmitted person to person before symptoms appear — I.e. it is silently contagious! pic.twitter.com/5Kjo6DkbQj

On Friday, Dr. Feigl-Ding prefaced his calculations that the reproductive value (R0) of the virus is 3.8 by saying “HOLY MOTHER OF GOD.” Others have estimated that the R0 is 3.3 and 2.6 while the World Health Organization (WHO) has put the R0 somewhere between 1.4 and 2.5

The R0 value, which represents the number of secondary cases which result from every new infection, is the key variable when determining how infectious a virus truly is.

Dr. Feigl-Ding went on to describe the outbreak as “thermonuclear pandemic level bad… I’m not exaggerating.”

HOLY MOTHER OF GOD – the new coronavirus is a 3.8!!! How bad is that reproductive R0 value? It is thermonuclear pandemic level bad – never seen an actual virality coefficient outside of Twitter in my entire career. I’m not exaggerating… #WuhanCoronovirus #CoronavirusOutbreak pic.twitter.com/6mmxIHL9Ue

A paper referenced by Dr. Feigl-Ding and uploaded to medRxiv estimates the R0 value “to be between 3.6 and 4.0, indicating that 72-75% of transmissions must be prevented by control measures for infections to stop increasing.” The non-peer reviewed article goes on to explain:

“Our model suggests that travel restrictions from and to Wuhan city are unlikely to be effective in halting transmission across China; with a 99 percent effective reduction in travel, the size of the epidemic outside of Wuhan may only be reduced by 24.9 percent.”

11/ REFERENCE for the R0 attack rate (reproductive coefficient) of 3.8 and the 99% containment models come from this paper: https://t.co/KrQfuAfS4l

Eric Toner, Senior Scholar with the Johns Hopkins Center for Health Security and Senior Scientist in the Johns Hopkins Bloomberg School of Public Health, Department of Environmental Health and Engineering, also expressed during an interview with CNBC that China’s efforts to contain the outbreak are “unlikely to be effective.” 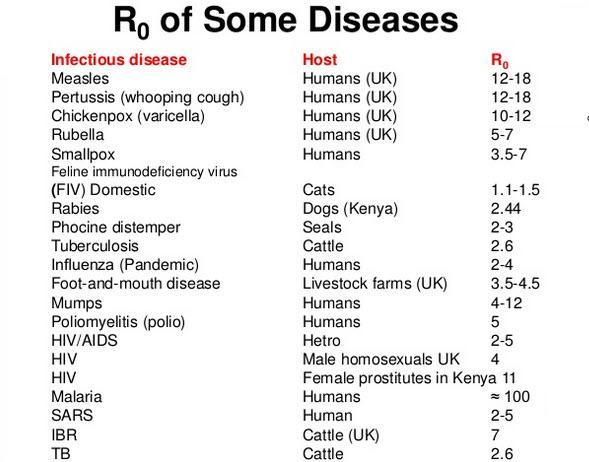 Researchers in the U.K. have estimated that only 5.1 percent of cases in Wuhan have been identified.

As rumors and misinformation about the virus, the outbreak, the true conditions in China, and even simulations that took place months prior, Dr. has come under harsh criticism for his tweets. However, the epidemiologist contends he is not “trying to incite fear.”

Some folks think I’m trying to incite fear. I’m not trying—I’m a scientist. This #coronavirus #WuhanCoronovirus is serious. Over 50 million people are quarantined + case counts will go up much more. Predict @WHO will declare emergency. Let’s hope for the best, prepared for worst. https://t.co/H3UcR9eAjs

It is important to remember that the above estimates are just that and are based on assumptions amidst a rapidly changing situation that could continue to change in various and even unknown ways without a moment’s notice. While it currently appears that 2019-nCoV is far more infectious than previously known coronaviruses and may be on par with the 1918 Spanish flu pandemic that killed 20 to 50 million people around the world, it may switch gears at any time. However, the R0 value for the Spanish flu was a mere 1.8, so even if the estimates putting 2019-nCoV’s R0 value closer to 2.8 are more accurate, it’s “still super bad.”

On Monday, Feigl-Ding touched on and attempted to clarify the conflicting R0 estimates:

5) CONFLICTING R0 NUMBERS: Lots of conflicting reports of Wuhan #coronarovirus R0 (reproductive number) — not all the R0 estimates are the same! The @MRC_Outbreak’s R0=2.6 is the most reliable since they used WHO data as @WHO research center. Most other used generic online data.

In Dr. Feigl-Ding’s latest tweets he calls on the WHO to “finally” declare an emergency.