Hillary Clinton: “If I’m President, We Will Attack Iran” 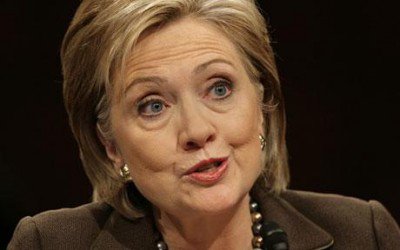 (globalresearch)On Friday, presidential aspirant Hillary Clinton addressed a hand-picked audience at a Dartmouth College campaign event. She lied calling Iran an “existential threat to Israel… I hope we are able to get a deal next week that puts a lid on (its) nuclear weapons program.”

Even if we do get such a deal, we will still have major problems from Iran. They are the world’s chief sponsor of terrorism.

They use proxies like Hezbollah to sow discord and create insurgencies to destabilize governments. They are taking more and more control of a number of nations in the region and they pose an existential threat to Israel.

We…have turn our attention to working with our partners to try to reign in and prevent this continuing Iranian aggressiveness.

Fact: US and Israeli intelligence both say Iran’s nuclear program has no military component. No evidence whatever suggests Tehran wants one. Plenty indicates otherwise.

As a 2008 presidential aspirant, she addressed AIPAC’s annual convention saying:

The United States stands with Israel now and forever. We have shared interests….shared ideals….common values. I have a bedrock commitment to Israel’s security.

(O)ur two nations are fighting a shared threat” against Islamic extremism. I strongly support Israel’s right to self-defense (and) believe America should aid in that defense.

I am committed to making sure that Israel maintains a military edge to meet increasing threats. I am deeply concerned about the growing threat in Gaza (and) Hamas’ campaign of terror.

No such campaign exists. The only threats Israel faces are ones it invents.

“I support calling the Iranian Revolutionary Guard what it is: a terrorist organization. It is imperative that we get both tough and smart about dealing with Iran before it is too late.”

She backs “massive retaliation” if Iran attacks Israel, saying at the time:

“I want the Iranians to know that if I’m president, we will attack Iran. In the next 10 years, during which they might foolishly consider launching an attack on Israel, we would be able to totally obliterate them.”

She endorses using cluster bombs, toxic agents and nuclear weapons in US war theaters. She calls them deterrents that “keep the peace.” She was one of only six Democrat senators opposed to blocking deployment of untested missile defense systems – first-strike weapons entirely for offense.

Stephen Lendman lives in Chicago. He can be reached at lendmanstephen@sbcglobal.net.

His new book as editor and contributor is titled “Flashpoint in Ukraine: US Drive for Hegemony Risks WW III.”

Visit his blog site at sjlendman.blogspot.com.