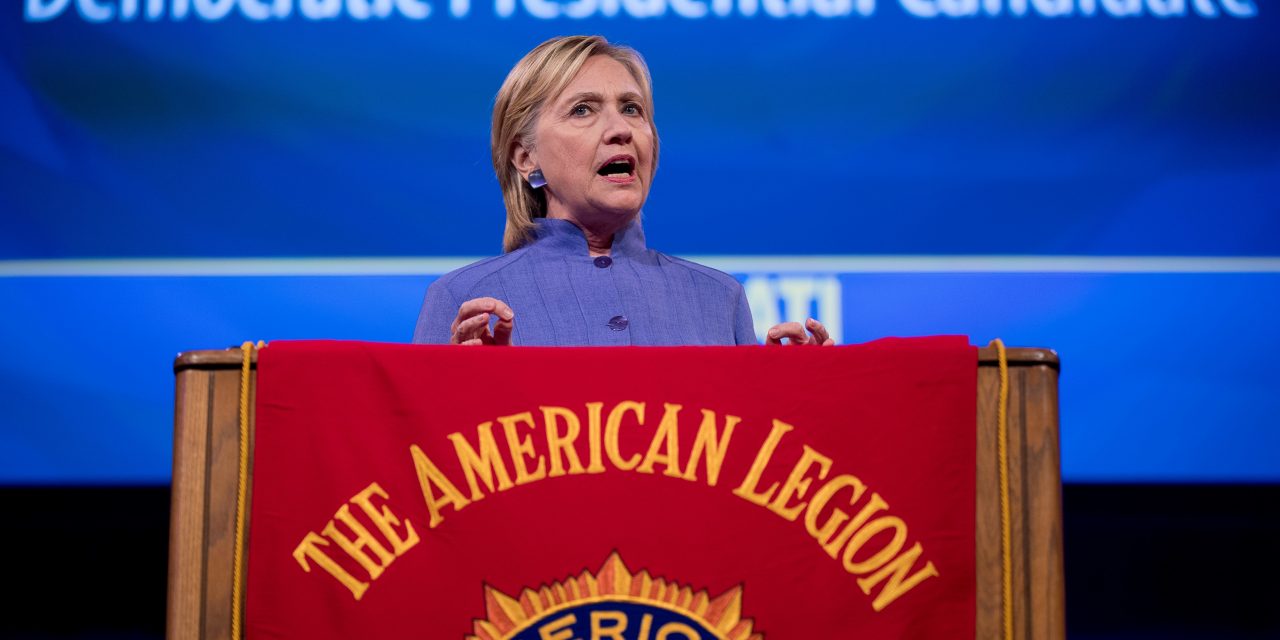 Speaking before a group of veterans on Wednesday, Democratic presidential candidate Hillary Clinton gave perhaps her most hawkish speech to date, with sharp words villainizing Russia and promises to respond to cyberattacks with military force. 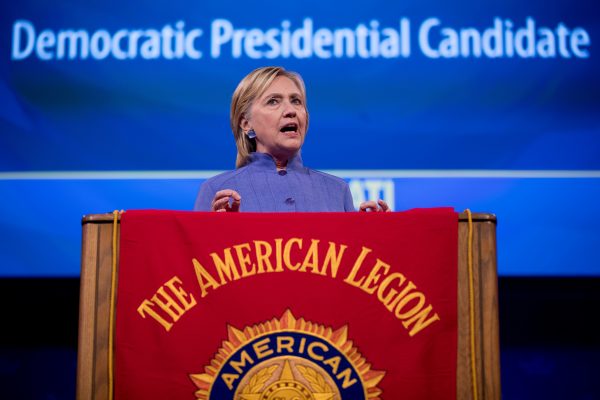 From the Duke Energy Convention Center in Cincinnati, where the 98th National American Legion convention is underway, Clinton focused on “American exceptionalism.”

Explaining her view of the role the U.S. plays in the world, Clinton stated that America is “the indispensable nation.” She explained that U.S. importance in the world is a serious responsibility, and that the actions Washington does and does not take have a great impact on the lives of people around the globe.

Clinton then explained that, in her view, the United States is essentially the world’s police force. Her speech gave the impression of heavily courting neo-conservatives with a penchant for war.

“Our power comes with a responsibility to lead, humbly, thoughtfully, and with a fierce commitment to our values — because when America fails to lead we leave a vacuum that either causes chaos or other countries or networks rushing to fill the void.”

She noted that part of the reason why America is so powerful is because of their network of allies, and warned that the same network would be at risk under a President Trump, again mentioning Russia and China as enemies.

“No other country in the world has alliances like ours — Russia and China have nothing close,” Clinton stated.

“If I’m your president, our friends will always know — America will have your backs and we expect you to have ours,” Clinton said, as many on social media spoke out about their fears that she sounded set on being a wartime president.

Clinton claimed that the nation needs to “solve global problems, as only we can,” again painting a stark contrast to her opponent’s repeated statements against globalism and focusing on unorthodox methods to solve problems at home.

Clinton’s track record of “solving global problems,” is a lengthy list of destabilized regions, including Honduras, Haiti, Syria, and Libya.

“We can’t cozy up to dictators, we have to stand up to them,” Clinton stated, reminding many of her push to take down Libyan leader Muammar Gaddafi. That gambit left Libya in absolute chaos, Daesh rising in power, and an estimated 400,000 people displaced as a direct result of the intervention.

Clinton then listed the nations she considers to be a threat, stating that the US needs a military “that is ready” for them, explaining that she believes that the United States must embrace new tactics, including treating “cyber attacks just like any other attacks,” a pointed statement as she continues, despite of evidence to the contrary, to paint Russia as a nation of hackers.

“We need to respond to evolving threats, from states like Russia, China, Iran and North Korea,” Clinton stated, also mentioning the terror group Daesh. “We need a military that is ready and agile so that it can meet the full range of threats — and operate on short notice across every domain — not just land, sea, air, and space, but also cyber space.”

She reasserted unsubstantiated claims that state-operated Russian intelligence services were behind the hack of the Democratic National Committee (DNC). The Kremlin has strongly denied any involvement in the breach.

Clinton, her campaign, and her party, have continuously claimed that Russia was behind the DNC hack, and have accused WikiLeaks founder Julian Assange of working with Putin to meddle in the US election, despite multiple officials and experts pointing out that there is no evidence that Russia was involved in the hack.

“The new joke in town is that Russia leaked the disastrous DNC e-mails, which should never have been written (stupid), because [Russian President Vladimir] Putin likes me,” Trump tweeted in July.

The Democratic candidate’s demonization of Russia has been strongly criticized by many journalists as a new wave of McCarthyism.

“It’s a very sort of disturbing strategy that not is just disturbing in and of itself, but that will have enduring consequences in the likely event that Hillary Clinton wins, because when you constantly inflame the public by telling them that Russia is this enemy, that they have domestic agents operating in the US, namely anyone who is a critic of the Clinton campaign,” journalist Glenn Greenwald said on Democracy Now, “That’s going to have lots of long-term implications in terms of how the US government treats Russia, how the American media and the American people are going to expect the US government to react to Russia and how much dissent and criticism is going to be allowed without people being accused of being agents of the Kremlin.”

Immediately after making her claims, Clinton threatened that she would offer a military response to cyber threats.

“Make sure we are well defended and able to take the fight to those who go after us. As president I will make it clear that we will treat cyber attacks just like any other attack,” Clinton said. “We will be ready with serious political, economic, and military responses.”

Clinton also asserted that she wants to increase control of the internet, because if the “US doesn’t, someone else will.”

“I want us to lead the world in setting the rules for cyberspace,” she said.

Donald Trump is expected to speak to the same crowd at the convention on September 1.