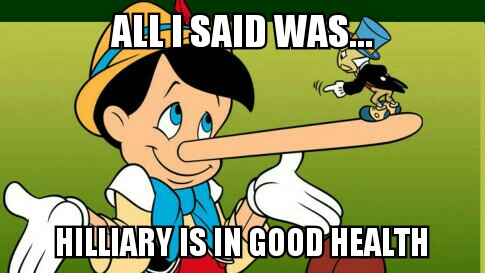 After Hillary Clinton’s collapse at a 9/11 memorial on Sunday, Wikileaks posted an email showing Hillary’s health issues were potentially life-threatening, and both older and deeper than the “pneumonia” her campaign claimed caused her sickness.

The email is from Hillary’s long time aide Huma Abedin, with an article on Hillary’s life threatening “Sinus Thrombosis.”

Huma sent Hillary an article describing Hillary’s condition as Cerebral Venous Sinus Thombosis (CVST). CVST is the presence of acute thrombosis (a blood clot) in the dural venous sinuses, which drain blood from the brain. Symptoms may include headaches, seizures, abnormal vision and any of the symptoms of stroke, such as weakness of the face and limbs on one side of the body. From WebMD:

Cavernous sinus thrombosis is a very rare, life-threatening condition that can affect adults and children.

In cavernous sinus thrombosis, a blood clot blocks a vein that runs through a hollow space underneath the brain and behind the eye sockets. These veins carry blood from the face and head back to the heart.

The cause of cavernous sinus thrombosis is usually an infection. But other factors may play a role.

Cavernous sinus thrombosis is a serious condition. It causes death in up to 30% of cases.

Symptoms of cavernous sinus thrombosis may include:

This comes after the mainstream media has been repeating Hillary Clinton’s claim that she is merely sick with pneumonia and not a life threatening injury. After weeks of denying that Hillary was even sick despite her coughing fits and calling anyone who said so  a “conspiracy theorist,” after Hillary fell down in public 9/11 memorial the mainstream media needed a new narrative.

At first, Hillary’s campaign said she “overheated,” despite the temperature not being hot out.

DCLeaks.com recently revealed an email to Colin Powell that proves Hillary has had trouble standing before. In an email dated March 14, 2015, Democratic financier Jeffery Leeds told George W. Bush’s former secretary of state, “Sheldon Whitehouse, who is a huge Clinton supporter, said they were both giving speeches at the same event a few months back and she could barely climb the podium steps,”

Wikileaks has previously leaked emails where Hillary’s aides were researching provigil a drug used for treating narcolepsy and patients with Alzheimer’s, Parkinson’s, and Multiple Sclerosis who have excessive sleepiness.”

Popular author Mike Cernovich has released a doctor’s evaluation that Hillary does indeed have Parkinson’s disease.

We have now seen a new milestone in mainstream media deception. Never has the media fought so hard to debunk and outright lie about a presidential candidate obvious health problems, to the point where the media changes its narrative multiple times in a day, parroting whatever the Clinton campaign tells them to repeat.

It’s going to bite them in the ass in the end though,  as people see the mainstream media at face value for what it is – a PR rep for the military-industrial complex and it’s puppet politicians.