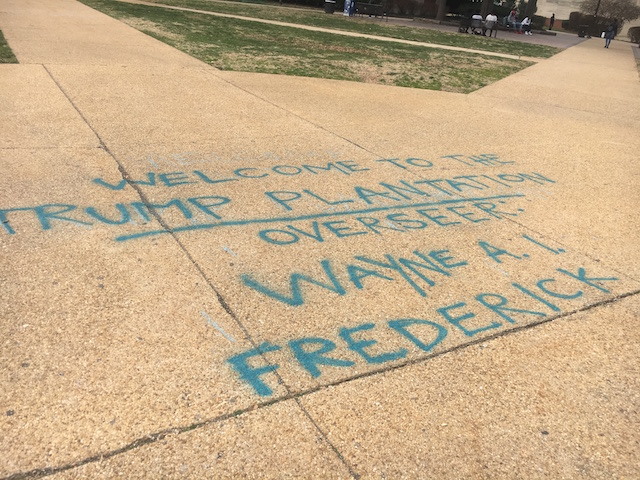 Howard University was vandalized after the institution’s president met with Donald Trump, and other leaders of historically black colleges and universities, on Monday.

Following Howard University President Wayne A.I. Frederick attending the meeting with President Trump, a message spray painted on the sidewalk accused him of being the “overseer” of the “Trump plantation.”

On today's episode of Only @ Howard …??? pic.twitter.com/pqkui0zHKh

One day after Trump’s meeting with the leaders of HBCUs, he signed an executive order to help strengthen the institutions — a move which many lobbied the Obama Administration to undertake, though he never responded.

The order moves the Initiative on Historically Black Colleges and Universities from the Department of Education into the executive office of the White House so that they will be prioritized in the federal budget and critical jobs initiatives.

Despite the positive outcome of the meeting, many students remain outraged despite the benefit to their own place of learning.

In response to the vandalism on Howard's campus from President Frederick. pic.twitter.com/AzF8oypoNT

In a statement about the vandalism, Frederick wrote:

“Freedom of expression is embedded in our founding principles. As a campus administration, we have honored this principle by defending the right of community members who often express a wide range of often conflicting points of view. Howard University has long been a safe haven for such discourse, welcoming opposing views and providing a platform for stimulating dialog among students, faculty, staff, and alumni alike. Moreover, we are choosing to defend the right to free expression at a historic moment for our nation, when this right is once again of insurmountable importance,” the statement read. “While I respect freedom of expression, I strongly oppose vandalism as a form of expression.”

Frederick has also faced backlash after the university was visited by Secretary of Education Betsy DeVos.

“Howard University is pleased that Betsy DeVos, the new Secretary of Education, chose to visit our institution as her first official campus visit,” Frederick said in a statement at the time. “We have a longstanding, successful relationship with the Department of Education, and I look forward to advancing this relationship under the Secretary’s leadership.”

A radical left group on the campus, calling themselves HUResist, issued a series of demands that the university now reject federal funding in protest of Trump. It is unclear if they volunteered to pay for the lost funding from their own wallets. Howard received roughly $222 million in federal funding for the university and hospital in 2016, according to a report from The Washington Post.