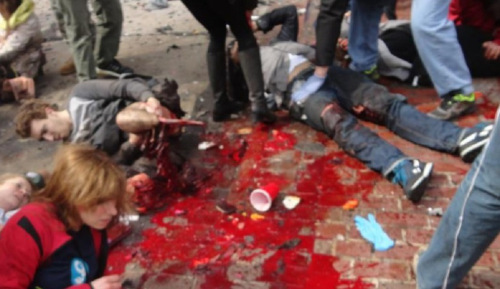 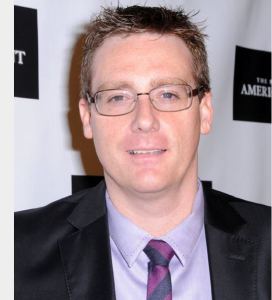 (authenticenlightenment.com)Nathan (Nathaniel) Folks is a film producer and talent manager who has been in the entertainment industry since 1997 when he worked at Paramount Pictures marketing the blockbuster motion picture, Titanic, starring Leonardo DiCaprio.

In an interview with the Voice of Russia’s John Robles, Folks says that back in April 2013 as he was watching the events of the Boston Marathon bombings unfold, based on his experience and expertise as a movie producer, he thought that some things just “didn’t add up” and became convinced that the bombings were a false flag designed to instill “the fear factor” in us, “to keep us scared for as long as they can.” The Boston bombing wasn’t real but a “hyper-reality film-making.” It was a “terrorism that never happened.”

Folks says that he knows some of the people “who were involved” in the Boston “hyper-reality filmmaking.” He defines “hyper-reality film-making” as a “very common thing you do in the military” where filmmakers create a “hyper reality scene” that is made as real as possible so that the military “can be well adjusted to a real scene in Iraq or any other kind of war zone.” In a hyper-reality scene, people can see and feel and help what appears to be a real injured person, but the “injured person” is actually an amputee crisis actor, with help from a makeup artist. (See “Did you know there are AMPUTEE crisis actors?”)

As Folks was watching the “hyper reality scene” unfold in the streets of Boston, he was thinking “they were able to get away with this!” As he watched the “supposedly live television broadcasting,” he knew it wasn’t live at all, but edited, because:

In live footage, “you don’t cut from one scene to another.”
The supposedly live TV footage was using an older technology that’s “grainy” instead of the HD (high definition) available in 2013.
Asked about Jeff Bauman, who supposedly had both of his legs blown off at the marathon:

1. Folks (and others) observed that the pic below is staged. Notice the red paint: Blood is never such a bright red. Bauman is the man with a stick attached to one of his amputated legs. No blood in area where his leg was apparently severed and what is supposed to be a bone is much too thin and straight to be a lower leg bone. The expression on his face is entirely inconsistent with someone who just had both of his legs blown off.

Bauman
2. Paramedics and doctors know that someone who’s lost both of his legs must not be moved, and “certainly” not be put in a wheelchair and carted down the road. But that’s exactly what they did to Bauman.

3. Someone who lost both legs would spend at least a year recuperating. Instead,Bauman was at a Bruins hockey game on May 4, 2013 (see pic below), which was exactly 19 days after he had both legs blown off. That’s some miraculous recovery!

Folks thinks it’s “comical” that “they” actually did that with Bauman and “think we all buy this.” He insists “The truth has to come out, people are not going to sit there and be made a mockery.”

Asked about green screens being used at the bombing, Folks says “they” used “a second screen in order to reenact the scene over and over to get it right, and by using the green screen they were able to show the buildings that were actually on Boylston Street.” (The two bombings took place, seconds apart, on Boylston St.)

Note: Green screen or chroma key compositing is commonly used for weather forecast broadcasts, wherein the meteorologist is usually seen standing in front of a large CGI map during live television newscasts, though in actuality it is a large blue or green background.

Folks compares the Boston bombing to the movie Titanic, where we see the boat sink and people drowning but, of course, all of that weren’t actually happening. We, the moviegoers, are watching it on green screen with a digital layer of real-action people and the boat “sinking” in the background. Folks says “That’s what they did” in Boston but “they did it on television,” where the street scene is real, but when “they reenact the people that were hurt, they had to add the blood and the amputees and the makeup.”

Folks says “you can see the person who put on the makeup on these people,” and refers in particular to a “woman in pink” with a make-up bag who “goes to each victim. She’s not helping them! She’s putting their makeup on.”

Folks: “I’m not fooled and I’m not going to let everyone else be fooled. Someone has to speak out against it and they can follow me, they can do whatever they want, but at the end of day, the truth has to come out sometime.”

Folks says he began speaking out right after the bombings. Then strange things started happening to him. He became very sick although he’s “never been sick” in his life. He “couldn’t hold water, couldn’t hold food,” and was hospitalized for a total of 22 days in the course of 3 months. Folks suspects it was some kind of poison but the doctors “couldn’t determine what it was.” It nearly killed him. It took him 3 to 6 months of rehabilitation to get back on his feet.

Folks says other people who had spoken out about the Boston bombing hoax at the same time as he was, e.g., “the guy who runs [the website] Natural News,” also were poisoned. Some “disappeared.”

Lastly, Folks says whoever put together the Boston bombing hoax was not very good at it. Tongue in cheek, he recommends that “they” should have hired the real pros — Hollywood producers.

I found the following information on traumatic amputation (loss of limbs) from WebMD:

WebMD: First aid to someone experiencing traumatic amputation should include “Have the injured person lie down and elevate the site that is bleeding.” Instead of transporting Jeff Bauman on a stretcher with his leg-stumps elevated, he was seated and trundled away in a wheelchair.
WebMD: “The trauma of the accident or severe blood loss can cause the person to go into physiologic shock. Signs of physiologic shock include:
Passing out (losing consciousness).
Feeling very dizzy or lightheaded, like the person may pass out.
Feeling very weak or having trouble standing up.
Being less alert. The person may suddenly be unable to respond to questions, or he or she may be confused, restless, or fearful.”
Jeff Bauman not only did not pass out (as you can see in the pic of him being carted away in a wheelchair), he was so alert and retained such presence-of-mind, despite having both legs blown off (just imagine that happening to you), that “Bauman was later able to provide detailed descriptions to the authorities of a suspect who was seen placing a backpack beside him at the bombing scene two and a half minutes before it exploded, enabling the photo to be identified and circulated quickly.” (Wikipedia)

WebMD: “Ideally, the wound [from the surgical amputation of all or part of a limb or extremity such as an arm, leg, foot, hand, toe, or finger] should fully heal in about four to eight weeks.” But Jeff Bauman managed to be fully healed as to attend a Bruins hockey game a mere 19 days after having both legs blown off — which is 9 days BEFORE the minimum ideal healing period of four weeks.
Update (Dec. 27, 2014):

Dr. Lorraine Day, an orthopedic trauma surgeon who for 25 years was Chief of Orthopedic Surgery at St. Francisco General Hospital, confirms many of Folks’ observations (read her article in PDF here):

1. In the pictures taken immediately after the blast, there was no blood on the ground. That could never be. The bomb blast instantaneously would have spread blood from the injured everywhere.

2. When “blood” does eventually appear on the sidewalk at ground zero, it clearly is some kind of bright orange-red paint, not blood. Real blood is dark maroon in color.

4. In the early pictures, many “handlers” can be seen positioning “victims” and assisting in the set-up of the hoax scene.

5. There are no EMTs (Emergency Medical Technicians) at the scene, no ambulances, and no fire engines. Where are they? The people helping the “victims” are also crisis actors.

6. Wheel chairs may be available along a marathon route but they are NEVER found in ambulances, and wheelchairs are NEVER used to transport severely injured victims. When a victim has lost a lot of blood [as in the case of Jeff Bauman], he or she is always kept flat and transported on a gurney. To do otherwise would put the life of the victim at severe risk.

7. In Bauman’s case, if a person has both legs blown off, his blood loss would be so severe that if someone sat him up [as Bauman did], he would lose consciousness because his heart could not pump enough blood to supply his brain when he was in the upright position, and he would die.

8. Bauman’s gory “blown-off leg” was nothing but a prosthesis that is a very poor replica of a real amputated limb. The “injuries” and “blood spatter” are so poorly done, they are almost comical to a trauma surgeon “such as myself.”

9. 4 or 5 days after Bauman had his legs blown off, he was photographed in the hospital giving a thumbs-up, happy-faced smile. “This is ludicrous.” When a person loses even one limb, there is a “grieving” process that goes on for weeks.