Last week, the US and Saudi Arabia both showered Yemen with airstrikes. On paper, these strikes had two very different targets. Washington’s intended target was al-Qaeda. Saudi Arabia’s target was Popular Resistance locations, the Houthis, and pretty much everything in between. Well, everything besides al-Qaeda locations, of course.

READ MORE: Is the US Targeting al-Qaeda or the Houthis?

The United States might claim they are targeting al-Qaeda positions. But they aren’t making any effort to strike the large swathes of land al-Qaeda controls in former South Yemen. Instead they are only focusing on bombing locations contested between Houthi and al-Qaeda forces. Even prompting one journalist to out-right accuse the United States of specifically targeting the Houthis. This is not a far-fetched suggestion at all. 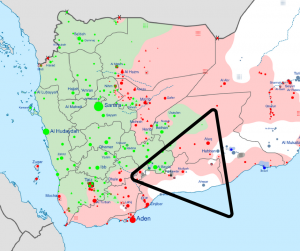 Being an anti-imperialist force, the Revolutionary Committee (which includes the Houthis) has condemned both Saudi and US airstrikes and all violence carried out by these powers on Yemeni soil.

“The military operations carried out by the US warplanes that had claimed to fight al-Qaeda elements in Bayda, Abyan and Shabwah provinces were a condemnable and unacceptable step as they violate the sovereignty of the Republic of Yemen.” The Revolutionary Committee said in a statement to Saba News Agency.

Furthermore, the Houthis have reminded the United States that if they want to eliminate al-Qaeda, they must cooperate with other groups who actually seek to eliminate the terrorist group.

“The attacks will never be fruitful without security and intelligence cooperation with our authorities which fight Al-Qaeda and Daesh. [the current US operation] will not achieve their goals because they are based on false information supplied by the sponsors of Al-Qaeda and its sisters.” The Houthis said as reported by Anadolu News Agency.

Indeed, if the United States wants to eliminate al-Qaeda in Yemen, then they can’t share intelligence and cooperate with states that are responsible for helping support al-Qaeda and other terrorist organizations. For all intents and purposes, al-Qaeda is a US ally in Yemen. The terror group is also fighting the Houthis and Popular Resistance forces. This makes them a de facto ally of Saudi Arabia.

In addition to Saudi Arabia, the US-coalition in Yemen includes Qatar and the UAE among others. States which Hilary Clinton herself admitted provide “clandestine support” for groups like ISIS and al-Qaeda. Saudi Arabia also admits that some 2 thousand Saudi citizens are fighting abroad in terror groups. Many are in Syria, but many are probably also in Yemen.

If the United States actually wants to eliminate al-Qaeda– like they claim– then why are they supporting and cooperating with al-Qaeda’s allies?