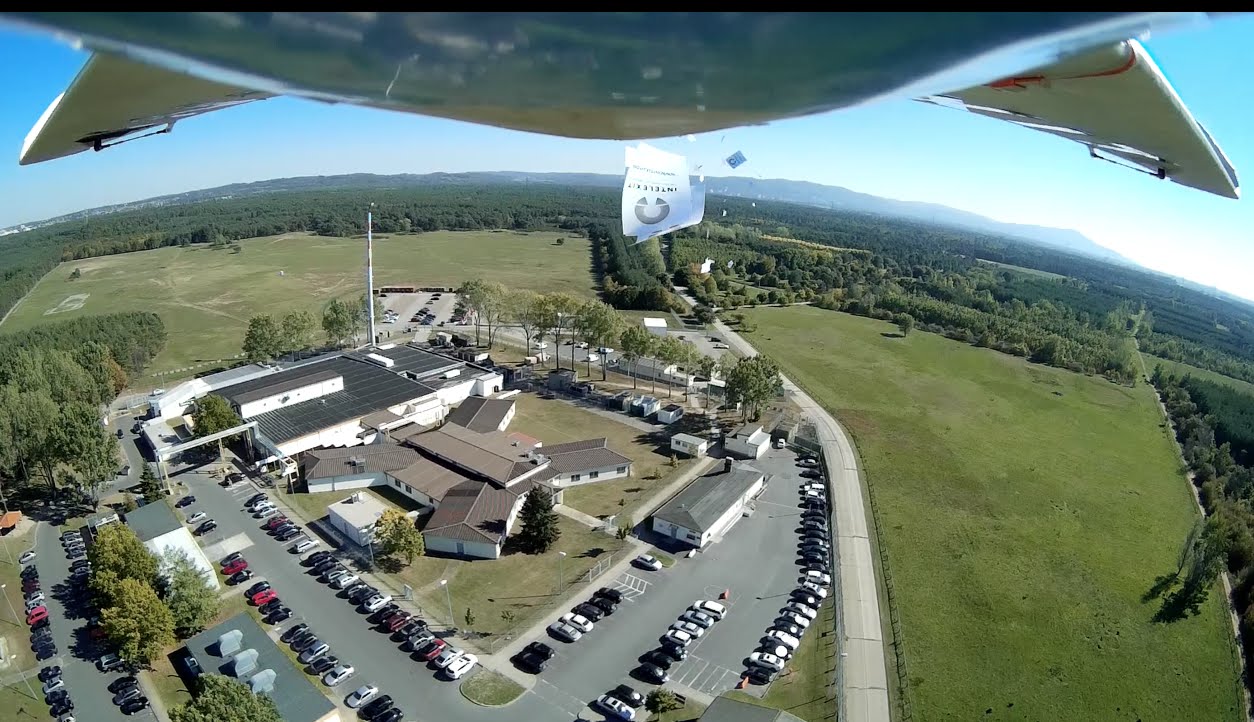 Peng!, a tactical media and activist group, used a remote-controlled plane to drop flyers over a U.S. military base in Germany that serves as the NSA’s European hub of signals intelligence known as the Dagger Complex. The flyers were designed by Intelexit, the specific campaign Peng! launched to encourage security agency employees to quit their jobs. A video posted to Youtube shows footage from the remote-controlled plane intercut with panoramic shots of the flying overhead.

If the group’s past efforts are any indication, the flyers likely appealed to security agency employees’ sense of morality. Last week, Peng and Intelexit launched a billboard advertising campaign near the NSA’s Fort Meade headquarters, the GCHQ (Government Communications Headquarters, the U.K.’s spy agency) facility, and the Dagger Complex in Darmstadt, Germany. Outside the Dagger Complex, a billboard reads, “[L]isten to your heart, not to private phone calls.” Outside the GCHQ headquarters in Cheltenham, an ad quips that “the intelligence community needs a backdoor.” One sign attached to a van that circled Fort Meade last week read, “Hoped to serve your people? Ended up spying on them? Exit Intelligence.”

Friday’s air-dropped flyers constitute another tactic of Peng and Intelexit’s campaign to reach employees who may have reservations about their careers.

“We know for a fact that there are many, many people working there who are conflicted, anxious and ultimately completely against what these agencies are doing,” said Ariel Fischer, a “pseudonymous spokesperson” for Intelexit.

The flyers and ads direct potential surveillance defectors to the Intelexit website, which, as Wired summarized, “features a set of arguments against working in surveillance, a tool for composing a resignation letter based on a survey of principles an intelligence employee can fill out, and a video featuring testimonials from figures like crypto guru Bruce Schneier and NSA whistleblower Thomas Drake.”

Drake is a former NSA employee who exposed the agency’s invasive and costly Trailblazer program in 2005. He was pushed out of the agency, lost his security clearance, and was indicted for leaking documents, only to have his charge reduced to a misdemeanor since he did not leak classified documents to a reporter. Drake joined the Intelexit project in order to show others on the inside that it is possible to leave the intelligence community.

The NSA declined to comment on Intelexit’s billboard campaign last week, though the GCHQ insisted its standards and practices are moral.

“The work of GCHQ is carried out within a strict legal framework and there is no question of anyone being asked to do anything unlawful or which they consider to be unethical,” a statement said. “GCHQ actively encourages staff to discuss any concerns they might have about their work and we pride ourselves on the structures we have in place to support this.”

“In some cases you do need a mirror that shows you that you have the choice to leave. And knowing that there are people who have gone through this before helps make that choice.”

The flyer and ad campaigns are accompanied by ongoing fax, email, and phone call campaign to NSA employees.

This article (Watch Activists Airdrop Flyers onto an NSA Base Urging Agents to Quit Their Jobs) is free and open source. You have permission to republish this article under a Creative Commons license with attribution to Carey Wedler andtheAntiMedia.org. Anti-Media Radio airs weeknights at 11pm Eastern/8pm Pacific. If you spot a typo, email edits@theantimedia.org.
Read more at http://www.punkrocklibertarians.com/watch-activists-airdrop-flyers-onto-nsa-base-urging-agents-quit-jobs/#4F74OxUCFGBLIdVx.99