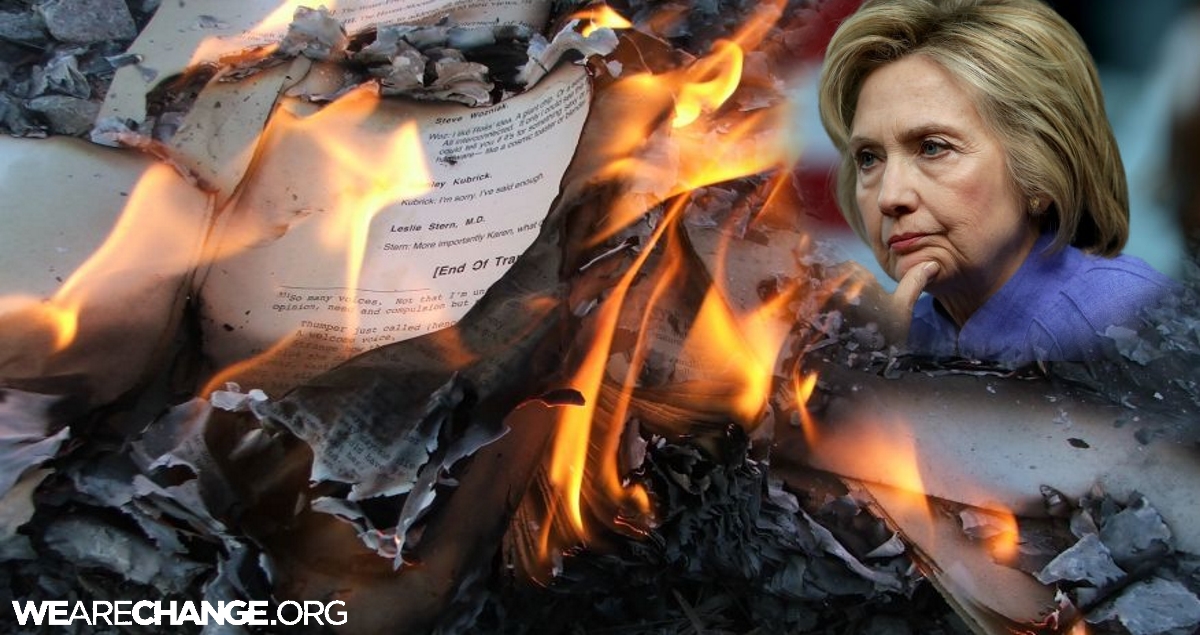 Hillary Clinton’s closest aide revealed in a deposition last week that her boss destroyed at least some of her schedules as secretary of state — a revelation that could complicate matters for the presumptive Democratic nominee, who, along with the State Department she ran, is facing numerous lawsuits seeking those public records.

Huma Abedin was deposed in connection with a Freedom of Information Act lawsuit into Clinton’s emails — but her admission could be relevant to another lawsuit seeking Clinton’s schedules.

“If there was a schedule that was created that was her Secretary of State daily schedule, and a copy of that was then put in the burn bag, that?.?.?. that certainly happened on?.?.?.?on more than one occasion,” Abedin told lawyers representing Judicial Watch, the conservative organization behind the emails lawsuit.

Abedin made the surprising admission in response to a question about document destruction at the Department of State. A lawyer for Judicial Watch asked: “And during your tenure at the State Department, were you aware of your obligation not to delete federal records or destroy federal records?”

‘I’ve never seen anyone put their schedule in the burn bag.’

Abedin was not pressed for more details.

Clinton has admitted to destroying “private personal emails” as secretary of state. But Abedin’s admission that she used so-called “burn bags” — a container that material is placed in before it is destroyed — for some of her schedules is the first time anyone close to her has disclosed destroying public records.

A former State Department official told The Post it was unprecedented for a diplomat to destroy a schedule like this.

“I spent eight years at the State Department and watched as four US ambassadors and two secretaries of state shared their daily schedules with a variety of State Department employees and US officials,” said Richard Grenell, former diplomat and US spokesman at the United Nations.

“I’ve never seen anyone put their schedule in the burn bag — because every one of them had astate.gov email address and therefore their daily schedules became public records, as required by law.”

Others said Clinton’s careful approach to her schedule further highlights her recklessness in using a personal server for all her email communications.

“The [president’s] schedule was not classified but it was deemed ‘highly sensitive.’ Instructions were given at the White House and on the road that schedules would be disposed of through the use of ‘burn bags’ and/or shredding,” said Brad Blakeman, a scheduler for President George W. Bush.

“This shows, in my opinion, a skewed sense of security. The Clinton people would dispose of the secretary’s schedule in the same manner as if it were classified yet those same safeguards were not in place with regard to email communications.”

Ambassador John Bolton, a Clinton critic, said the matter shows Clinton’s “recklessness” regarding her emails. But he noted it’s unlikely Clinton could have completely destroyed her schedules.

“They can’t eliminate it even if they wanted to,” Bolton said.

The Associated Press has been seeking Clinton’s schedule through Freedom of Information Act requests asking for Clinton’s public and private calendars and schedules from Jan. 21, 2009, through Feb. 1, 2013. The wire service sued the State Department for those schedules in 2015.