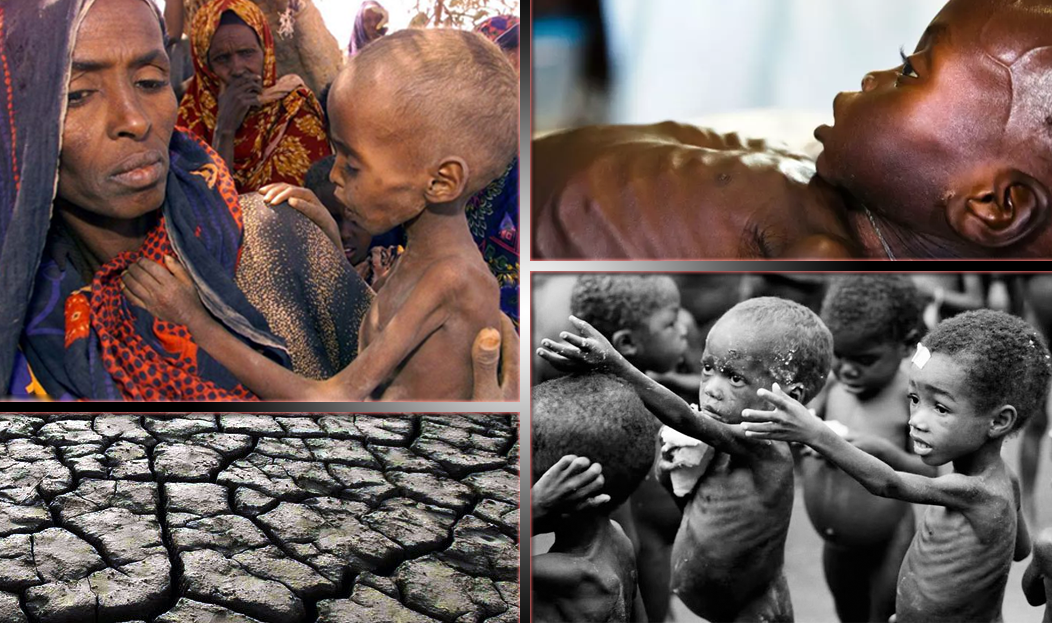 East Africa is currently experiencing the worst drought in the last sixty years which has caused famine and starvation in Somalia. You wouldn’t know it by looking at the lame stream media.

The last officially declared famine was in 2011 when more than a quarter of a million (250,000+) people died. Reports from the ground say there is no doubt that this famine will be worse.

This should be the biggest story in the world right now. pic.twitter.com/5jhlO2OqI4

According to the UN’s office of Coordination of Humanitarian Affairs (OCHA), the current crisis has affected 10 million people, led to 640 thousand malnourished children, killed nearly 29 thousand and placed half a million others at risk.

Where are people starving right now?

In late February a famine was declared in South Sudan and warnings of famine have also recently been issued for Somalia, Nigeria and Yemen.

According to UNICEF, nearly 1.4 million children are at imminent risk of death. 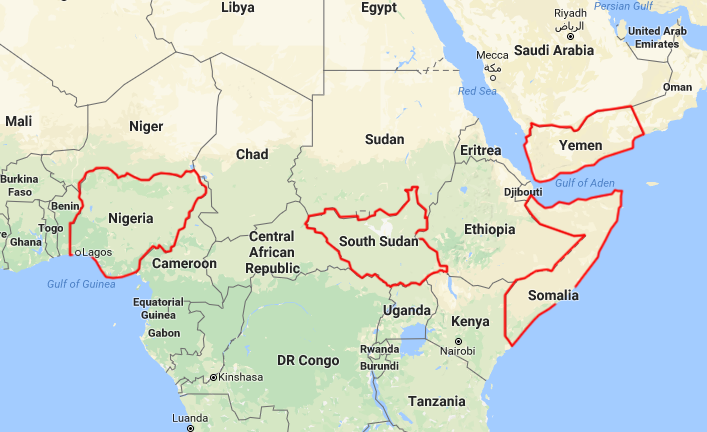 Secretary-General of the UN, António Guterres, went to Somalia earlier this month and saw the suffering.

Just arrived in Somalia on emergency visit to focus on famine & cholera. People are dying. The world must act now to stop this.

Failure of the Deyr rains and poor spring forecast threaten a repeat of the catastrophe of 2011. Drought conditions are threatening an already fragile population, battered by decades of conflict. Almost half the population, or 6.2 million people, are facing acute food insecurity and are in need of humanitarian assistance. Some 185,000 children are expected to suffer from severe acute malnutrition this year. This figure is expected to rise to 270,000 in the next few months.

Famine may have occurred in 2016 in Borno State and could be ongoing in areas that are inaccessible to aid workers. In the conflict-affected states of Adamawa, Borno and Yobi, the number of children with severe acute malnutrition is expected to reach 450,000 this year. Late last year, Fews Net, the famine early warning system which monitors food insecurity, indicated that famine had likely occurred in some previously inaccessible areas of Borno states. It is likely ongoing in other areas which remain beyond humanitarian reach.

7 to 10 million people urgently need food assistance in Yemen. Famine is possible in the worst-case scenario, amidst heavy conflict and the deteriorating macroeconomic atmosphere. Conflict has been raging for the past two years with 462,000 children currently suffering from severe acute malnutrition – a nearly 200 per cent increase since 2014.

A country reeling from conflict, poverty and insecurity with over 270,000 severely malnourished children. Famine has just recently been declared in parts of Unity State in the northern central part of the country. 20,000 children live in this area.

If nothing is done to curb the severity and spread of the food crisis, the total number of food insecure people across the country is expected to rise from 4.9 million to 5.5 million at the height of the lean season in July.

Actionaid.org report that Ethiopia and Kenya are also in dire need.

Media coverage of a disaster has proven to have a direct affect on donations. According to Caryl Stern, the president and chief executive officer of the U.S. fund for UNICEF:

To put the lack of funding into perspective; around $24 million has been donated to 20 of the top U.S. humanitarian groups working on the crisis to date.

The American military budget is ranked first place in the world; an unimaginable $597 billion.

As Lee Camp and Rodrigo Campos point out, the UN needs just $4.4B to end the crisis.

Food assistance needs in 2017 are unprecedented. Across 45 countries, some 70 million people will require emergency food assistance, 40% more than in 2015.

To save lives, governments and the international community must ramp up efforts to resolve conflict, ensure humanitarian access and make more resources available for emergency response.

The trouble with making direct donations to these countries is that the rich elite running the countries often intercept donations, and the NGOs pledged to help often pocket donations.

So what can you do? If you know an honest charity helping in the region, post in the comments below.