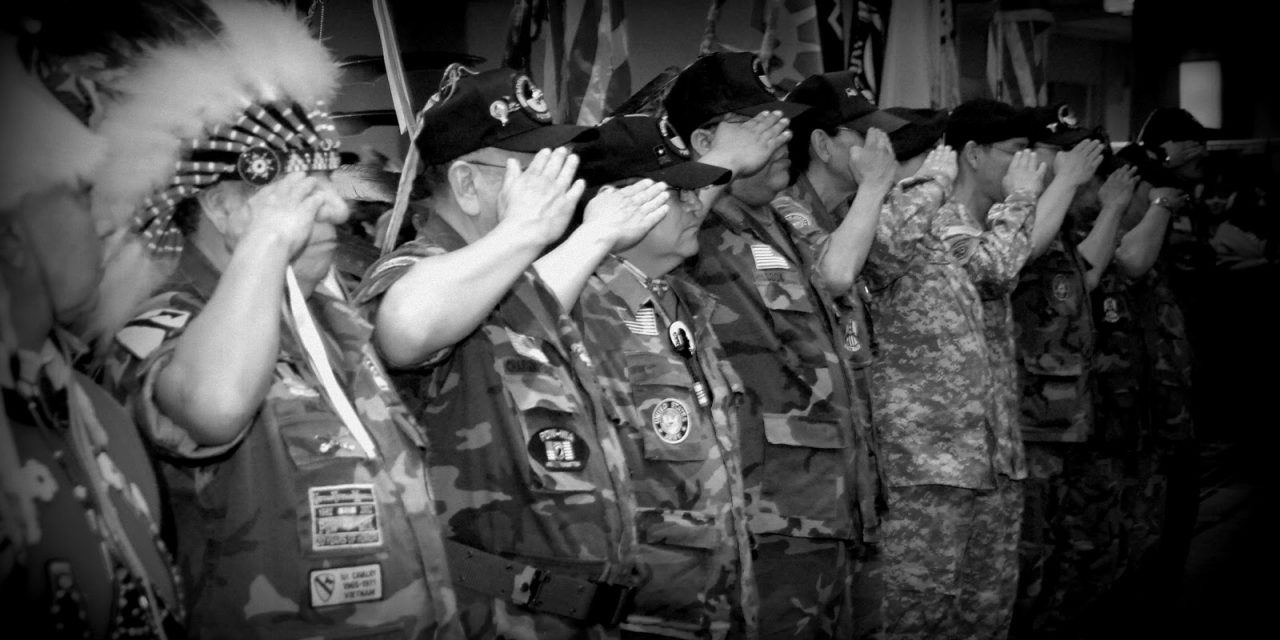 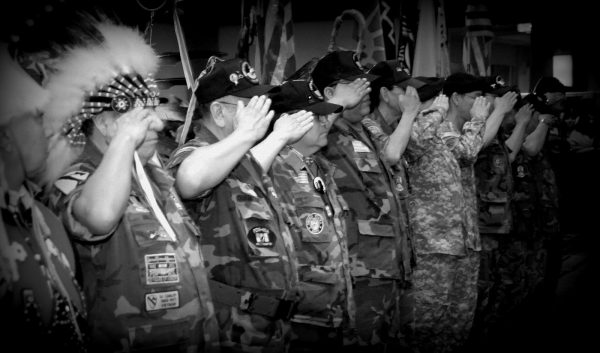 (ANTIMEDIA) As protesters continue to stand against the proposed Dakota Access Pipeline in North Dakota, facing off against heavily militarized police and their water cannons, rubber bullets, tear gas, and tasers, they have gained broad support. Celebrities and millions of social media users have raised awareness about the situation in North Dakota, and now, the “water protectors” have earned support from another group: veterans.

According to an article published by Business Insider that first appeared in Task and Purpose, a military-oriented news and culture site, two veterans are leading the charge in a show of dissent against the increasingly aggressive police. In the last several months, tensions have escalated as Natives and their allies have blocked the pipeline’s construction, citing fears surrounding water will be endangered and sacred burial sites will be destroyed (not to mention the fact their lands were forcibly stolen by the U.S. government over a century ago).

“This country is repressing our people,” says Michael A. Wood Jr., a Marine Corps veteran who recently retired from the Baltimore police force to work toward reforming law enforcement. “If we’re going to be heroes, if we’re really going to be those veterans that this country praises, well, then we need to do the things that we actually said we’re going to do when we took the oath to defend the Constitution from enemies foreign and domestic,” he asserted about his plans to go to Standing Rock.

Woods Jr. is joined by Wes Clark Jr. Clark Jr. is the son of General Wesley Clark, the famous military leader who once warned that shortly after 9/11, the government had its eyes on Iraq, Syria, Lebanon, Libya, Somalia, Sudan, and Iran. Clark would later attempt to distance himself from those statements but still managed to convince his son, a member of the Army at the time, to stay away from Iraq.

“I was like, ‘I’m going back in. I’m going to go in there and fuck people up,’” Clark Jr. recalls of his desire to fight for the military after 9/11. He later changed his mind after his father warned him, as Task and Purpose summarized, “that as a soldier he would be fighting a war that had nothing to do with defeating al Qaeda.”

[ In the video above Sophia Wilansky’s Father talks about whats its like to have his daughers arm blown apart by the police at the Dakota Access protests. He claims a woman who was a veteran of the US army helped his daughter get help with her injury]

Now, Wood Jr. and Clark Jr. are attempting to organize a mass, nonviolent protest against police action in North Dakota. Just this past weekend, a female protester was hit with a concussion grenade, causing severe damagee to her arm and requiring surgery.

Other have been tear gassed, tased, beaten, and shot with rubber bullets. Anti-Media journalist Derrick Broze was tasedby law enforcement immediately after he declared he was a member of the media. Another journalist was shot with a rubber bullet while standing away from a gathering of protesters as she interviewed an attendee.

Police have made over 470 arrests since August, and the Indigenous Environmental Network claims 167 people were injured just this past Sunday when police deployed water cannons in freezing weather.

Clark, a contributor to the Young Turks, explained that aside from the flagrant violations protesters are subject to in North Dakota, Natives are especially deserving of veteran support:

“First Americans have served in the Unites States Military, defending the soil of our homelands, at a greater percentage than any other group of Americans. There is no other people more deserving of veteran support,” he said.

According to a Facebook event the two men created called “Veterans Stand for Standing Rock,” those who join the effort will arrive at the protest site on December 4, where they will stay until December 7.

“Come to Standing Rock Indian Reservation and hold the line with Wes Clark jr, Michael Wood Jr, Tulsi Gabbard and hundreds of other veterans in support of the Sioux nation against the DAPL pipeline. Bring Body armor, gas masks, earplugs AND shooting mufflers (we may be facing a sound cannon) but no drugs, alcohol or weapons.”

Clark Jr. was clear he was not looking for violence and that the protest would be unarmed.

“We’re not going out there to get in a fight with anyone,” he said. “They can feel free to beat us up, but we’re 100% nonviolence.”

As Task and Purpose explained:

“With an eye toward the media, old military uniforms will be donned so that if the veterans are brutalized by the police, they are brutalized not as ordinary citizens, but as people who once served the government they are protesting against.”

The event page makes it clear that the group will not tolerate “hate, violence or divisive behavior of any kind.”

“We’re doing this to support our country,” they advise, “so let’s do it with honor, working together. We can stop this savage injustice being committed right here at home. If not us, who? If not now, when?”

Over 250 veterans have already committed, but organizers hope to have a group of 500 or more by the time they head to Standing Rock.

Once there, the  veterans intend to engage in a traditional native healing ceremony with protesters, with whom they have been coordinating, according to the veterans. Then, protective gear like gas masks and body armor will be issued to anyone who needs it. The soldiers will march to bagpipes and Sioux war songs as they head to the banks of the Missouri River to meet police.

“Then, the veterans and their allies — or at least the ones who are brave enough — will lock arms and cross the river in a ‘massive line’ for their ‘first encounter’ with the ‘opposing forces.’”

Though the veterans have adopted a strict policy of nonviolence, they refuse to back down and apparently hope to use their military status to spotlight the egregious behavior of the police.

Veterans Stand for Standing Rock is accepting donations to cover food, transportation, and supplies for those who travel to North Dakota. You can donate here. You can also donate directly to the water protectors.

This article (Hundreds of Veterans Heading to Standing Rock to Defend DAPL Protesters from Police) is free and open source. You have permission to republish this article under a Creative Commons license with attribution to Carey Wedler andtheAntiMedia.org. Anti-Media Radio airs weeknights at 11 pm Eastern/8 pm Pacific. If you spot a typo, please email the error and name of the article to edits@theantimedia.org.