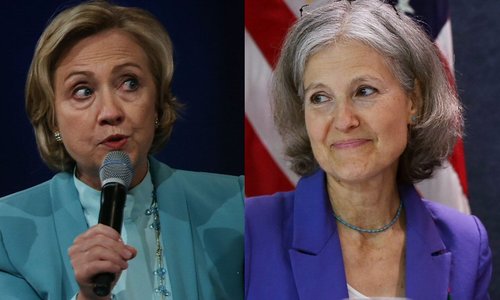 Green party candidate Jill Stein has decided to launch a #Recount2016 campaign using the people and Twitter as her platform to fund an investigation into the polls in three swing states: Wisconsin, Michigan and Pennsylvania.

Although a spokeswoman for Jill Stein said the “campaign has not yet filed the official paperwork for the recounts and that the campaign requires $2 million to pay for the filing fees and the actual recount process.” Deadlines are looming with only days remaining. The deadlines are Friday in Wisconsin, Monday in Pennsylvania and Wednesday in Michigan.

It's official: Jill Stein announces plans to file for a recount in PA, MI & WI. From her release: pic.twitter.com/Yh0gcVBPOR

Jill Stein launched the campaign citing hacks during the run for the White House, including voter and party database hacking and email accounts.

Although there was no evidence of voting fraud presented, Stein claims that some of the election machines used in Wisconsin “were banned in California because they were highly vulnerable to hacking and malicious reprogramming.”

“Reported hacks into voter and party databases and individual email accounts are causing many Americans to wonder if our election results are reliable,” said Stein in a statement on her website.

Last week election “security experts” were urging Hillary Clinton’s campaign to contest the results and investigate the swing states that Stein is now pushing for an audit of the election results.

“The only way to know whether a cyberattack changed the result is to closely examine the available physical evidence?—?paper ballots and voting equipment in critical states like Wisconsin, Michigan, and Pennsylvania. Unfortunately, nobody is ever going to examine that evidence unless candidates in those states act now, in the next several days, to petition for recounts,” said J. Alex Halderman, Professor of Computer Science at University of Michigan.

Jill Stein wouldn’t benefit from an audit of the vote according to the New York Times, Stein received a measly 1.1% of the vote in Michigan and Wisconsin and 0.8% in Pennsylvania. So there is no chance in hell a recount could benefit her in any way shape or form, but it could potentially benefit Hillary Clinton. Jill Stein has previously attacked Clinton, saying Trump is a better choice than Hillary and that “Hillary would cause nuclear war.”

It seems the 2016 election insanity isn’t over yet. What will the results of the audit of the vote uncover on both sides? Because, it’s happening..

The question must be asked. What happens if vote rigging is found on the Republican side? Donald Trump v.s. Hillary Clinton. They both suck, but which one is more dangerous? America is playing with fire quite literally. As the Russian Kremlin has warned that if it was a Hillary Clinton victory it would have been world war three.