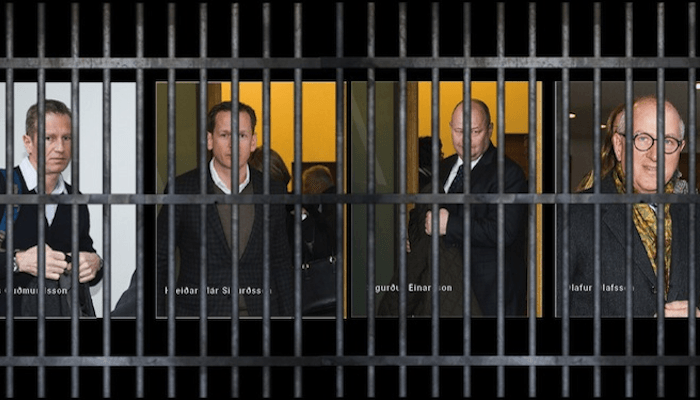 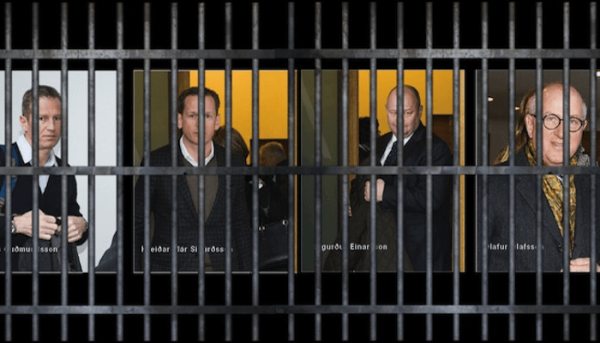 (Source: AmericanNewsx) – Iceland just sentenced their 26th banker to prison for his part in the 2008 economic collapse. The charges ranged from breach of fiduciary duties to market manipulation to embezzlement.
When most people think of Iceland, they envision fire and ice. Major volcanoes and vast ice fields are abundant due to its position on the northern part of the Mid-Atlantic Ridge. (A hot July day in Reykjavik is around 55 degrees.) However, Iceland is also noted for being one of the Nordic Socialist countries, complete with universal health care, free education and a lot other Tea Potty nightmares. Therefore, as you might imagine, they tend to view and react to economic situations slightly differently than the U.S.
When the banking induced “Great Recession of ’08” struck, Iceland’s economic hit was among the hardest. However, instead of rewarding fraudulent banking procedures with tons of bailout money, they took a different path.
Prior to the recession, Iceland had one of the more thriving economies in the world, in spite of the fact that their total population (327,000) wouldn’t even fill a mid-sized American city. When the recession struck, they were among the earliest and hardest hit. However, instead of running to the vaults to shower the banks with money, they let the banks fail. They also resisted traveling down the European/Republican austerity road. Instead, they kept their social programs intact at a time when they were most needed.
And, they sent fraudulent bankers to jail.
When Iceland’s three major banks collapsed, it resulted in defaults totaling $114 billion in a country with agross domestic product (GDP) of only $19 billion. In October, 2008 the parliament passed emergency legislation to take over the domestic operations of the major banks and established new banks to handle them. They did not, however, take over any of the foreign assets or obligations. Those stayed with the original banks, right into bankruptcy.
They then brought charges against several banking executives for fraud and market manipulation, resulting in sentences ranging from four to five and a half years. As the special prosecutor said,
Why should we have a part of our society that is not being policed or without responsibility?
In the U.S., we simply tapped a few wrists with small fines, that ended up being paid by their respective banks.(Can you say “got off scot free?”)
Sending the bank executives off to play rock hockey for a few years didn’t solve the problem, but it did send a message not to do that again.
At its worst, Icelandic currency, the Icelandic krona (ISK) was trading at around 250 ISK per Euro. In order to qualify for an IMF (International Monetary Fund) loan, Iceland raised interest rates to 18%, which, of course, attracted bank deposits. Iceland also received a $2.5 billion loan from Europe’s Nordic countries.
To power its recovery, Iceland utilized its natural advantages such as its clean, cheap geothermal energy to attract the tech industry. Icelandic commercial fishing remained strong and as the general world economy picked up, the tourist industry bloomed. The deeply depreciated krona also helped make Iceland and Icelandic products very attractive, economically. On the banking front, they facilitated domestic debt restructuring and fiscal adjustments as conditions changed.
As to how it has all turned out, here’s what the International Monetary Fund Survey has to say about it:
Iceland has rebounded after the 2008/9 crisis and will soon surpass pre-crisis output levels with strong performance in tourism and fisheries. Debt ratios are on a downward path and balance sheets have broadly been restored. The financial sector is back on track though with some important items remaining on the docket.
As the above survey also states, Iceland is “the first 2008-10 crisis country in Europe to surpass its pre-crisis peak of economic output.”
The krona is now running 142 ISK per Euro. (up from 290/1 in 2008) The 2014 inflation rate was 2.05%.(down from 12.59% in 2008) The wage index is running at 190.9. (up from 132.8 in 2008)
Btw, they did all this while keeping their social welfare intact. (There goes another bagger day-dream.)
Iceland’s President, Olafur Ragnar Grimmson explained how the country managed to recover from the global financial disaster,
We were wise enough not to follow the traditional prevailing orthodoxies of the Western financial world in the last 30 years. We introduced currency controls, we let the banks fail, we provided support for the poor, and we didn’t introduce austerity measures like you’re seeing in Europe.
When asked whether or not other countries, Europe in particular, would succeed with Iceland’s “let the banks fail” policy, President Grimmson gave his answer,
Why are the banks considered to be the holy churches of the modern economy? Why are private banks not like airlines and telecommunication companies and allowed to go bankrupt if they have been run in an irresponsible way? The theory that you have to bail out banks is a theory that you allow bankers enjoy for their own profit, their success, and then let ordinary people bear their failure through taxes and austerity. ?People in enlightened democracies are not going to accept that in the long run.