If Sweden and Germany Became US States, They Would be Among the Poorest States

(Mises) OCTOBER 26, 2015 Ryan McMaken
The battle over the assumed success of European socialism continues. Many European countries like Sweden have gained a reputation as being very wealthy in spite of their highly regulated and taxed economies. From there, many assume that the rest of Europe is more of less similar, even if slightly poorer. But if we look more closely at the data, a very different picture emerges, and we find that the median household in the US is better off (income-wise) than the median household in all but three European countries.

Last year, a debate erupted over how Britain would compare to individual US states. In the UK Spectator, Fraser Nelson explained “Why Britain is poorer than any US state, other than Mississippi.” A week later, TIME shot back with an article titled “No, Britain Is Not Poorer than Alabama.” The author of the TIME article, Dan Stewart, explained that, yes, Britain is poorer than many US states, but certainly not all of them. (See below to confirm that the UK is, in fact, poorer than every state.)

The main fault of the Spectator article, its critics alleged, was that it relied primarily on GDP and GDP per capita to make the comparisons. The critics at TIME (and other publications) correctly pointed out that if one is going to draw broad conclusions about poverty among various countries, GDP numbers are arguably not the best metric. For one, GDP per capita can be skewed upward by a small number of ultra-rich persons. After all, it is just GDP divided by the total population. That gives us no idea of how the median household is doing is those areas. Also, it’s best to avoid averages and stick with median values if we’re looking to avoid numbers that can be pulled up by some wealthy outliers. 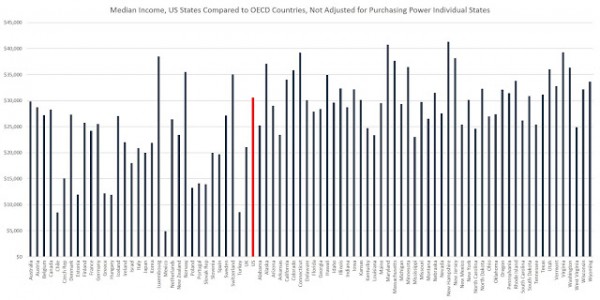 This same criticism was applied to a 2007 study by Swedish economists Fredrik Bergström and Robert Gidehag (and an article by Mark J Perry) who had asserted that according to their calculations, Sweden was poorer than most US states.

The Bergstrom and Gidehag study was no back-of-the-envelope analysis, but given that they did rely largely on GDP per capita data, I thought it might be helpful to use data that relies on median income data instead, so as to better account for inequalities in income and to get a better picture of what the median resident’s purchasing power. Click for full size:

The nationwide median income for the US is in red. To the left of the red column are other OECD countries, and to the right of the red bar are individual US states. These national-level comparisons take into account taxes, and include social benefits (e.g., “welfare” and state-subsidized health care) as income. Purchasing power is adjusted to take differences in the cost of living in different countries into account.

Since Sweden is held up as a sort of promised land by American socialists, let’s compare it first. We find that, if it were to join the US as a state, Sweden would be poorer than all but 12 states, with a median income of $27,167.

With the exception of Luxembourg ($38,502), Norway ($35,528), and Switzerland ($35,083), all countries shown would fail to rank as high-income states were they to become part of the United States. In fact, most would fare worse than Mississippi, the poorest state.

For example, Mississippi has a higher median income ($23,017) than 18 countries measured here. The Czech Republic, Estonia, Greece, Hungary, Ireland, Italy, Japan, Korea, Poland, Portugal, Slovenia, Spain, and the United Kingdom all have median income levels below $23,000 and are thus below every single US state. Not surprisingly, the poorest OECD members (Chile, Mexico, and Turkey) have median incomes far below Mississippi.

We Should Adjust for Purchasing-Power Differences Among States

But, I’m really being too conservative with the US numbers here. I’m comparing OECD countries to US states based on a single nation-wide purchasing power number for the US. We’ve already accounted for cost of living at the national level (using PPP data), but the US is so much larger than all other countries compared here, we really need to consider the regional cost of living in the United States. Were we to calculate real incomes based on the cost of living in each state, we’d find that real purchasing power is even higher in many of the lower-income states than we see above.

Using the BEA’s regional price parity index, we can take now account for the different cost of living in different states, and the new graph looks like this:

This has had the effect of giving us a more realistic view of the purchasing power of the median household in US states. It is also more helpful in comparing individual states to OECD members, many of which have much higher costs of living than places like the American south and midwest. Now that we recognize how inexpensive it is to live in places like Tennessee, Florida, and Kentucky, we find that residents in those states now have higher median incomes that Sweden (a place that’s 30% more expensive than the US) and most other OECD countries measured.

We find something similar when we look at Germany, but in Germany’s case, every single US state shows a higher median income than Germany. Germany’s median income is $25,528. Things look even worse for the United Kingdom which has a median income of $21,033, compared to $26,517 in Mississippi.

None of this analysis should really surprise us. According to the OECD’s own numbers (which take into account taxes and social benefits, the US has higher median disposable income than all but three OECD countries. Sweden ranks below the US in this regard, as does Finland and Denmark.

The fact that the median level in the US is above most OECD countries thus makes it no surprise that most of these countries then rank below most US states. The US states that have income level above the median US level will, not surprisingly, outpace many OECD countries by a considerable margin.

I began with the OECD’s “median disposable income” metric. This is a metric developed by the OECD to compare among all member states. The measure takes into account taxes and social benefits provided.

Then, we must adjust the numbers for purchasing power parity using the World Bank’s index. At that point, we can see how the US compared to other members using dollars across all countries. I provided an analysis at the national level here.

But, in order to compare to individual US states, we have to come up with a way to make US states comparable. The OECD does not measure individual US states, so I had to use the Census Bureau’s measure of median income for a place to start (2012-2013 2-year average medians). The Census numbers are much higher than the OECD numbers for a variety of reasons. In fact, the OECD income number of the US is only 59 percent of the Census number.

When adjusting for cost of living in US states, I then adjusted each state using the regional price parity numbers provided by the Bureau of Economic Affairs.Naturally, median income numbers for individual states are already in US dollars.

Is median income a good metric for poverty comparisons? Maybe, but in any case it’s what OECD and UNICEF use. Typically, the “poverty rate” is calculated as either 50% or 60% of the national median income. So, apparently, the UN and OECD do think it’s a relevant figure, and if poverty rates are going to be invoked as reasons for new public policy, then median incomes must be analyzed.
Tweet