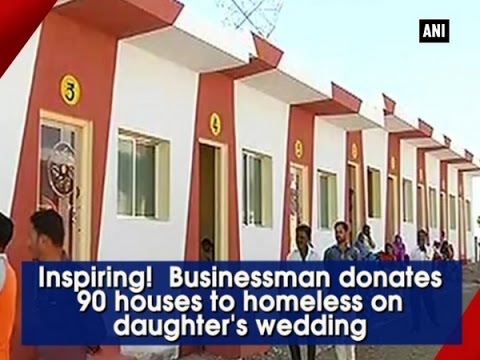 A Indian businessman named Ajay Munot, has donated 90 houses to the homeless instead of spending the more than $97,000 U.S. Dollars as a gift to his daughter Shreya’s wedding celebrating her marriage.

Ajay Munot, is a trader of cloth and wheat, Munot constructed a colony for the homeless people of west India consisting of 90 homes, on 2 acres of land the homes are 12 by 20 sq. Ft with two windows, and two doors small homes but none the less a place to stay sleep and live for these people who once had nothing.

But Mr. Munot didn’t only provide houses for them, he also saw to it personally that these people all got clean filtered drinking water, which many did not have access to before Mr. Munot stepped in to potentially save their lives.

The filtered water system goes into each of their homes.

The only stipulations that were placed by Munot for families to receive these homes were the following they needed to be poor, live in a slum and third they could not have some sort of drug addiction.

Luke Rudkowski was personally over in India and he saw first hand the poverty levels and how local people were coming together during a currency reset to help each other out not panicking but sharing the wealth and resources in an honor and trust system in a good sense of community. India though is known to be a poverty driven country.

In a video of the bride Speaking to ANI,  Shreya said she “was very happy with the decision and considers it a great wedding gift” and that they both agreed that it was for a better cause.

After their wedding, the bride and groom happily handed out the keys to the new homes and chose homeless families who were over joyed to get off the streets and begin living a life.

The formerly homeless people are already said to be benefiting, with one woman reported to have said she is happy now that she and her family do not have to deal with the problems of accessing basic needs such as water and electricity according to The Free Press Journal.

What do you think of her father’s decision? More kind gestures such as this is what’s needed in the world in my own opinion now if we can just convince the billion dollar businessmen over in the U.S. to open up their hearts and their wallets to do the same over here to all the homeless people out there on the streets every time their daughters get married.