Iran, China, and Russia to Send Chilling “Message to the World” in Unprecedented War Games 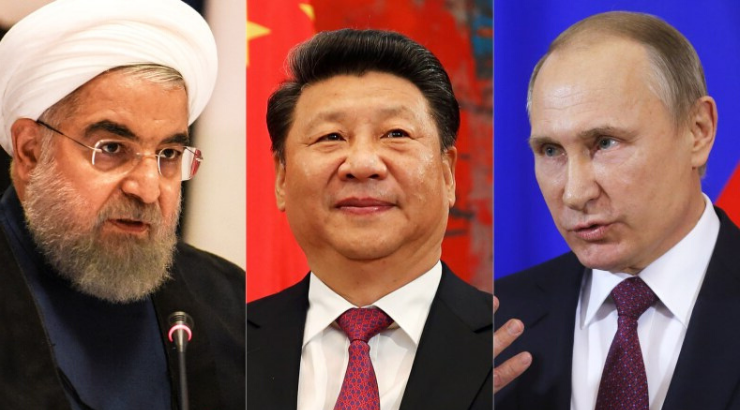 Just as Americans were gearing up for Thanksgiving, on Wednesday Iranian officials announced they will send a “message to the world” by holding unprecedented war games with partner forces Russia in China in the Indian Ocean.

Semi-official Mehr news agency cited Rear Admiral Hossein Khanzadi on Wedneday to reveal the “mass war drills” will held at some point next month or the “near future” in a historic first, and as the three unlikely allies find themselves facing ramped up Washington sanctions and pressure.

He went on to explain such high level cooperation among powerful enemies to the US will send a glaring and unmistakable message to the world: “The joint wargame between Iran, Russia, and China, which will hopefully be conducted next month, carries the same message to the world, that these three countries have reached a meaningful strategic point in their relations, with regard to their shared and non-shared interests, and by non-shared I mean the respect we have for one another’s national interests.”

Adm. Khanzadi described further: “When we talk about joint wargames, we are talking about two or more countries with a high level of relations in various political, economic and social fields, which culminate in cooperation in the military sector, with wargames usually being the highest level of such cooperation.”

“A joint wargame between several countries, whether on land, at sea, or in the air, indicates a remarkable expansion of cooperation among them,” the naval commander said.

This comes after a summer where simmering tensions with the West boiled over into a full blown ‘tanker war’ scenario, as well as the alleged Iranian-ordered drone and missile attack on Saudi Aramco facilities in mid-September which briefly took out the kingdom’s ability to process crude oil.

“The wargame seeks to deliver this message to the world that any kind of security at sea must include the interests of all concerned countries. We do not condone the kind of security that only caters to the benefits of one specific country at a specific time and which disregards the security of others,” Khanzadi said.

“Seas, which are used as a platform for conducting global commerce, cannot be exclusively beneficial to certain powers,” he added, likely in reference to Washington’s latest attempts to establish a joint maritime security force to patrol the Gulf against ‘Iran threats’.

Russia has historically cooperated in naval exercises with Iran on the Caspian Sea in local maneuvers; but an expansive exercise which includes China will set a major precedent.

Currently, a Europe-led maritime mission is gaining traction in the Gulf, led by France and headquartered in Dubai. Iran has expressed that it alone is responsible for safeguarding the vital Strait of Hormuz oil passageway, but has also recognized that a European-led force (involving JCPOA partners) is more acceptable than any American military or naval initiative.