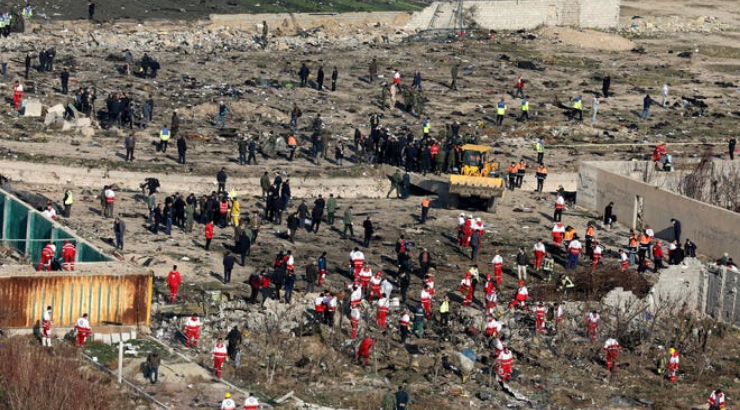 After vehemently denying that a misfiring of its missile defense system essentially shot UIA Flight 752 out of the sky, Tehran has decided that it will allow international investigators access to data from the plane’s ‘black box’ which could help shed some light on what caused the crash, WSJ reports.

Iran’s top transportation ministers initially said that they wouldn’t share the data, citing the escalating tensions with the US and the West as justification. However, an outpouring of criticism from alleged US intelligence sources, along with trained aerospace analysts, have suggested that “a shootdown scenario” most likely caused the deadly crash, has apparently changed their mind. Even President Trump has said that he doubts the Iranians’ explanation.

So Tehran has invited representatives from Boeing, the US, Ukraine (where the plane’s operator, Ukraine International Airlines, is based), France and Canada to join in the probe.

Officials from Iran’s Civil Aviation Organization said Friday during a televised news conference that they would try and analyze the black box data, including the flight data recorder and cockpit voice recorder, in Iran, though experts in Russia, Ukraine, France and Canada are standing by to lend assistance.

“If we can do it ourselves, we will,” Ali Abedzadeh, head of Iran’s Civil Aviation Organization, said during a press conference in Tehran. “If not, we will definitely ask for assistance from other countries.”

CBS News reported that when its crew visited the crash site west of Tehran on Friday, virtually all pieces of the plane had been removed…

CBS crew just visited the #Ukrainian airlines crash site west of Tehran. Nine am local time. Virtually all pieces of the plane were removed yesterday – say locals. Scavengers now picking site clean. No security. Not cordoned off. No sign of any investigators. pic.twitter.com/hhNJyokhjq

…though they later clarified, after speaking with Iranian officials, that the site had been cleared and the pieces moved to a different location.

To clarify – Iran clearing wreckage of #Ukrainian Airlines flight #PS752 from crash site within 48 hours is not against any international rules or protocols. Investigators prefer to see where and how wreckage landed before moving, but it is not essential.

#Iran cleared the wreckage of flight PS752 away from the site within 48 hours – but it has been collected at another location and is being examined by Ukrainian investigators.

If suspicions are accurate, and Flight 752 was really brought down by a short-range missile-defense system, officials would then need to determine whether the firing was an accident or deliberate – though most have suggested that an accident is the most likely scenario.

Iranian officials again denied that Flight 752 was brought down by a missile on Friday after Ukrainian officials told the press that they believed a missile strike or terrorist bombing were two of the four likely scenarios behind the crash that they were exploring.