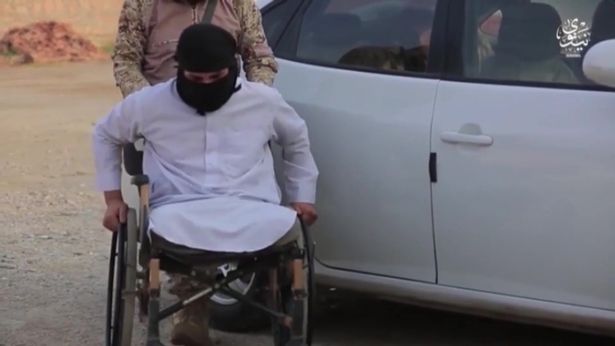 Footage released by a purported ISIS network signed with the terrorist group’s flag shows the soldiers helping a man out of a vehicle and into his wheelchair.

The man, who has no legs, is then loaded with explosives and interviewed, brandishing an assault rifle next to him before being wheeled away to carry out his suicide mission.

It is believed that he carried out a suicide attack in Mosul.

The video then cuts to drone footage and shows a plume of smoke rising just moments after the man detonates his bomb.

Although it appears that the video may be edited, and the explosion may not be legitimate, it’s believed by this writer that this may be ISIS showcasing a new suicide technique for would-be jihadists of the group. ISIS earlier last year encouraged its followers to be creative and discover new forms of attacks. Shortly afterward, the Nice attack ensued using an 18 wheel truck as a human battering ram through a crowd at Bastille day. Since then another attack ensued last month in Berlin where another jihadist used a truck to kill and injure multiple people in the middle of a Christmas market.

ISIS is known for its brutality and sick mindset so much that Qaeda has even called them too extreme.  This is just a prime example of that extremeness – using disabled people in wheelchairs really? That is a whole new level of sick. If ISIS’s goal is to truly disturb the west and everyone else in it it’s working. What a horrible thing to do to a disabled person and one’s own fighters.