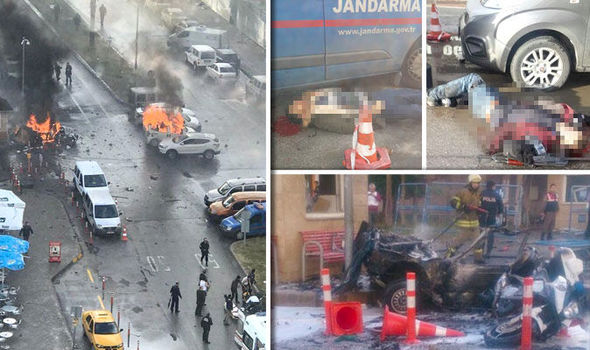 A car bomb has exploded in Turkey killing a police officer and a courthouse employee outside Izmir courthouse in Turkey, Reuters has reported.

According to Reuters, the two suspected attackers have been killed following clashes with police.

Dogan News Agency reports that a manhunt has begun looking for a potential third suspect, citing the state-run Andalou agency.

Hurriyet reports that the explosion was due to a car bomb that exploded out front of the courthouse, causing damage to several vehicles.

The attack is believed to be connected to the PKK or Kurdistan Workers’ Party according to the governor.

Among those injured Police officers are believed to be included, according to Dogan.

The governor of Izmir has confirmed two deaths “one of a police officer and the other of a  courthouse employee,” he added,  that so far five people were injured in the attack, some critically wounded.

He said the “attackers were armed with Kalashnikov rifles and grenades. Initial investigations suggest the outlawed Kurdistan Workers’ Party (PKK) were responsible for the attack,” according to the governor.

A temporary media gag order has been issued on the attack, according to Hurriyet.

The explosion comes less than a week after 39 people were killed when a gunman opened fire at Istanbul’s Reina nightclub on New Year’s Eve.

(THIS IS A DEVELOPING STORY, FURTHER DETAILS WILL BE ADDED WHEN KNOWN.)