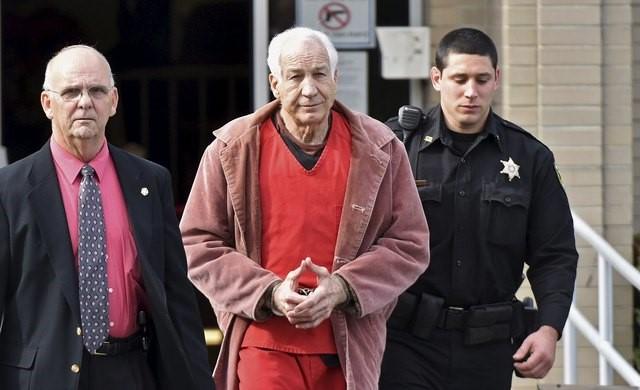 The adopted son of infamous sex offender and former Pennsylvania State University Football Coach Jerry Sandusky has been arrested and charged with sexually assaulting a child.

Jeffrey Sandusky was arraigned on charges Monday afternoon in a Bellefonte, Pennsylvania court.

The investigation began in November after a child claimed to have received text messages from Jeffrey Sandusky, with several allegedly asking for naked photographs.

According to state police, Sandusky was dating the child’s mother at the time. The explicit text messages were shared with the child’s father, who then notified police.

According to the criminal complaint, a second child was also abused dating back to 2013.

An anonymous source told the FBI in 2013 that Gricar had his “knee caps spun and throat slit,” and proceeded to show them where his body was buried.

Gricar was informed about sexual abuse allegations against Penn. State Football Coach Sandusky in 1998, but decided not to press charges.

Former child prostitute Greg Bucceroni also alleged that Sandusky shared the boys with a larger pedophile ring, when he spoke out in 2012:

“(Between) 1977-1980 I was a child prostitute associated with a tri-state (NYC-NJ-PA) pedophile ring. (During the) summer of 1979 I was brought to the State College area by Ed Savitz for the purpose of child prostitution with Jerry Sandusky at a Second Mile fundraiser … Due to time constraints, Sandusky became unavailable and I was introduced to Phil Foglietta by Ed Savitz & Jerry Sandusky. Foglietta was introduced to us as Coach Phil who coached youth football in NYC. Foglietta agreed to pay $200.00 for child sex and followed us back to a Philadelphia hotel, myself (sic)ad another child prostitute then engaged coach Phil in child sex,” Bucceroni said in an email to Poly Prep, the Brooklyn private school  who had a coach Phil Foglietta accused of being involved in the pedoring with Sandusky.

Another unknown man was questioned by the FBI in 2012 about Sandusky’s pedophile ring allegations, Radar Online—the gossip site that originally broke the scandal—reported.

Sandusky senior was sentenced to 30 to 60 years in prison following the testimony of 10 other boys.

“I’m not going to sentence you to centuries,” Judge John Cleland said at the sentencing hearing. “It makes no sense for a 68-year-old man. This sentence will put you in prison for the rest of your life.”

Stay tuned for more details on the case, and the pending charges against Jeffrey Sandusky.