JFK’s Revenge: WikiLeaks Referenced JFK In Its Passphrase, Was He Killed By The CIA? 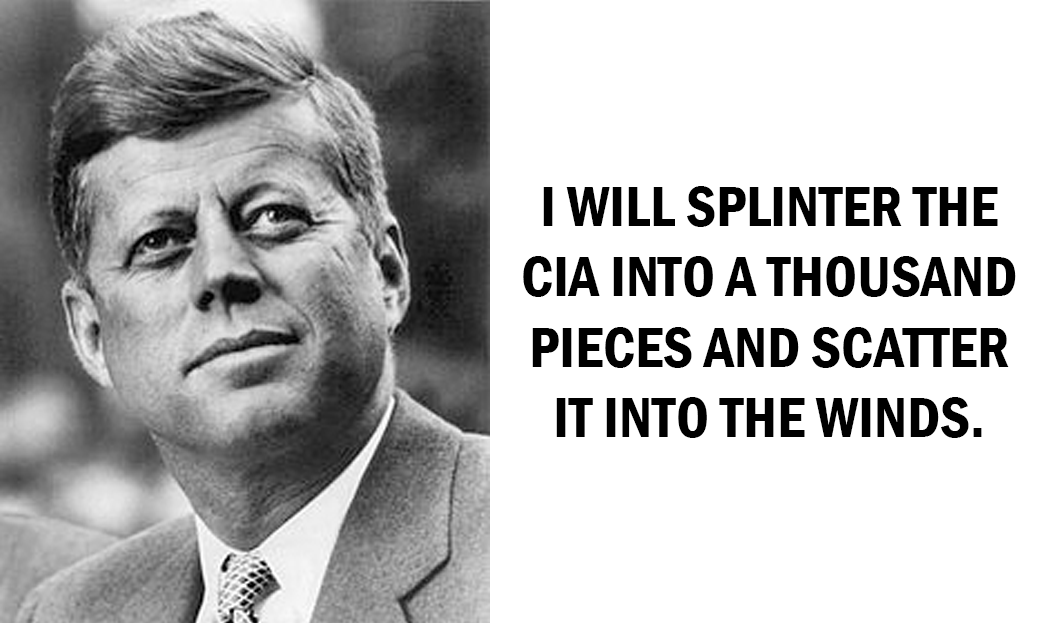 WikiLeaks released Vault 7, a slew of CIA files on surveillance and hacking, encrypted with the password “SplinterItIntoAThousandPiecesAndScatterItIntoTheWinds”, a phrase that President John F. Kenndy used a month prior to his assassination. Kennedy hated the CIA.

Speaking in a History Channel documentary years ago, Samuel Halpern, author of “The Assassination of JFK,” claimed that the threat against JFK’s life stemmed from Kennedy’s frustration with the CIA, which he believed was becoming a “state within a state.” Halpern was involved in the investigation of the assassination of John F. Kennedy.

The video below focuses on Kennedy’s relationship with Cuba prior to his assassination, allegedly by Lee Harvey Oswald, despite the fact that the three consecutive shots can’t be recreated.

It also discusses Operation Northwoods, a proposed false flag operation against Fidel Castro, planned by the U.S. joint chiefs of staff and CIA.

According to ABC News, “the plans reportedly included the possible assassination of Cuban émigrés, sinking boats of Cuban refugees on the high seas, hijacking planes, blowing up a U.S. ship, and even orchestrating violent terrorism in U.S. cities.” All to manipulate the American people into supporting a war against Cuba.

Kennedy also criticized the CIA’s original Bay Of Pigs (Operation Pluto/Zapata) and ultimately caused it to fail because of his decision to cut the operation’s military force down for the mission.

The CIA‘s “Bay of Pigs” plan to overthrow Cuba’s communist government had been in the works before John F. Kennedy moved into the White House. After weeks of discussion with his national security advisors, President Dwight D. Eisenhower approved the CIA’s plan to oust Castro. The operation suggested opening a radio station on Swan Island in the Caribbean to broadcast anti-Castro programming to Cuba, supplying anti-Castro resistance groups within Cuba and training a paramilitary force for the eventual infiltration of the country. Eisenhower signed the deal stating that he knew of “no better plan” to oust the Cuban Communists and eliminate Castro.

While he was still running for the presidency, Kennedy learned about the plan on July 23 1960, when CIA Director Allen Dulles visited Kennedy at his family’s home at Hyannisport on Cape Cod to brief the then candidate about the anti-Castro operation. But a few weeks later the plan changed. The CIA abandoned the idea of infiltrating the island in favor of an invasion, complete with air support, to drive Castro from power. Eisenhower approved a budget of $13 million for the operation but stipulated that no U.S. military personnel could be part of the combat force.

Somehow, the plan leaked to the press and on January 10, 1961, the New York Times ran a front-page story under the headline, “U.S. HELPS TRAIN AN ANTI-CASTRO FORCE AT SECRET GUATEMALAN BASE.”

On March 11, 1961, Kennedy invited CIA Director Allen Dulles and Richard Bissell, the CIA’s chief of operations to the White House. JFK wanted to know, in detail, the plans for the invasion of Cuba. Dulles and Bissell explained that after U.S. aircraft had run a bombing mission over the Bay of Pigs area, Cubans recruited from exile, living in Miami would take the beach by storm. The CIA expected that the invasion would inspire anti-Castro Cubans to rise up and overthrow the dictator.

Kennedy didn’t like the idea of beginning the attack with air strikes. “Too spectacular,” he said. “It sounds like D-Day. You have to reduce the noise level of this thing.”

Many of the approximately 1,500 CIA-trained Cuban exiles believed that they were the first wave of Cuban freedom fighters who would liberate their homeland from Castro. They were convinced that as they stormed ashore, they would be supported overhead by the U.S. Air Force, and as they advanced into Cuba, the U.S. Marines would be right behind them. The exiles were absurdly mistaken they held the beach for three days and then ran out of ammunition and over 1,000 of the resistance troops known as Brigade 2506 were captured.

On April 14, 1961, just three days before the invasion, Kennedy called Bissell to ask how many planes he would use in the operation. Bissell told the president the CIA planned to use all sixteen of their B-26s. “Well, I don’t want it on that scale,” Kennedy replied. “I want it minimal.” Kennedy cut the planes used down to eight and the operation ultimately failed.

CIA Deputy Director Charles Cabell was fired by Kennedy. Cabell’s brother was the Mayor of Dallas, Texas at the time of his assassination (more on that later.)

CIA director Allen Dulles was also fired and replaced by John A. McCone after the second attempt was proposed to overthrow the Cuban government under Operation Northwoods.

As David Talbot wrote in his book The Devil’s Chessboard: Allen Dulles, the CIA, and the Rise of America’s Secret Government and TheDailybeast reported, did CIA Director Allen Dulles order a hit on JFK?

The next fact surrounding JFK’s assassination is that George H.W. Bush Sr. was present during the day of JFK’s assassination, but he denies that he was there despite photographic evidence. There is also an FBI memo and another document that mentions an agent, George W. Bush, receiving intel information on anti-Castro Cubans but Bush denies again that the person mentioned in the report was him. One FBI memo fails to provide an answer to where George Bush actually was. 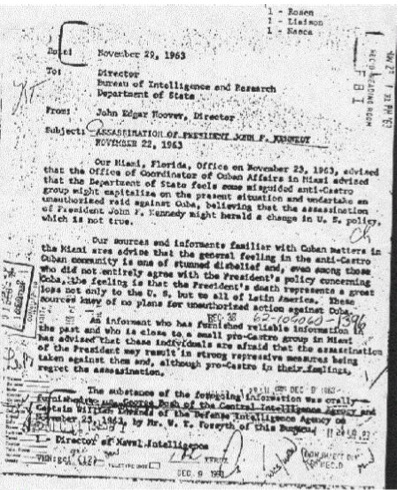 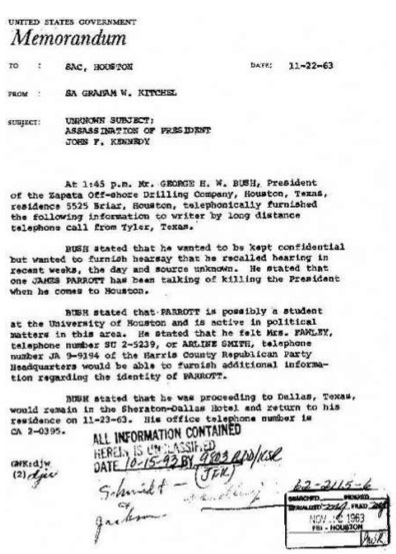 George Bush Sr.’s oil company was called Zapata Offshore co. Dulles, Bush and the mayor of Dallas Earle Cabell all knew each other. Zapata sound familiar? It was the original name for the Bay Of Pigs operation. Was Bush involved in the Bay Of Pigs invasion?

In 1981, all Securities and Exchange Commission filings for Zapata Off-Shore between 1960 and 1966 were destroyed. In other words, the year Bush became vice president, important records detailing his years at his drilling company disappeared. In 1969, Zapata bought the United Fruit Company of Boston, another company with strong CIA connections. Bush later became CIA director in 1976.

Dulles also headed the Warren Commission investigation into Kennedy’s assassination. Despite being fired by Kennedy, Dulles was appointed by President Lyndon B. Johnson.

JFK’s son John F. Kennedy, Jr founded a magazine oddly titled “George” which many speculate is insinuating for people to look closer at his father’s death and that Kenendy Jr. was trying to tell the world that George H.W. Bush was involved in the murder. 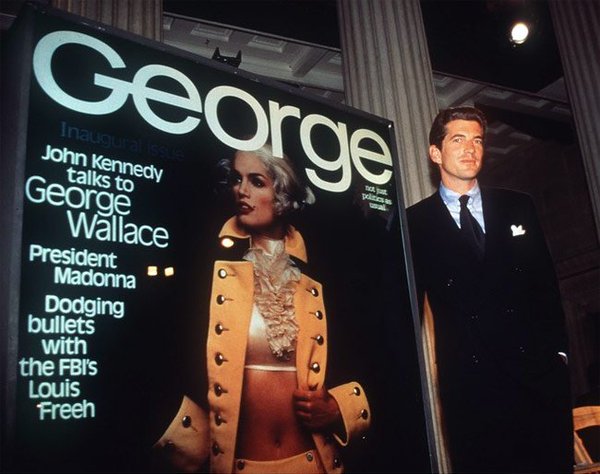 Bush even laughed at the assassination of JFK at President Gerald Ford’s funeral. What’s so funny George?

An additional anomaly that suggests Kennedy was murdered by a hit squad and not a lone gunman is that a nurse, Phyllis Hall, claims that Kennedy was also shot with a “mystery” bullet between his ear and shoulder that was covered up and she never heard about the incident again.

“I could see a bullet lodged between his ear and his shoulder,” she said. “It was pointed at its tip and showed no signs of damage. There was no blunting of the bullet or scarring around the shell from where it had been fired.”

“I’d had a great deal of experience working with gunshot wounds, but I had never seen anything like this before. It was about one-and-a-half inches long – nothing like the bullets that were later produced.”

Then there is CIA agent E. Howard Hunt who confessed to being a part of a hit squad that killed Kennedy on his deathbed.

Hunt names CIA operatives Cord Meyer (whose wife was apparently having an affair with JFK), David Morales and William Harvey as being involved as gunmen. Hunt also said he hired Frank Sturgis and Bernard Barker.

Now back to Oswald was he just a patsy? There is a mysterious attempted call that has been ignored by the mainstream media. “The Raleigh Call”, happened just hours before his death. Lee Harvey Oswald tried to call John Hurt, a former military counterintelligence agent in Raleigh, North Carolina, from the Dallas jail on the evening of Nov. 23, 1963. “For years, this significant information was ignored by assassination investigators and concealed from the public,” Dr. Grover Proctor said.

Oswald himself had significant military ties and intelligence serving in the Marines — where his nickname was “Osvaldovich”. He even allegedly had a CIA 201 employee file.

“We don’t know what happened, but we do know Oswald had intelligence connections. Everywhere you look with him, there are the fingerprints of intelligence,” Senator Richard Schweiker said.

Further, a document titled the “Central Intelligence Report On The Assassination Of John Kennedy” allegedly sent from then-CIA director McCone to then-Chief U.S. Secret Service James Rowley mentions Oswald’s ties to the Office Of Naval Intelligence. Although, there are some who are calling the document a forgery prior information proves Oswald’s connection to intelligence services. There is also another very similar (but very real) memorandum which shares some hallmarks with the “McCone-Rowley” memo titled “Warren Commission Exhibit 1026; Secret Service memorandum, dated March 19, 1964, re “Secret Service Report on the Assassination of President.”

A former FBI Agent Don Adams even says that “thousands of national archives prove that John F. Kennedy wasn’t assassinated by Oswald.” Adding that the “the Warren Commission was a fraud.”

Another theory behind JFK’s assassination is that it was a Cuban government hit job as payback for the failed Bay Of Pigs invasion a few years prior but believing that theory would require ignoring all other evidence testimony and documents.

Whatever the truth may be behind the killing of potentially the greatest President the U.S. has ever had, it will all come out soon in October 2017 when the CIA is mandated to disclose the redacted pages behind JFK’s death.

“A special team of seven archivists and technicians with top-secret security clearances has been set up at the National Archives and Records Administration to process all or portions of 40,000 documents that constitute the final collection of known federal documents that might shed light on the events surrounding JFK’s murder, files that, according to law, must be made public by October 2017”

You can find out more about JFK’s death and the strange circumstances surrounding it by visiting JFK2017. If it was the deep state CIA that murdered our 35th U.S. President, it’s time to “splinter the CIA into a thousand pieces and scatter it into the winds” and finish what JFK wanted.