Journalist Goes Missing After Reporting About Coronavirus From Wuhan 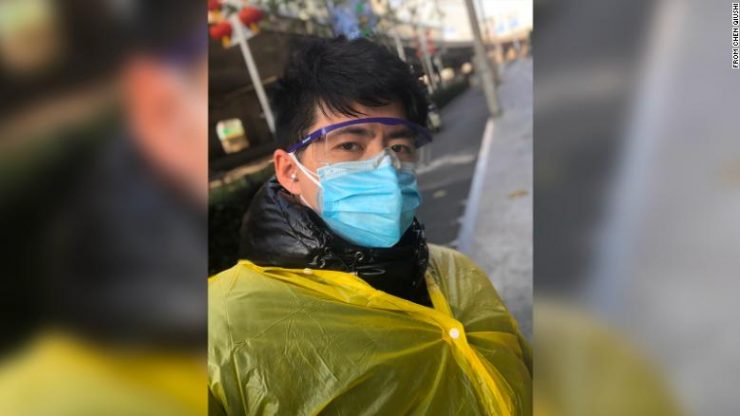 The recent death of Wuhan doctor turned whistleblower Li Wenliang sparked outrage across China and the rest of the world. Activists and independent journalists trapped in the quarantine zones say that Li could have prevented the current outbreak if the government had listened to him instead of attempting to cover it up.

In the days after his death, Chinese social media platforms were filled will demands for freedom of speech as well as suggestions that the government cover-up allowed the illness to spread. Evidence of crackdowns have also spread online, with footage of Chinese police in medical gear forcibly removing people from their homes appearing on social media.

In the chaos of the past week, lawyer and citizen journalist Chen Qiushi, who was doing very dangerous reporting from the quarantine zone in Wuhan, has gone missing, and many of his loved ones say that he was captured by the Chinese government. Chen was active on social media and was keeping in regular contact with his friends until Thursday when he went silent and could no longer be reached.

After he disappeared a close friend posted a video to Twitter of Chen’s mother pleading for help to find her son.

Xu Xiaodong, a well-known martial artist and friend of Chen, later posted a video saying that police admitted to detaining Chen in a quarantine, according to CNN.

“In the last few hours the Qingdao public security officers and state security officers … notified Qiushi’s parents that Qiushi has already been detained in the name of quarantine. Qiushi’s mother immediately asked them where and when he was taken away, they declined to say,” said Xu.

Xu also said that Chen was in good health the last time that anyone had heard from him.

However, when CNN contacted the Wuhan and Qingdao city police, both insisted that they had no information about Chen.

Chen has a long history of activism and has had previous penalties from Chinese authorities for his efforts in independent journalism. During last year’s protests in Hong Kong, Chen was reporting to 740,000 followers on Weibo about the demonstrations, often contradicting the Chinese government’s version of events.

Following the protests, Chen’s social media accounts were deleted by authorities and all of his footage was wiped from the internet. Chen was also regularly called in for questioning and harassed by police, but continued to persist in his activism and journalism on Twitter and YouTube, both of which are blocked in China unless accessed using a VPN/

During the Chinese Lunar New Year, when many people were fleeing the city as the quarantine was being imposed, Chen rushed into the city of Wuhan to report on the situation.

In his first video from Wuhan, Chen explained:

“I’ve said before that I’m a citizen journalist. What kind of journalist am I if I don’t rush to the front line when there is a disaster? I will use my camera to witness and document what is really happening under Wuhan’s efforts to contain the outbreak. And I’m willing to help spread the voice of Wuhan people to the outside world. While I’m here, I promise I won’t start or spread rumors. I won’t create fear or panic, nor would I cover up the truth.”

Chen was among numerous citizen journalists contradicting the official narrative that was coming from Bejing while reporting independently from Wuhan. Chen’s reporting showed that the virus appeared to be much worse than was being suggested by official sources. Chen showed the world the overcrowded hospitals and heavy-handed tactics being used by police.

“I’m scared, I have the virus in front of me and behind me China’s law enforcement,” Chen said in one of his last videos that was recorded in a hotel room on January 30. In the same video he revealed that his parents back home in Qingdao were already being harassed by authorities.

Another citizen journalist, Fang Bin, was also detained over his reporting from Wuhan. According to the LA Times, Fang was visited by police in hazmat suits in the middle of the night and taken into custody after he showed videos of full body bags strewn about a hospital and piled up in an ambulance outside.

The police reportedly asked him, “You went to such a dangerous place, couldn’t you have been infected? What if your sickness spreads to others?”

Fang Bin asked that the police come back with a warrant, but instead they stormed into his house, seized all of his electronics, and took him to a police station where he was accused of rumormongering and accepting bribes from foreign entities to spread misinformation.

Fang was later released and published another impassioned video online where he called for a full-blown revolution.

Virtually imprisoned at home, #FangBin, who shot that viral "8 bodies in 5 minutes" video of #Wuhan hospital, says the only reason the police hasn't broken in is the world's attention. He cannot stop speaking out. "If they don't come to me, they'll turn to you." #Coronavirus pic.twitter.com/oa95mDNgXF

Fang, Chen, and Li are among 300 Chinese citizens who have been detained, fined, or otherwise punished by authorities for “spreading rumors” about the outbreak, according to Chinese Human Rights Defenders.