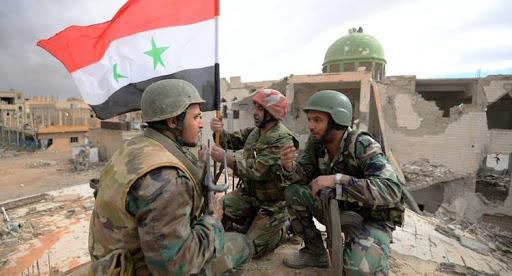 This week has already witnessed significant direct fighting between the Syrian and Turkish armies — after on Monday and Tuesday over a dozen more Turkish troops were killed following a bloody weekend of possibly scores killed on each side and now both are vowing to annihilate the other’s forces if under attack. Turkey’s President Erdogan had announced a successful retaliatory strike against “enemy” Syrian soldiers which he claimed left over 100 dead.

The Syrian Army vowed that it would continue to respond against “Turkish occupation forces” attacks, while Erdogan threatened the Syrian government will pay a “very heavy price” amid attacks against Turkish soldiers in Idlib.

“The [Syrian] regime, especially in Idlib, got what they deserved. But this is not enough, we will continue. Because if they keep attacking our troops, they will pay a very heavy price. I will publicly announce these steps tomorrow,” Erdogan announced Tuesday. This also the day a Syrian helicopter was shot down presumably by al-Qaeda linked Hayat Tahrir al-Sham fighters armed with a MANPAD.

And on Wednesday, the Turkish president took his rhetoric to a new level. After confirming that at least 14 Turkish soldiers have been killed in recent clashes in Idlib against the Syrian Army, he said the military is ready to attack Syrian government forces “anywhere” should Turkish troops come under attack, marking an intent to escalate beyond the currently confined Idlib region fighting.

“If there is the smallest injury to our soldiers on the observation posts or other places, I am declaring from here that we will hit the regime forces everywhere from today, regardless of Idlib’s borders or the lines of the Sochi agreement,” Erdogan said, in reference to the 2018 ceasefire negotiations backed by Russia.

“We will do this by any means necessary, by air or ground, without hesitating, without allowing for any stalling,” he added, signaling readiness to shoot down Syrian aircraft.

This month Turkey has sent some 5,000 troops and convoys of armored vehicles, including tanks, across the border to bolster 12 observation posts in Idlib as part of the Sochi agreement. The supposed ‘de-escalation’ zone has been anything but, however, as Syria has witnessed terrorists attacks in Aleppo originate from jihadist groups in neighboring Idlib, which Damascus says Erdogan has provided military cover for.

Crucially, in a rare moment after a couple of years of rapidly deteriorating relations with Washington, Ankara has received full US support amid its standoff with the Syrian Army over Idlib. Secretary of State Mike Pompeo said on Twitter of the latest Turkish troop deaths: “The ongoing assaults by the Assad regime and Russia must stop. I’ve sent Jim Jeffrey to Ankara to coordinate steps to respond to this destabilizing attack. We stand by our NATO Ally Turkey.”

He announced the US readiness to give Turkey support against the Syrian regime attacks on Idlib.

The US Special Envoy to the region James Jeffrey didn’t merely touch down in Turkey declaring support to Erdogan, but he declared support while speaking Turkish — clear symbolism that Washington is ready to go ‘all in’ backing up Turkey as it clashes with pro-Assad forces.

Given the recent past history of allies Syria and Russia almost directly clashing with the US and NATO over the fate of Idlib, and with the potential for new “Assad chemical attack” claims to be unleashed as leverage by the al-Qaeda militants on the ground, the final battle for Idlib could be the spark that renews a major proxy war over Syria once again.