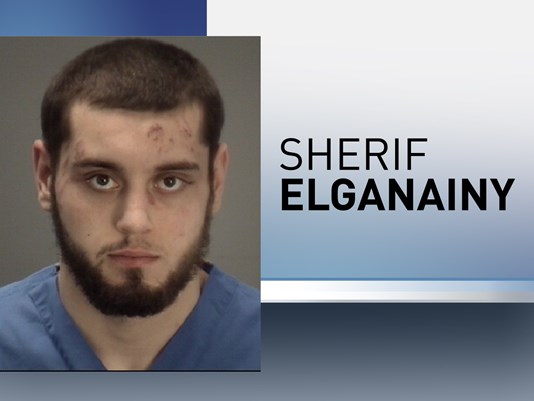 A Florida man who was violently arrested after declaring to his parents that he is a member of ISIS, and was found to have been making “chemical devices,” is not a terrorist — according to law enforcement.

Pasco  Sheriff Chris Nocco has asserted that despite 21-year-old Sherif Elganainy telling his parents that he is part of ISIS, and him trying to steal an officer’s gun during his arrest — he is not actually a terrorist. There is also the fact that “chemical devices” were found in his home, and he was searching for information on how to make more. Absolutely not terrorist behavior, according to law enforcement.

“He’s not a terrorist, as we have told you all day long on air and online — that’s the word from the Pasco Sheriff’s Office about the man they arrested last night,” local station WTSP said at the beginning of their broadcast.

Police were called by Elganainy’s parents, who are Muslim, on Wednesday morning, as they smelled a strange chemical odor in their home.

“The mother smells some chemicals, the father starts ventilating the house, they get into a confrontation with their son, Sherif. He then pushes the father and the mother,” Nocco explained during a press conference.

When police arrived, Elganainy was holding a large knife, and attempted to grab a deputy’s gun. Two deputies were injured during the confrontation — one with a broken hand, and another who suffered a blow to the head. A Taser was also deployed at some point during the incident, which struck the suspect as well as a deputy.

“He’s pulling on my gun,” a deputy is heard saying in dramatic body camera footage.

Elganainy’s father was taken to the hospital for injuries, while police searched the family’s home. Things escalated however, as the mother told law enforcement that he has told her that he is a terrorist.

“Mom made statements to detectives that when he gets mad he says things to her like I’m a terrorist or part of ISIS,” Nocco continued.

At this point, multiple federal agencies were called to the scene, as well as a bomb squad to investigate the chemical odor.

“The chemicals that we found are not precursors that would be used for narcotics. There is nothing that we found at this point that would make us believe that he is associated with a cell or anything with that nature,” Nocco said.

While the Sheriff denies that Elganainy is a terrorist, he stated that he is “extremely dangerous.”

“This individual is extremely dangerous. There were chemicals out there he was researching, further how to make other chemical devices he had made statements about these things,” Nocco said. “I don’t want to say anything to damage the case. I want to put this person away as long as we can because it’s clear this individual should not be out on the streets.”

Currently, the not-terrorist is facing multiple charges of domestic battery, aggravated battery on law enforcement and resisting arrest with violence. The Sheriff’s Office has not ruled out adding on additional charges.