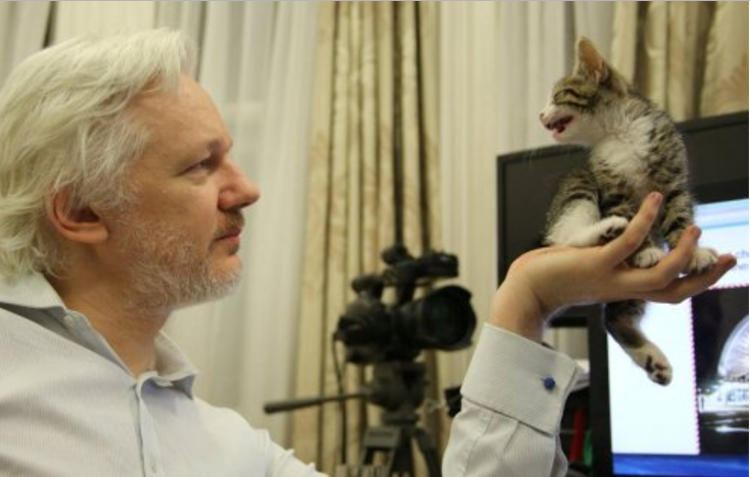 LONDON (WeAreChange) —  The controversial co-founder and editor in chief of WikiLeaks, Julian Assange, confirmed Friday that his internet access at the Ecuadorian Embassy in London has been finally restored after it was severed in October.

Assange revealed new details on his current situation as well as the state of WikiLeaks in an exclusive sit-down interview with Repubblica.it.

In reply to the question “Is the internet still cut of?” Assange confirmed, “the internet has been returned.”

Assange’s internet was “intentionally severed” on October 17 by the Ecuadorian government amid the publication of thousands of emails from Clinton Campaign Chairman John Podesta.

Wikileaks tweeted this at the time confirming internet access was cut.

The Ecuadorian government confirmed the following day that it had cut Assange’s internet over fears it would be seen as aiding WikiLeaks’ influence on the US election.

Ecuador admits it severed Assange’s Internet over WikiLeaks influence on the election. pic.twitter.com/5WmYtbSG85

Assange also confirmed the “anti-secrecy” organisation would survive because of its contingencies in place even if he were to be charged and extradited to Sweden and then to the United States.

“Yes, we have contingency plans that you have seen in action when my Internet was cut off and while I was in prison before. An organisation like WikiLeaks cannot be structured such that a single person can be a point of failure in the organisation, it makes him or her a target.”

Assange in reply to the question, “You’ve declared on more than one occasion that what you really miss after 6 years of arrest and confinement is your family. Your children gave you a present to make you to feel less alone: a kitten. Have you ever reconsidered your choices?” said:

“Yes, of course. Fortunately I’m too busy to think about these things all the time. I know that my family and my children are proud of me, that they benefit in some ways from having a father who knows some parts of the world and has become very good in a fight, but in other ways they suffer”.

During the interview Assange also commented on Hillary Clinton’s presidential loss and his views on Trump’s burgeoning administration.

“Hillary Clinton’s election would have been a consolidation of power in the existing ruling class of the United States,” Assange said. “Donald Trump is not a DC insider, he is part of the wealthy ruling elite of the United States, and he is gathering around him a spectrum of other rich people and several idiosyncratic personalities.”

“They do not by themselves form an existing structure, so it is a weak structure which is displacing and destabilizing the pre-existing central power network within DC. It is a new patronage structure which will evolve rapidly, but at the moment its looseness means there are opportunities for change in the United States: change for the worse and change for the better.”

Looking back on 10 years of publishing, Assange reminisced on WikiLeaks’ unique ability to shed light on the establishment’s “illusion of power.”

“Power is mostly the illusion of power. The Pentagon demanded we destroy our publications. We kept publishing,” Assange said. “Clinton denounced us and said we were an attack on the entire ‘international community.’ We kept publishing.”

“I was put in prison and under house arrest. We kept publishing. We went head to head with the NSA getting Edward Snowden out of Hong Kong, we won and got him asylum. Clinton tried to destroy us and was herself destroyed. Elephants, it seems, can be brought down with string. Perhaps there are no elephants”.

As many would be aware, Assange has lived and worked in Ecuador’s London embassy since June 2012, having been granted asylum there after a British court ordered him extradited to Sweden to face questioning in an ongoing sexual molestation case involving two female WikiLeaks supporters.

Finally after years of judicial paralysis, Swedish prosecutors travelled to London in November to question him in relation to the allegations. In a matter of just a few weeks, they will be deciding whether to charge or absolve him once and for all. Next February, Ecuador will be holding political elections. If Julian Assange loses asylum, the question is: “will he be extradited to Sweden and then to the US?”