Lead Poisoning In ‘Dozens Of California Communities’ Even Worse Than Flint, Michigan 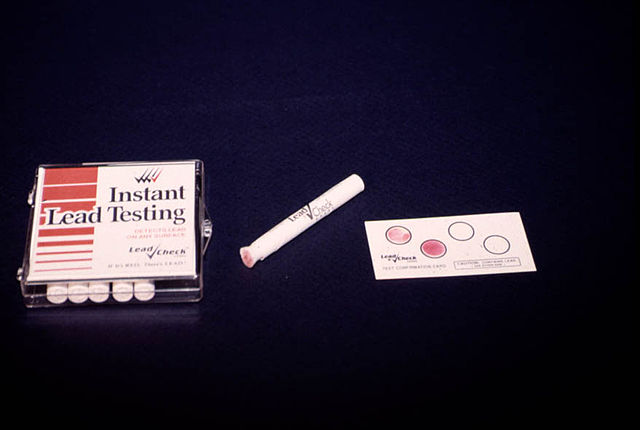 California, a state infamous for its environmental protections, including a $65 billion tunnel project being pushed by Governor Jerry Brown so as not to disrupt the habitat of a tiny, non-native fish species, may be facing a lead poisoning crisis more severe than Flint, Michigan.

In fact, in Fresno’s downtown 93701 zip code, nearly 14% of children tested showed lead levels at or above 5 micrograms per deciliter of blood, the Centers for Disease Control and Prevention’s current threshold for an elevated reading.  As the CDC noted, no level of lead exposure is safe, but children who test that high warrant an immediate public health response.

In all, per the map below, Reuters found at least 29 California neighborhoods where children had elevated lead tests at rates at least as high as in Flint.  “It’s a widespread problem and we have to get a better idea of where the sources of exposure are,” said California Assembly member Bill Quirk, who chairs the state legislature’s Committee on Environmental Safety and Toxic Materials. 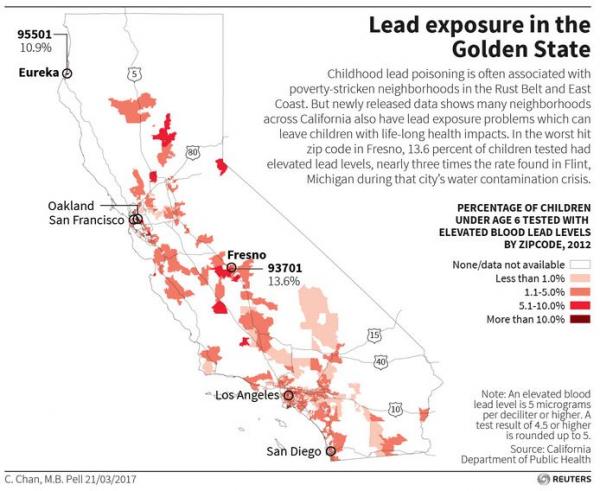 And while elevated lead levels in children was found to be a fairly widespread issue across California, the poorer regions of the Central Valley where the majority of California’s crops are grown were found to be particularly at risk.

In all, Fresno County had nine zip code areas where high lead levels among children tested were at least as common as in Flint. The Reuters article in December documented nearly 3,000 locales nationwide with poisoning rates double those found in the Michigan city along the Flint River.

The city of Fresno battles high poverty rates and problems with substandard housing, both risk factors for lead exposure. Some locals are also concerned with drinking water, after unsafe levels of lead were detected in at least 120 Fresno homes last year.

Still, she expressed surprise at the area’s high rate. “We haven’t looked at it that way compared to Flint,” Berber said.

Of course, California’s Public Health Department attempted to downplay the results saying that comparisons between the state’s blood lead testing results and those from other states aren’t warranted. It said California tests children deemed most at risk for lead exposure, such as those enrolled in Medicaid or living in older housing.  “Testing of at-risk children, and not all children, skews California results to higher percentage of children tested showing lead exposure,” the state said.

But, as Reuters points out, testing that targets at-risk children is common across much of the country.

Blood tests can’t determine the cause of a child’s exposure, but potential sources include crumbling old paint, contaminated soil, tainted drinking water or other lead hazards. 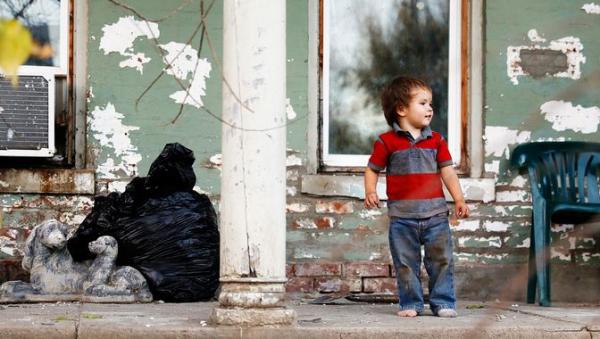 Meanwhile, elevated exposure levels were also found to be a problem in larger neighborhoods surrounding San Francisco and Los Angeles as well.

Lead exposure is common in other East Bay areas, including large parts of Oakland, and nearby Emeryville and Fremont, the new data shows.

In January, Oakland city council members introduced a resolution that would require property owners to obtain lead inspections and safety certifications before renting or selling houses and apartments built before 1978, when lead paint was banned.

In the Los Angeles area, the prevalence of high blood lead tests reached 5 percent or above in at least four zip codes during 2012.

Perhaps it’s time to divert some of those funds allocated to protect endangered fish and bees to actually help the taxpayers of your state, Governor Brown.