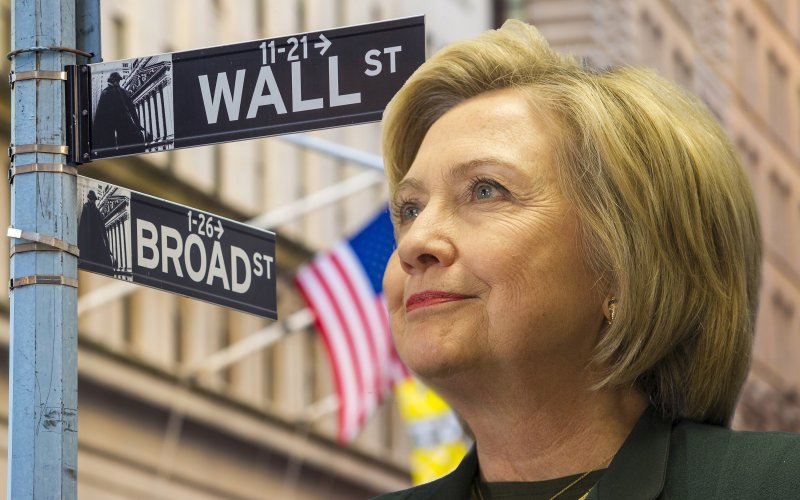 (STOP IMPERIALISM) Eric Draitser — The release by Wikileaks of a trove of emails from high-ranking Democratic Party officials has confirmed what many Americans – both progressive and conservative – have suspected throughout this election cycle: that the Democratic National Committee (DNC) actively conspired against Bernie Sanders in an attempt to ensure the nomination for Hillary Clinton.

But it wasn’t simply party apparatchiks like the disgraced Debbie Wasserman-Schultz, the recently resigned Chair of the DNC and close ally of Clinton, but also their trusted cronies in the corporate media who actively collaborated with DNC officials to ensure that nothing too critical of Hillary would make it into the Mighty Wurlitzer of contemptibly ‘respectable’ journalism.  Indeed, what the Wikileaks revelations expose to the world is the fact that there’s nothing democratic about the Democratic Party, or America’s alleged democracy in general.

More specifically however, the question that really must be asked is: why Hillary Clinton?  What is it about this woman that unites nearly the entirety of the political, financial, socio-cultural, and military establishment?  Is it really just hatred of Donald Trump?  Or is there something more insidious, something that makes Hillary the irresistible flame of belligerence and exceptionalism to which the corporate-imperialist moths are slavishly attracted?

For months the sentinels of the liberal media fortress derided all allegations of a DNC conspiracy against Bernie Sanders and the millions of Americans who #FeelTheBern, caricaturing these accusations as no different from the Illuminati-Freemason-Rothschild-Lizard People.  Articles like Bernie Sanders Fans’ DNC ‘Collusion’ Conspiracy Theory is Embarrassing Garbage and Can we please stop with the Bernie Sanders conspiracy theories? were staples of the campaign once it became clear that the Berners were a real political force, and that the Sanders campaign could actually pose a threat to the establishment’s preferred proxy, Hillary Clinton.

And with each new article the level of condescension and derision seemed to increase to the point where Sanders’ supporters had been transformed into the embarrassingly clichéd tinfoil-hat wearers of Alex Jones land.  But here we are, just a few months later, and Hillary Clinton has knelt for her coronation as Queen of the imperial castle.  And in the midst of the insufferable Hollywood endorsements, the amnesiac revisionism, and the identitarian phantasmagoria, something amazing happened on the internet: the conspiracy theories were proven true.

Indeed, the Wikileaks emails show direct interventions against Bernie by the DNC.  For instance, in late May, just three weeks before the all-important California primary, a DNC staffer emailed DNC Communications Director, Luis Miranda, pitching him a story about Bernie’s campaign being “a mess.”  Specifically, the staffer wrote, “Wondering if there’s a good Bernie narrative for a story, which is that Bernie never ever had his act together, that his campaign was a mess…It’s not a DNC conspiracy, it’s because they never had their act together.”

What is particularly damning about the email is not that Bernie’s campaign was disorganized (entirely plausible), but rather that DNC staffers and communications director were attempting to manufacture and propagate news stories with that narrative, rather than acting as the impartial party functionaries that they shrilly proclaim themselves to be.  In fact, corporate media outlets did indeed pick up parts of that narrative in the days and weeks leading up to the California primary, specifically the fact that Bernie’s campaign was poorly organized in terms of delegate education and other issues.

Even more egregious is the email from Communications Director Luis Miranda to a number of high-ranking DNC officials, including Wasserman-Schultz, in which he notes that the DNC was able to suppress key information from this New York Times article.  Miranda was pleased that he was “able to keep him from including more on the JVF [Joint Victory Fund], it has a mention in there, but between us and a conversation he had with Marc Elias he finally backed off from focusing too much on that.”

This information is quite damning as it’s clear that Miranda, the spokesman for the DNC, deliberately attempted to shield Clinton from media criticism over the highly dubious “joint fundraising venture” the Joint Victory Fund, which is essentially a Hillary-DNC fundraising machine.  While the JVF gets a passing mention in the article, there is no substantive examination of it, nor is there any context or comparison to the Bernie Sanders campaign whose fundraising was almost entirely based on small, individual contributions.  In contrast, JVF included on its list of donors the Pritzker Group, Saban Capital Group, and other major players in finance capital and industry.  Perhaps this information might have been valuable to the American public trying to decide whether to support Bernie or Hillary.

Or how about the Politico reporter who agreed to allow the DNC to review his article about Clinton’s fundraising before it was published?  Does this strike you as real journalism?  In an April 30, 2016 email, National Press Secretary and Deputy Communications Director Mark Paustenbach wrote to his boss Luis Miranda noting that Politico reporter Kenneth Vogel “gave me his story ahead of time/before it goes to his editors…Let me know if you see anything that’s missing and I’ll push back.”

In a sadly predictable, and grossly unethical, move, the DNC seems to have worked out deals with major media outlets that allowed them to censor corporate media stories about the Clinton campaign, or at the very least to slant them so as to make Clinton look like something less than the Voldemort of Wall Street and capital.

But it goes much further, and indeed gets even more unethical, than just collusion between corporate media and the DNC.  The emails also reveal attempts to smear Sanders with quite literally any information that might damage him in key primary states.  For instance, this email exchange between top DNC officials shows that they intended to “get someone to ask his belief. Does he believe in a God. [sic] He had skated on saying he has a Jewish heritage. I think I read he is an atheist. This could make several points difference with my peeps. My Southern Baptist peeps would draw a big difference between a Jew and an atheist.”  Clearly, in Kentucky and West Virginia, the DNC wanted to use Sanders’s religious beliefs, or lack thereof, against him.  Such tactics are, to put it bluntly, reprehensible.

And of course we could go on and on with dozens of other emails demonstrating the level of collusion within the DNC, and with its media partners, to effectively undermine the Sanders campaign while propping up Clinton.  I guess those arrogant pundits who derisively referred to the “embarrassing conspiracy theories” have some ‘splaining to do.

Why, Exactly, Is Everyone #WithHer?

For veterans of US politics, it should be relatively obvious why Hillary Clinton has been the clear darling of the establishment from the beginning of the race.  And, considering the Democratic Party is a wholly owned subsidiary of Wall Street and the financial elites in the US, it almost goes without saying why the DNC would carry water for the Clinton campaign.  Her record really speaks for itself.

Hillary Clinton is an unabashed warmonger, a woman who has demonstrated time and again her willingness to bomb, invade, and destroy nations all over the globe.  From championing her husband’s criminal bombing of Serbia, to supporting George W. Bush’s invasion of Iraq, to being the principal cheerleader for bombing and destroying Libya and Syria, Hillary’s devotion to the military-industrial complex and the mentality of the Cold War is beyond dispute.

While running for Senate in 2000, Clinton explicated her foreign policy outlook when, according the New York Times, “She cited American involvement in Bosnia and Kosovo as examples of foreign engagements she favored on moral and strategic grounds.” And, according to Hillary biographer Gail Sheehy, Clinton proudly proclaimed “I urged [Bill Clinton] to bomb [Serbia].”  One could be forgiven for thinking these are the smug, egomaniacal claims of a sociopath; they are, but they’re also the words of America’s likely next president.

But aside from simply delighting in the death and destruction she can rain down upon weaker nations, Hillary is also the standard-bearer for finance capital and Wall Street.  Her connections to Goldman Sachs and nearly every major bank make her statements about reining in Wall Street both laughable and deeply infuriating; there’s only so much cynicism a country can take.  So, wealthy benefactors like George Soros, the Pritzker family, Haim Saban, and many others fall over themselves to line up behind the First Woman PresidentTM just as they did behind The First Black PresidentTM.

And this point must not be understated.  Identity politics is one of the principal levers by which the Democratic Party keeps liberal America in line.  Never mind that The First Black PresidentTM expanded AFRICOM, killed the single most important African leader, continued the oppression and exploitation of millions of Africans all over the continent, presided over the rapid expansion of drone assassinations, and so much worse; forget all that, I mean, he’s black.  Similarly, Hillary is able to translate her gender into political currency, one that allows the Democratic Party to continue the charade that it is a party for everyone.

And of course, who could forget economic policy?  Clinton represents the best of what Wall Street has to offer.  She is a devout neoliberal, the high priestess of the Church of Free Trade.  She and her husband presided over the passage of NAFTA which has devastated millions of Mexican families while gutting the American industrial base, all the while making superprofits for Big Agribusiness, Big Retail, and big banks.

In effect, Clinton is quite similar to Obama in that both have an insatiable appetite for war and the economic orthodoxy of neoliberalism.  As such, both are the quintessential Democrats: political snake-charmers whose smiles and warm embraces hide the coldness of their hearts, whose devotion to the multicultural rainbow belies their deep hatred of the working class and poor.

And of course, it is imperialism abroad and neoliberalism at home that makes an establishment leader.  It is a reckless disregard for the rights of ordinary Americans, as well as those around the world, that makes one “Presidential.”  It is a deep sociopathy that truly demonstrates that a politician is ready for the office.  So, given that, it would seem that America is indeed #ReadyForHillary.