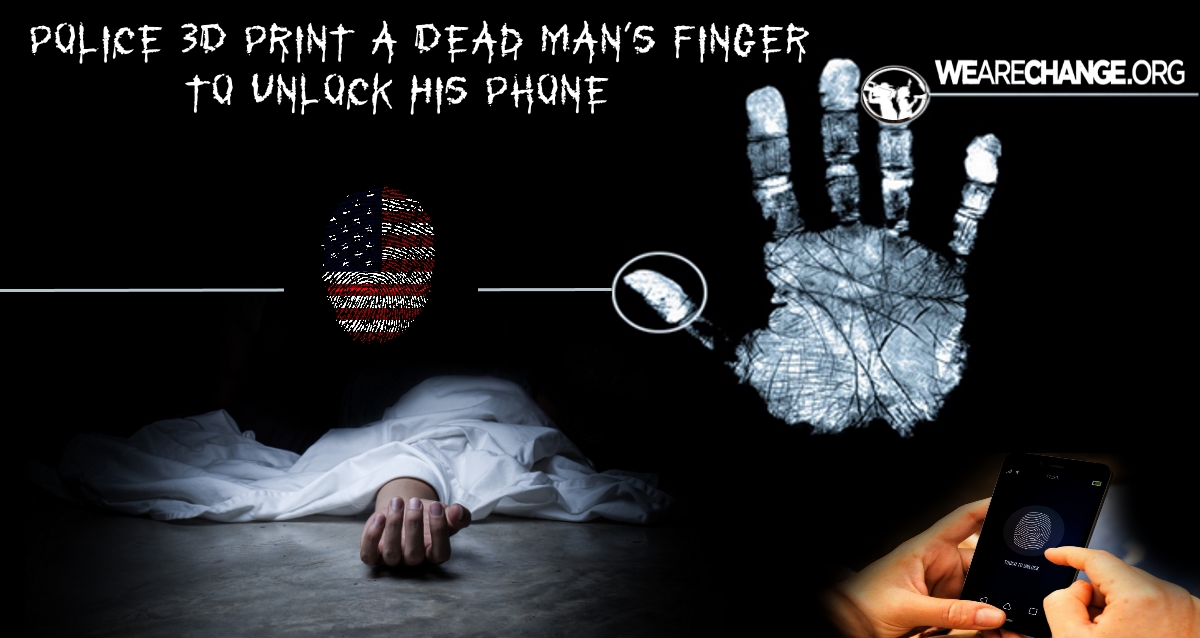 Thursday, July 21, 2016 Swati Khandelwal
Now no more fighting with Apple or any smartphone maker for back door access, as federal authorities have now discovered a new method for unlocking phones, simply by printing a 3D copy of a suspects fingerprint.

Yes, Police in Michigan are considering 3D printing a dead man’s fingers so they could unlock smartphones in investigation crimes using their biometric sensors.

A new report published today from Flash Forward creator Rose Eveleth revealed that the police recently approached professors at the University of Michigan to reproduce a dead man’s fingerprint from a prerecorded scan.

Once reproduced, the 3D print would be used to create a false fingerprint of the dead man, which could then be used to unlock his smartphone using its biometric sensors.

The man was a murder victim, and law enforcement investigators believed that his phone might contain some useful information relevant to the case.

Why Police Can’t 3D-Print Themselves? Because…

Since smartphone biometric sensors used to detect someone’s fingerprints today rely on electrical currents that most 3D-printed objects can not conduct, such technique would not normally work and help investigators get into the victim’s phone.

This, in turn, made the police approach professor Anil Jain, who told Fusion that he “coated the 3D printed fingers in a thin layer of metallic particles” so that they could conduct electricity and “the fingerprint scanner can read them,” helping the police catch the murderer.

But that will not always be the case. From MSU Today:

“Lucky for us, this phone did not require a passcode after a fixed number of failed attempts with fingerprints,” Jain said. “This allowed us to try different digitally enhanced fingerprints.”

Jain then asked Detective Rathbun to bring the phone back to his lab for another attempt to unlock it. This time, it worked.

“All of us just looked at each other,” Jain said. “And then we all shouted ‘it worked’ and started giving each other high fives.”

Jain told NPR that he “hopes this achievement will show the limits of fingerprint locks on mobile phones.”

This technique for breaking into phones, plus the fact that a “thought” like your pass-code has more legal protections than a fingerprint, means that, when it comes to the authorities, a numerical pass-code offers stronger protection of your phone’s contents than a fingerprint. Either way, though, police are supposed to get a warrant before snooping through your phone… unless you’re dead, in which case you no longer have a right to privacy.

When thinking about its implications and consequences in future, this technique could make everyone vulnerable who uses biometric security to protect the privacy of their smartphones.

Since fingerprints are the unique and all time the constant identity of a person, there is a risk of having someone steal a fingerprint using a high-resolution photo and recreating it that way.

Since the investigation is ongoing, much details about the technique are not available.

The best solution, for now, is to disable any biometric sensor enabled on your smartphone, just in case you don’t want the police or anyone else to 3D print a replica of your fingers and unlock it with ease. Rather set a secure password to lock your device.

Remember: You can change your passwords if it is stolen, but you cannot change your fingerprints.