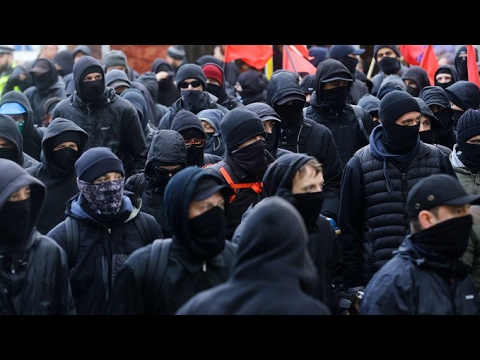 Luke Rudkowski was live on the ground at UC Berkeley, California for the Free Speech Rally where things quickly heated up between pro-Trump protesters and Antifa.

The rally started off quite quietly with only approximately 20 police and flimsy, orange, plastic fencing that would not be strong enough to keep both sides apart. 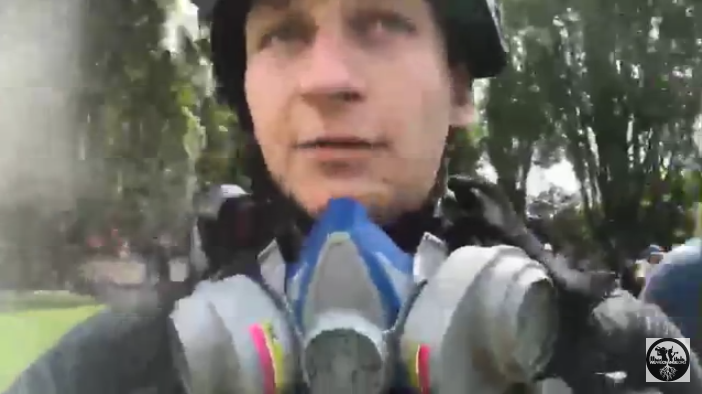 One man sarcastically offered a Pepsi, no doubt in reference to the recent, controversial commercial by Pepsi featuring Kendall Jenner. A loud shout of “You’re a fascist!” can be heard.

Luke walked around, speaking to people with Lauren Southern and encouraged her to wear protective gear. Lauren Southern made her speech and thanked the left for all their good work!

Rudkowski had to put a gas mask on when pepper spray was sprayed into the crowd. Luke repeatedly mentioned that the police were doing absolutely noting to keep the two sides apart.

There was a white ‘Empathy Tent’ where people could go to talk to someone. As the slogan says, “Come Talk To Us – We Listen!”

After a while Luke thanked everyone for watching his live stream on YouTube and he moved the coverage over to a live broadcast on the We Are Change Facebook page. 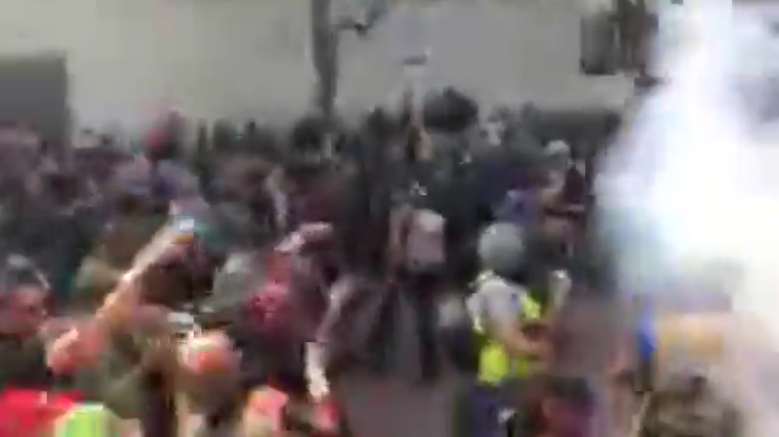 Lauren Southern, seen here in protective gear, was not deterred by the volatile scene as she filmed the event side by side with Luke. 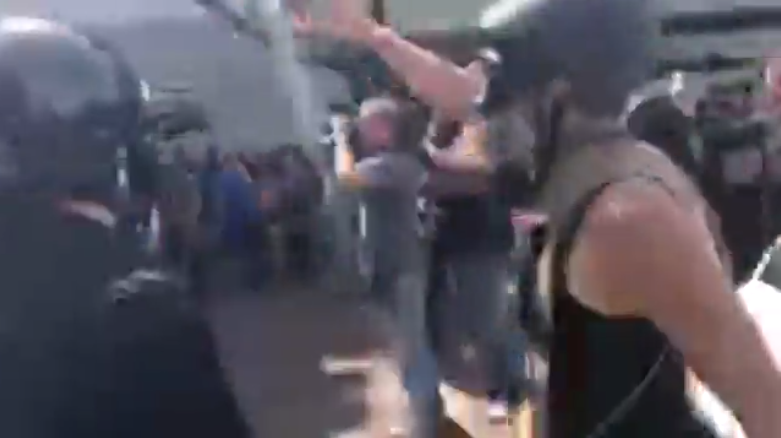 Poole reported that a group had seized a dumpster and were pushing it down an ally. 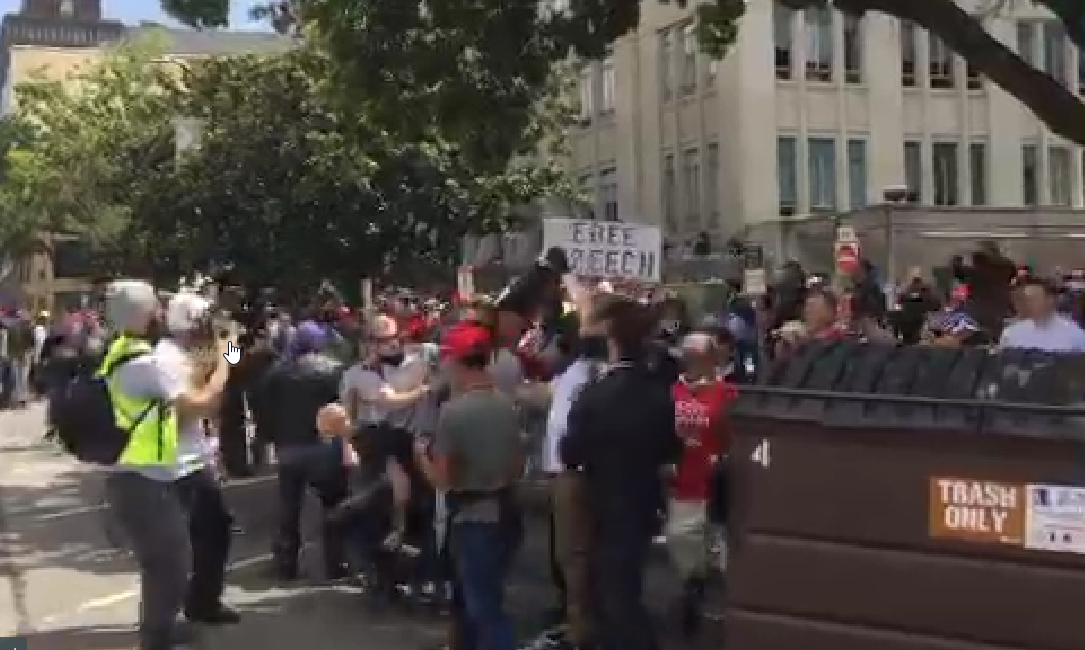 .@Timcast Tim Pool is like 'They're pushing a dumpster down the street right now. They got the dumpster right now.'#BerkeleyProtest

Loud bangs could be heard going off, and Poole became quite concerned, saying he’d never experienced anything like this before.

12:39PM – Luke can be heard saying, “We are live right now, Berkeley, at the free speech rally, there has been a lot of people hurt, police have totally stood down, a massive riot has virtually just unfolded, a lot of people have been seriously hurt…a lot of rocks being thrown. The situation has definitely escalated.” Shouts of, “Get the commies off the streets! Get the commies off the streets!”, can be heard. A massive bang goes off. Luke says, “Eardrums are done”. Shouts of, “Commies go home! Commies go home!”, can be heard.

Antifa has fireworks and explosives. Glass can be heard smashing. Luke says, “Bricks are being thrown”.

A man can be seen holding up the flag of Kekistan. Learn the real meaning of the flag here. 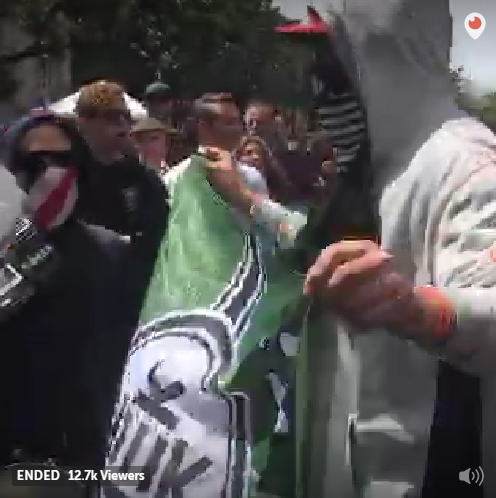 A woman sustained a head injury and was covered in blood.

Literally blood on the streets and the police ran away from the #BerkeleyProtest live now on twitter pic.twitter.com/XRbh8hhMB5

An Antifa member is seen being punched, hard, directly in the face by a Trump supporter. 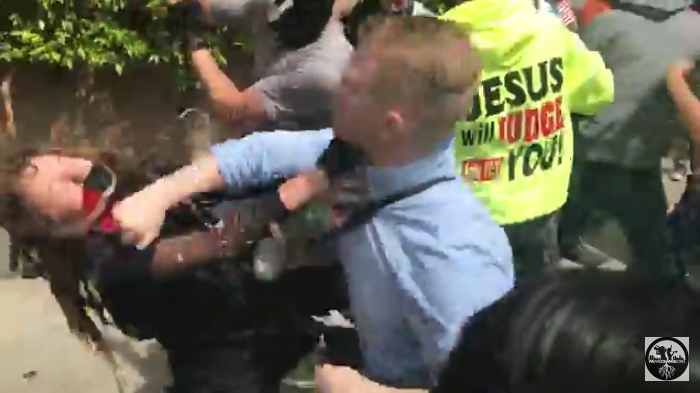 2: 53 PM – A fight breaks out, and a member of Antifa can be seen spraying people with pepper spray.

Just some of the craziness from Berkeley today, uploading more on https://t.co/eddYL0TemC right now as we speak TODAY WAS NUTS pic.twitter.com/5MnJ7Zd12w

2:56 PM – Here is the man offering a Pepsi from earlier in the day. Luke reports that he too has sustained an injury now.

This guy was trying to give antifa a Pepsi in Berkeley, later he had a huge wound on his head and was bleeding everywhere pic.twitter.com/6mAd4en4PK

Police were filmed standing around acting oblivious as the two groups collided over and over with some people getting seriously injured clearly failing to do their jobs and enforce the rule of law.

If you liked today’s broadcast, please consider donating to us we have a whole team of writers behind this operation not just Luke, but we won’t be able to continue to bring you broadcast like this if things keep up. Youtube and Google Adsense are both severely hindering our ability to keep this operation going. You can donate here on the website or on our patreon. Thank you and remember We Are Change.