Living on the street, a pastor connects with Sacramento’s homeless, raises money and learns about himself 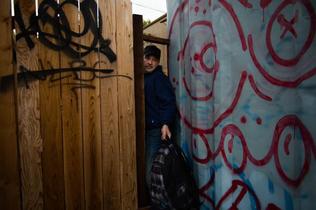 On his fourth day of impersonating a homeless man, the Rev. Rick Cole was starting to look the part.

Beneath a black baseball cap, his face was pale and unshaven. His eyes were bloodshot and weary, framed by deep creases. Cole, pastor of the giant Capital Christian Center on Micron Avenue, stood inside Cesar Chavez Plaza in downtown Sacramento on Wednesday morning wearing jeans and a blue hoodie, and contemplating where he might clean up and brush his teeth.

He had last showered on Sunday, in a communal facility at the Union Gospel Mission. He had not eaten since Tuesday, when he had chicken noodle soup and a sandwich with hundreds of others at the Loaves & Fishes homeless services complex on North C Street. It was farmers market day at Cesar Chavez, and the aroma of kettle corn and jumbo hot dogs were starting to make Cole hungry.

Cole, 57, was on a mission to find out what it is really like to be homeless in Sacramento, and in the process raise consciousness and money for a program that offers shelter to street peopleduring cold and wet winter nights.

By Day 4, after spending one sleepless night at the mission and two more in an alley, the popular pastor had gained a wealth of insight and loads of empathy for people who bed down in parks, on sidewalks, on church steps and in other outdoor places. “Homelessness strips you down,” said Cole. “It’s dehumanizing. I think this experience will help me grow in my compassion for people and see the world in a different way.”

The good news, for Cole, is that soon he will be reunited with his Fair Oaks home, his aging silver Lexus, his soft bed and his fancy suit jackets. The pastor, who has a flock of more than 4,000 congregants at his megachurch off of Highway 50, plans to live outside for at least another week, or until his “Rev on the Street” campaign raises $100,000 to fund a program that provides winter shelter for homeless people at houses of worship throughout the area.

Cole’s effort is part of a drive to raise $300,000 for Winter Sanctuary, which buses about 100 homeless people on winter nights to area churches and synagogues, where they eat and sleep and get help finding work and permanent housing. The county used to fund the annual shelter program, but no longer does so. The nonprofit Sacramento Steps Forward group now coordinates the effort, with Cole and his church as a leading force.

Even though the pastor’s goal is to walk in the shoes of homeless people, he has had some distinct advantages over others on the street. He has had a friend with him at all times. One is a martial arts specialist. One is a former police officer. One is the lead singer of the rock band Papa Roach.

On Wednesday evening, Cole’s family, including his wife, Cathy, dropped by the park to visit with him.

Though he is carrying no credit cards and left his home with just $60 in his pocket, the pastor has an iPhone that he charges wherever he can find a working electrical outlet. He has friends in high places, including Mayor Kevin Johnson, with whom he had a random encounter on Wednesday. Cole has occasionally reached for vestiges of his real life, such as his favorite Grande Skinny Vanilla Latte at Starbucks. His O’Neill backpack looks new.

But his encounters with homeless people have been genuine, he said.

Cole has approached the down-and-out and gently queried them about “what brought them to this place,” he said. Some have refused to speak to him. Some are too mentally ill or addicted to provide him with coherent responses. But others have told their stories, and offered him tips about places to eat, sleep and wash. One even mentioned Winter Sanctuary.

He never volunteers that he is a pastor, or that he has a loving wife and children, a suburban home, a good income and reliable transportation, he said. He said he is not trying to indoctrinate anyone.

“I’m not leading with a religious approach,” Cole said, as he waited to enter the Main Library to kill some time and work on his journal. “I’m not a street preacher. I’m just trying to be caring and loving toward people. Of course, if I can help them get on a new path, that’s great. That’s love.”

Cole has for the past few years been a voice for homeless people, serving on boards and commissions that are working toward establishing more affordable housing. But seeing the issue up close has given him an entirely new perspective. Though he has encountered little hostility as he walked the streets of Sacramento, he said, he has noticed that many people refuse to make eye contact with him or offer him a nod or hello. Others, though, have offered a bag of nectarines, a bottle of water and even a $5 bill. Within 10 minutes of carrying a cardboard sign on the corner of I and 10th streets that read “NEED HELP” and “God Bless,” he had $25 in his hand. He donated it to the cause.

“I just wanted to have the experience of what that is like,” he said. “I want to have as many types of experiences as possible.”

He planned to camp along the American River later in the week.

On Sunday, when Cole disclosed, from the pulpit, his plan to live homeless, a few in his congregation called him “crazy,” he said. But most cheered him on.

“I wasn’t surprised,” said church member Miguel Castillo. “Not given the character of Pastor Rick.

“Of course, I was concerned a little bit,” Castillo said. “I have never found myself praying for him so much. But I know what he is doing will touch lives and make a difference.”

The weather has been beautifully cooperative for the first week of Cole’s journey. The days have been sunny and mostly busy, as the pastor makes his way across the city on foot and via light rail. He has rested his feet in coffee shops, read at the library, undergone a TB test that was required for admittance to shelters, and spent time in Friendship Park at the Loaves campus.

The nights are much longer.

Cole has been warned that drugs and violence are a part of street life. Every time a noise jolts him from sleep, “my heart races a little bit,” he said. He wakes up with the sun, if not before.

“I don’t really feel nervous about my surroundings during the day,” Cole added. “But at night, the darkness brings some fear.”

In advance of Cole’s adventure, some of his congregants scouted out an alley, about 15 blocks from Cesar Chavez, that they thought would be a relatively safe place to sleep. The spot is adjacent to an industrial building, hemmed in with a graffiti-marred wooden fence and equipped with a motion sensor light.

Before bedding down there for the first time, Cole and his companions removed a couple of loose slats, then squeezed in and cleaned up used condoms, food remnants and dirty bedding that were inside. They barricaded the opening with an empty garbage bin, and fashioned an “alarm” bell out of cans and string, which they attached to a ladder just inside the entrance.

The space was serviceable for a couple of days.

But on Wednesday evening, a clear night with a half moon hanging in the sky, Cole, his camp mate for the night and three members of his congregation noticed that something was amiss. The barricades and alarm were gone. Cole’s orange and gray dome tent was balled up outside.

Tom Platina, a former police officer who works for Capital Christian Center’s winter shelter program, slipped inside and found a slightly built, disheveled and barefooted woman curled up on wooden pallets and covered with blankets.

“Come out! We don’t want to hurt you!” he shouted. “Do you have any weapons? I’m serious. I have children!”

“I feel bad for that lady,” he said, as church members trained a video camera on his face. “I feel bad about displacing this person.” But he was also wary of sharing the space with her. “We don’t know who might be joining her later,” he said.

Standing face to face in the darkness, he and Platina came up with a plan. Rather than simply turn her out onto the streets, Platina would pay for a room for her at a nearby motel.

“Meet me there,” he told the woman, as she emerged from the hovel covered with a blanket. After she stumbled down the alley and into the street, Cole set about pitching his tent with the help of Papa Roach lead singer Jacoby Shaddix, a reformed addict and Capital Christian member.

A few minutes later, Platina walked to the motel to arrange for a room for a woman who embodied the face of homelessness that Cole so badly wanted to understand.

But she never showed up. She had vanished into the night.

REV ON THE STREET