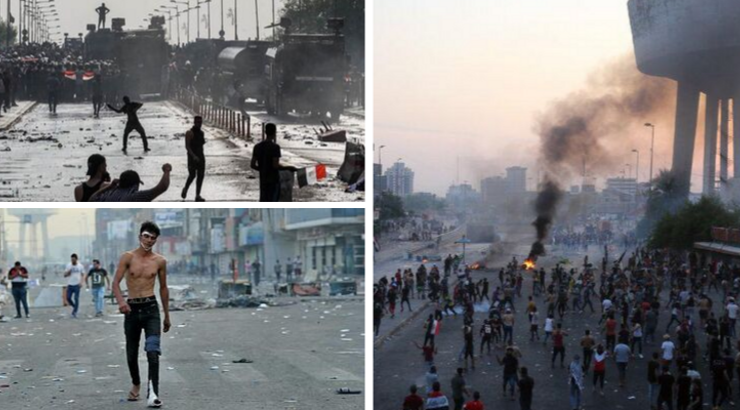 Now in their third day, mass anti-government protests across Iraq have resulted in 30 dead and over 1000 wounded, amid a brutal police crackdown which has involved unprepared security forces firing live rounds on demonstrators.

Several major cities are now under curfew and the government has cut internet access for much of the country. In a signal of just how dire and growing the mayhem is, Iran has now sealed key border crossings with Iraq just ahead of an annual Shia pilgrimage this month, where crucial Iran-Iraq border crossings swell with pilgrims.

Iraqi television confirmed the Khosravi border crossing was closed, with more potentially to follow, per Reuters:

Iranian Interior Minister Abdolreza Rahmani Fazli said last week 3 million Iranian pilgrims were expected to visit Kerbala for the religious ritual of Arbaeen, which marks the end of a 40-day mourning period for the grandson of the Prophet Mohammad.

Baghdad is now under round-the-clock curfew as of Thursday, after unrest started Tuesday, reportedly driven chiefly by youth and fueled by popular anger over corruption, unemployment, and the lack of basic services.

Thousands of protesters clashed with riot police in Iraq’s capital and across the south on Thursday, the third day of mass rallies that have left 30 dead.

“I’ve got nothing but 250 lira (20 US cents) in my pocket while government officials have millions,” he told AFP.

Indeed though Baghdad officials including President Barham Salih have essentially admitted police regretfully early on used a “heavy-handed response” in a situation which unexpectedly spiraled “out of control.”

Meanwhile, there is some evidence to suggest insurgents in some parts of the country used the opportunity to fire back on police.

Late in the day Wednesday Reuters reported armed elements were active among the demonstrators in the south of the country, in what marked a major escalation:

Curfews were imposed earlier in three southern cities while elite counter-terrorism troops opened fire on protesters trying to storm Baghdad airport and deployed to the southern city of Nassiriya after gunfights broke out between protesters and security forces, police sources said.

According to figures from Iraq’s Human Rights Commission, over 1,000 have been injured and over 60 arrested, also as communications are more difficult, given about 75% of the country is without internet access, per cybersecurity monitor NetBlocks.

Iraq declares curfew in Baghdad after nationwide anti-government protests escalate into one of the worst security challenges in years. More here: https://t.co/fwotLhrVzf pic.twitter.com/6TPYqnOibi

“The curfew does seem to be working,” Al Jazeera’s Imran Khan said from Iraq’s capital city. “The protesters have been trying to gather in different areas of Baghdad throughout the day, but every time they reach crowds of 50 to 60 people, the security forces disperse them. The government hasn’t indicated when the curfew will be lifted.”

We are essential witnessing a de facto martial law situation unfolding, with no end in sight.