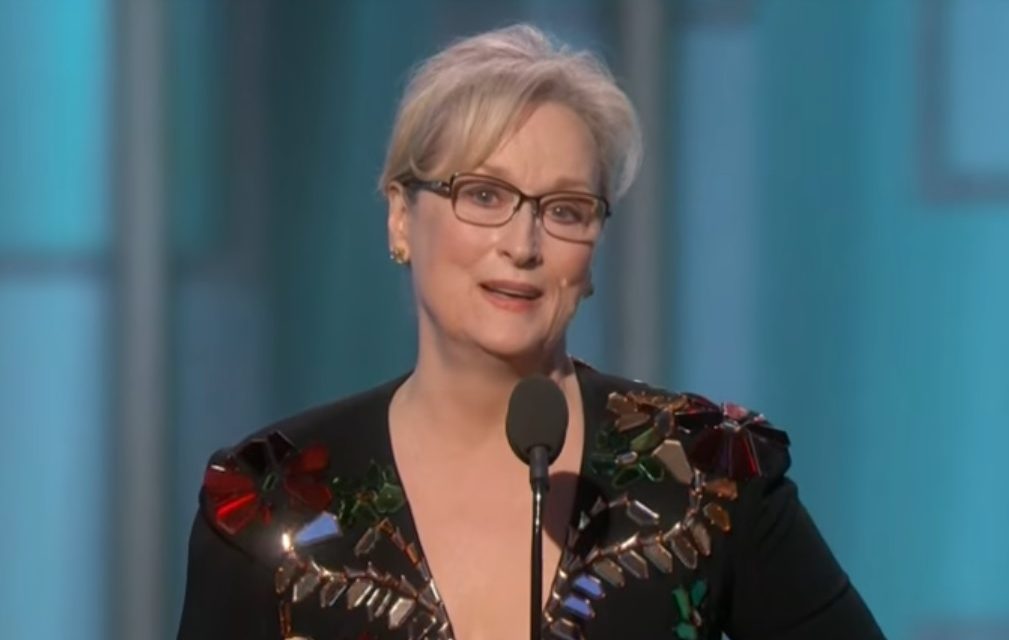 World-famous Hollywood actress Meryl Streep recently made an earth-shattering discovery — one she shared with the rest of the world during her speech at the Golden Globes award ceremony Sunday evening: the government is capable of doing terrible things.

Since Streep delivered her anti-Trump speech, she has received heaping praise from the media and the internet at large. She is being lauded for speaking out against injustice and Trump’s intolerable, exclusionary ideology.

Like much of Hollywood and the left-wing branch of the corporate media, Meryl Streep has embraced a newfound sense of righteousness and political activism in the era of President Donald Trump.

As she informed viewers on Sunday after condemning Trump’s infamous decision to mock a disabled reporter:

“Disrespect invites disrespect. Violence incites violence. When the powerful use their position to bully others, we all lose.”

She is painfully correct and is right to be concerned about Trump’s impending reign. But missing from her opinion Sunday evening (and over the last eight years) was her indignation at outgoing President Obama’s own disrespect, violence, and bullying.

Though the media establishment has been content to downplay the Nobel peace prize-winning president’s innumerable acts of violence — including the deaths of hundreds of children via U.S. drone strikes, the arming of radical terror groups in Syria for the purposes of geopolitical posturing, and his support for Saudi Arabia’s bloody, human rights-violating assault on Yemen — speaking out against violence and disrespect has once again become trendy in the face of Donald Trump.

But one of Meryl Streep’s most urgent points focused on, as she noted, “when the powerful use their position to bully others.” Immediately after expressing this, she went on to insist the press is vital to holding these bullies accountable:

“We need the principled press to hold power to account, to call them on the carpet for every outrage.That’s why our founders enshrined the press and its freedoms in our constitution. So I only ask the famously well-heeled Hollywood Foreign Press and all of us in our community to join me in supporting the committee to protect journalists. Because we’re going to need them going forward. And they’ll need us to safeguard the truth.”

Again, Streep is correct. But her previous support for President Obama — and her presence at his farewell party over the weekend — unfortunately renders her sentiment hypocritical. During his time in office, President Obama perpetuated some of the most severe “bullying” the press has seen in U.S. history — unfortunate details the Hollywood establishment is evidently yet to learn of or acknowledge. These acts were indisputably unconstitutional but failed to draw rebuke from celebrities and the corporate media (according to Streep, apparently, such rebuke was not necessary until Trump rose to power).

Obama even directly intervened in another country’s affairs to ensure a Yemeni journalist, who reported on U.S. bombs that killed civilians, was kept in prison even after he was cleared for release.

Further, the very same president who campaigned on transparency and protection for whistleblowers set a record for the number of people charged with a century-old law passed to silence dissent against World War I: the Espionage Act. This law has been used against Chelsea Manning, who exposed Bush-era war crimes, Edward Snowden, who revealed Obama’s mass surveillance programs, and other whistleblowers who were promised protection for revealing government crimes during the Obama administration.

Most recently, President Obama signed the latest NDAA, which includes not only the familiar indefinite detention clause, but also a new law to establish a government-sanctioned ministry of truth in the face of alleged “fake news.” Though mainstream outlets like the Washington Post have repeatedly published false and misleading stories, the president is now cracking down on independent media under the guise of fostering accurate reporting — reporting the administration has attempted to stifle by targeting whistleblowers and journalists. Obama signed this new law knowing full well President Trump will preside over its enforcement.

But it still gets worse. Though Meryl Streep stood on her gilded bully pulpit lecturing the world about holding Trump accountable and preaching about freedom of the press and tolerance, her chosen candidate for 2016 spent years violating the very same values Streep claims to uphold. Streep spoke in favor of Democratic nominee Hillary Clinton at the Democratic National Convention over the summer, apparently unaware of the former secretary of state’s own role in stifling the free press and perpetuating violence, disrespect, and bullying.

Through Wikileaks’ release of DNC emails, none of which the DNC or the Clinton campaign have disputed, it became abundantly clear that Clinton and the Democrats colluded with the media to craft a pro-Clinton narrative regarding the election. Further, when she was in office and held tangible power, her State Department planted questions with CBS’ 60 Minutes ahead of the show’s interview with Wikileaks founder Julian Assange. The questions were carefully framed to cast doubt and paint Assange as a traitor.

Would a politician concerned with justice and accountability directly attempt to secretly puppeteer the media in order to discredit a figure forcing transparency on those in power? Would a celebrity genuinely committed to the free flow of information support a candidate with a proven track record of stifling truth?

(This is to say nothing of Clinton’s support for regimes that violently oppress women and gays or her severely hawkish plan to institute a no-fly zone in Syria, to name just a few of Clinton’s shows of disrespect and violence.)

Though Meryl Streep has drawn enthusiastic praise for her takedown of the president-elect, it appears her outrage stems from a two-party-tinted worldview rooted not in principle, but in empowering equally repugnant politicians who happen to share her ideology. Because Democrats wrap their violence and power mongering in inclusive rhetoric, she and millions of other Americans do not consider them a threat.

Should the press monitor Trump stringently? Of course. Does he pose a danger? He actually poses many. Did Barack Obama and Hillary Clinton conduct themselves in the very same way Streep fears Trump will?

As Meryl Streep realizes how dangerous the executive branch of the U.S. government can be, the precedents Obama established are proving powerful weapons for the incoming president she vows to challenge.

This article (Meryl Streep Finally Realized the Government Does Terrible Things) is free and open source. You have permission to republish this article under a Creative Commons license with attribution to Carey Wedler and theAntiMedia.org. Anti-Media Radio airs weeknights at 11 pm Eastern/8 pm Pacific. If you spot a typo, please email the error and name of the article to edits@theantimedia.org.