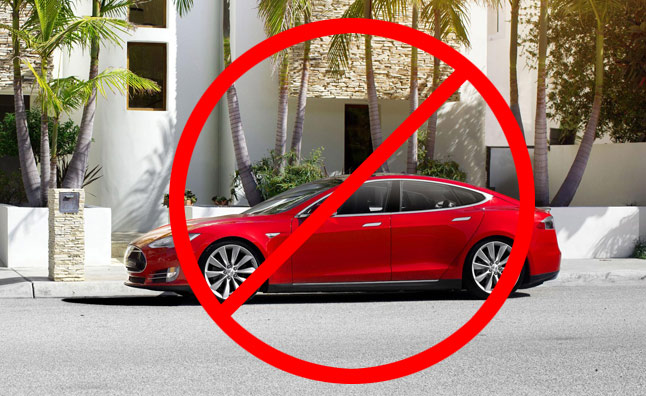 Snyder said direct sales of new vehicles is already banned in the state. This law will explicitly require all automakers to sell through a network of franchised dealers.

Snyder, who has boasted of making Michigan more hospitable for entrepreneurs, brings Michigan into a growing number of states that have raised obstacles to the California-based electric car company.

That law didn’t specifically mention Tesla, which started in 2003 and operates from a headquarters in Palo Alto, Calif., and from a former General Motors-Toyota plant in nearby Fremont.

People look at a Tesla Motors vehicle on the showroom floor at a Florida mall. Both houses of the Michigan legislature passed a bill that would require all automakers, including Tesla, to sell through franchised dealers. (Photo: Getty Images )

Todd Maron, Tesla’s general counsel, said the Michigan bill goes beyond requiring sales through a franchised dealer to prohibit the use of a gallery to simply display cars and communicate in person with consumers.

“People don’t introduce bills unless they intend to change the law,” Maron said recently. “Secondly, people don’t sneak language in at the last minute unless they know it will be consequential.”

Asked what Tesla’s next step will be, Diarmuid O’Connell, vice president of business development, said it was unclear if the company would file a lawsuit.

“We do take at their word the representations from the governor that he supports a robust debate in the upcoming session,” O’Connell said. “We’ve entered an era where you can buy products and services with much greater value than a car by going online.”

Michiganders can still go online or call Tesla and purchase the Model S.

Dealers have tolerated and learned to cooperate with online car shopping services such as Edmunds.com and TrueCar.com. But a manufacturer who bypasses the traditional franchise system to sell directly, either in physical stores or online, is a threat, even a low-volume automaker like Tesla.

Customers check out a new Tesla all electric car, Monday, March 17, 2014, at a Tesla showroom inside the Kenwood Towne Centre in Cincinnati.(Photo: Associated Press)

Tesla has been selling through stores or galleries mostly in upscale shopping malls along the east and west coasts and in Pennsylvania, Ohio, Indiana and Illinois. The company’s website shows a network of 60 locations in 23 states, but some of those can’t sell directly. The company takes orders online. That approach undermines how franchisees have sold vehicles for decades, and they are fighting to stop Elon Musk, Tesla’s cofounder and CEO, from establishing his own retail model.

Musk wants to sell cars directly and has been fighting this legislative battle on a state-by-state basis. Specific language varies from one state to another, but more than half the 50 states have similar franchise laws to Michigan that prohibit manufacturers from competing with their franchised dealers.

Texas and Arizona have so far prevented Tesla from selling inside their borders, Tesla has won court cases and opened stores in Massachusetts, Minnesota and New York. It only has galleries in Texas, Arizona, New Jersey and Maryland.

Last month, the Supreme Judicial Court of Massachusetts ruled that Tesla can keep selling from a shopping mall in the Boston suburb of Natick.

“This is an embarrassment for the State of Michigan and democracy,” said Daniel Crane, a law professor at the University of Michigan. ” When no one was looking, the car dealers slipped language into the bill that would strengthen their case against Tesla. They went to the Governor’s office and told his staff they needed this change in order to avoid the result in Massachusetts, where the Supreme Court ruled against them and in favor of Tesla.”

“Does the law change anything or not? If it doesn’t, why did the car dealers want the changes?” Crane said.

While Tesla does not have a store in Michigan, it would like to open at least a gallery soon, said O’Connell. There are 100 Tesla Model S vehicles registered to Michigan residents who either bought them online or drove to a store in Illinois, Indiana or Ohio.

Next year the company plans to introduce the Model X, a more versatile and affordable alternative to its pricey Model S, which starts at about $75,000 and can run well above $100,000.