Media Implicates Saudis in Plotting of 9/11, Distracts From U.S. and Israel Involvement 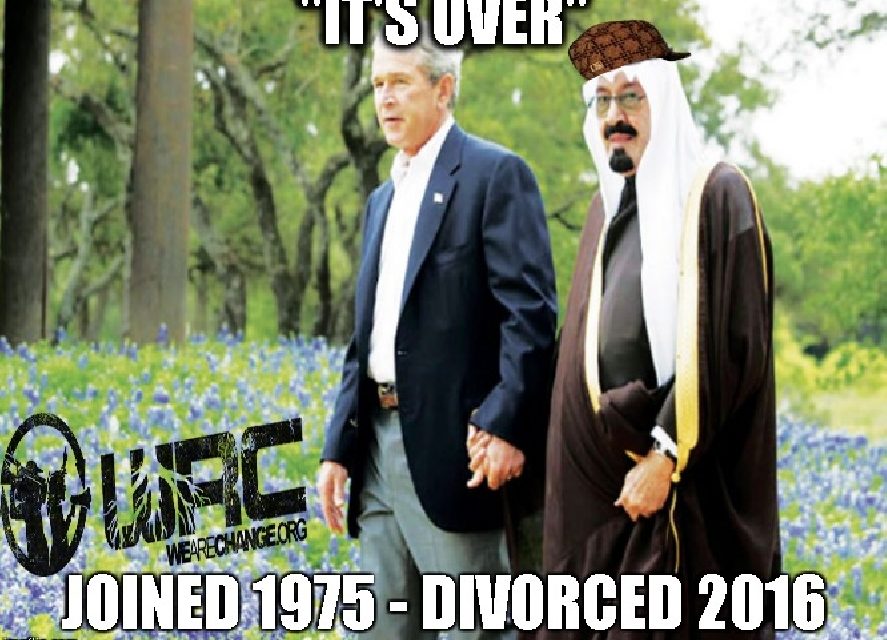 This article is published with permission, and linked attribution to Brandon Martinez of  Non-Aligned Media

Recently the mainstream media has been plastered with headlines exposing how Saudi Arabia was instrumental in implementing the attacks on 9/11, and how it had been “classified” originally only because of Saudi backmail. The recent wave of stories points to the House of Saud as the true architects of 9/11, not Osama Bin Laden and the CIA backed Taliban jihadist fighters hiding in the mountains of Afghanistan.

Allegedly, the reason the government covered the Saudi involvement originally was because of “financial pressure” from the Gulf state.  The New York Times ran a story claiming that the Saudis threatened to sell $750 billion in U.S. treasury bills if the congress passed the 9/11 bill. The New York Post published a story headlined “How U.S. covered up Saudi’s role in 9/11” which lays out the supposed smoking gun evidence that members of the Saudi regime and royal family bankrolled some of the alleged 9/11 hijackers, 15 of whom were Saudi they now constantly remind us.

At the time of the 9/11 attacks, Saudi prince Al-Waleed Bin Talal bin Abdulaziz al Saud  owned 7-9% of News corporation, and was the second-largest voting shareholder in 21st Century Fox. Immediately after the September 11 attacks, Al-Waleed gave a check for $10 million dollars to New York City Mayor Rudy Giuliani. In August 2011, Al-Waleed announced that his company had contracted Bin Laden Group to build the tallest building in the world.

This barrage of stories may be designed to shift public scrutiny of 9/11 away from the Neo-conservative/Zionists that controlled the U.S. government during 9/11, and onto the Saudi Arabian government. Not only do these stories infer that the Saudi regime sponsored the 9/11 attacks, but they also implant the idea that the Saudis were responsible for the U.S. government’s cover-up of what happened. The result is a picture painted in the public’s mind of a dominating Saudi Arabia overpowering a helpless and innocent U.S., while obscuring the evidence of U.S. and Israeli involvement. 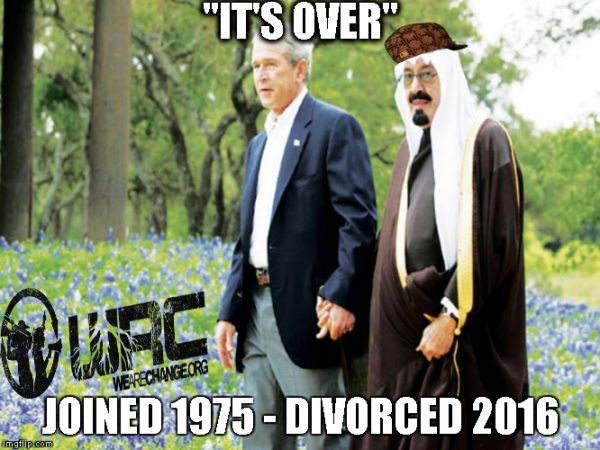 Then President George W. Bush and then Crown Prince of Saudi Arabia, Abdullah bin Abdulaziz al Saud walk amid the blue bonnets of Crawford, TX in 2005

This narrative benefits the same neo-conservative/Zionist interests who have dominated U.S. foreign policy since the events of September 11th. AIPAC sponsors and their American politician puppets have had ample time and motive to both lobby for 9/11 Truth and justice, or to cover up their involvement.
Two of the most hard line AIPAC-aligned US Senators, Chuck Schumer and Ted Cruz, are both backing the bill currently before congress which would open the Saudis up to scrutiny. Even Nancy Pelosi wants the 28 pages on 9/11 declassified.

So, why are these establishment AIPAC-puppet politicians coming out now, demanding that these 28 pages be released, 13 years after they were classified?

This disinformation frenzy likely has one main purpose: to mislead the public about who actually planned, carried out and benefited from 9/11. As Brandon Martinez documented in his book Grand Deceptions, the nation which benefited most from 9/11 was Israel. Benajmin Netanyahu said the attacks were good for Israel, and 9/11 has been wielded by the US and Israel as a “one size fits all excuse to invade” and conquer Arab and Muslim countries that the Israeli-American imperialists want to control.

The Saudi government was sued by thousands of 9/11 victim’s family members due to the suspicion that Saudi Arabia helped to finance Al Qaeda. The Saudis hired the law firm of Bush Administration insider James Baker to defend them in that lawsuit. The 9/11 families’ lawsuit against Saudi royals was thrown out on a technicality related to the ability to sue a foreign government and, later, the Obama Administration backed the Saudis during the appeal. 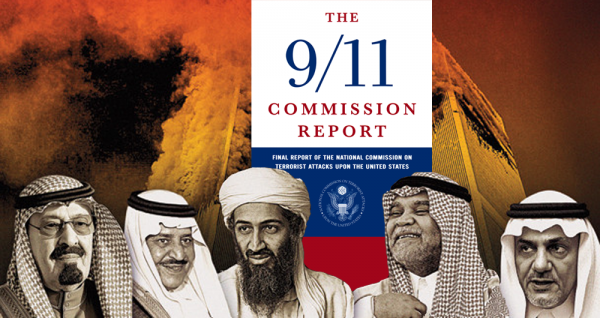 The ‘Saudis did it’ angle depends on the claim that 19 hijackers commandeered and crashed four planes into the Twin Towers, Pentagon and a field in Shanksville  —  regardless of the fact that many of these “hijackers” turned up alive and well in the Middle East protesting their innocence. As Brandon Martinez writes,

“It is highly doubtful that those claimed to have been behind the controls of the 9/11 planes could have performed this incredible feat when they were known to be terrible pilots with limited experience on commercial planes. What of the miraculous unvarnished passport discovered near the World Trade Center adorning the name and picture of Saudi national Satam al-Suqami? Was this laughable impossibility the handiwork of the Saudi government conspirators in an inexplicable attempt to frame themselves? Somebody planted it there, and it obviously was not any agent of Saudi Arabia.”

The Saudi rulers – as corrupt, autocratic and reprehensible as they are – are little more than middle-mangers of the U.S. and Israeli war machine that has invaded country after country in the middle east following 9/11.  Middle-managers cannot organize the biggest conspiracy of the 21st century, hoodwinking the world’s foremost superpower and somehow managing to get away with it.

The Saudi men were ‘patsies’

“We know that the 15 hijackers who were Saudis, the alleged hijackers, because they were not on those planes – not one of the 19 hijackers, or any Arabs, were on any of the four planes, according to the Flight records passenger list, and according to all of the evidence that would be there if they were on the planes, but has not been produced,” said Dr.  Kevin Barrett “And all 15 of these guys had that visa.”

“That shows that they were in fact Central Intelligence Agency agents. Some of them were living with FBI people in California. So these 15 Saudis were not working against the United States government, they were working for the United States government, and they were set up so that Saudi Arabia could be potentially blamed for the September 11 attacks, which were actually perpetrated by Israel and its American assets. If there were no actual Arab hijackers on 9/11 and the whole thing is a frame up and farce, then the Saudis can’t be considered responsible for financing a terrorist operation that was conducted by others. Whether they were cognizant of it or not, the Saudis financed nothing more than a group of patsies who were selected as fall guys for a highly sophisticated false flag operation organized at the highest levels of US and Israeli intelligence. If there was any blackmail or unseen coercion involved, the Saudis were on the receiving end of it, not the other way around. The empire doesn’t take orders from low-level sheiks in Arabia, only high-level US officials could have organized the stand-down at the Pentagon, the Saudis could not have possibly managed to disable US air defenses and NORAD, nor could they have organized the terror drills that simultaneously mimicked the attacks. Since the formation of OPEC and founding of the petrol-dollar, the US and the Royal Saudi family have been working together with the Globalist Zionist banking elites to help push the secular world government. Since the Oil money is drying up, OPEC is Going Broke, and the IMF Say’s Saudi Arabia Could Be Bankrupt By 2020, it would appear that the west is willing to sacrifice the weakest link of the 9/11 conspiracy to public opinion, effectively setting up the fall guy to let the true perpetrators get off scot–free.” Brandon Martinez

The fact is; whatever is in those 28 pages, it should be considered nothing more than a red herring artifice to steal our attention away from the real captains of terror in Washington DC, and Tel Aviv, Israel. 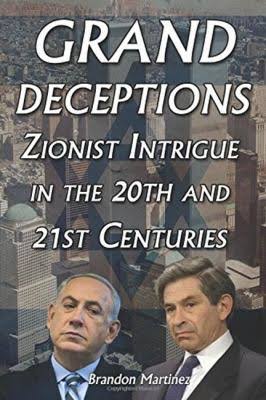 Grand Deceptions: Zionist Intrigue in the 20th and 21st Centuries.

A short, concise study of Israeli involvement in the 9/11 attacks, Zionist influence over US foreign policy (particularly the central role of pro-Israel neoconservatives in dragging the US into the war in Iraq), the fraud of the post-9/11 “war on terror,” and other Zionist political intrigues in the 20th and 21st centuries. This book explores the role of Zionists in helping foment World Wars I and II as a means of establishing a Jewish state in Palestine, the extensive collusion between Nazis and Zionists, the hidden history of bloody Bolshevism, and the fabrications and distortions of official World War II historiography, designed to advance the victors’ post-war agenda of re-shaping Europe and the Middle East.

In this video Luke Rudkowski breaks down the real truth behind the push by the establishment to release the 28 pages. We go over recent geopolitical moves around the petrodollar and how there is a bigger play here. The U.S seems to be threatening Saudi Arabia with old information that everyone was aware of and people need to ask why this is happening now. Support our work by investing in us on https://wearechange.org/donate/ and make sure do the job of the main stream media better then they ever can.