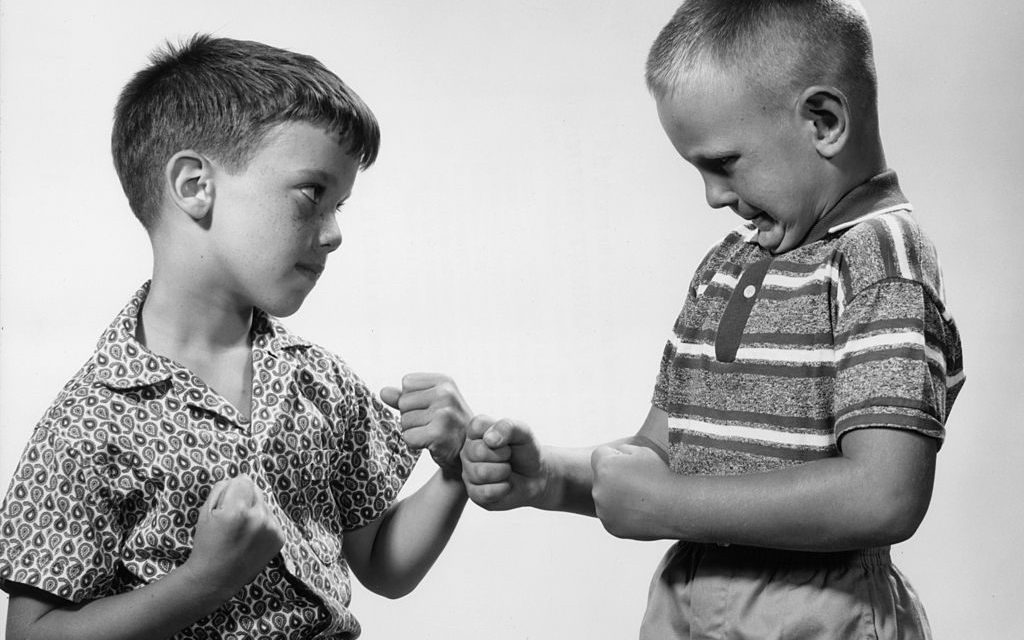 On January 1, 2017, the state of Missouri will implement a public school policy sure to accelerate the descent into police state dystopia.

The Hazelwood School District put out a memo to parents and guardians stating that, according to Missouri statute, fights at school or on buses will be treated as felonies — which can result in up to four years of prison, fines or probation.

We want to make you aware of a few new State Statutes that will go into effect on January 1, 2017, which may have a drastic impact on how incidents are handled in area school districts.

The way the new statue reads, if a person commits the offense of an assault in the third degree this will now be classified as a Class E Felony, rather than a misdemeanor. If he or she knowingly causes physical injury to another person (hits someone or has a fight with another individual and an injury occurs) – one or both participants may be charged with a Felony.”

Gone are the days when teachers broke up fights and sent the kids home, calling the parents and perhaps suspending the kid if it was a serious incident. “School Resource Officers” or local cops now arrest the kids and, if there is any perceived injury (an arbitrary judgment), will charge them with third-degree assault – treating children cooped up in school as if they are violent adults on the streets.

“What does this mean for students?

For example, if two students are fighting and one child is injured, the student who caused the injury may be charged with a felony. Student(s) who are caught fighting in school, bus or on school grounds may now be charged with a felony (no matter the age or grade level), if this assault is witnessed by one of the School Resource Officers/police officers (SRO) or if the SRO/local law enforcement officials have to intervene.”

It doesn’t stop there. Even attempts or threats to cause harm will be treated as a Class A misdemeanor, which can bring up to a year of prison time. If the assaulted person is considered a “special victim,” a Class D felony can be imposed which can mean up to seven years in prison.

The Free Thought Project has reported on numerous examples of how public schools are increasingly relying on armed cops to carry out discipline, thereby criminalizing the age-old reality of children behaving badly.

This has resulted in the increasingly prevalent phenomenon known as the “school to prison pipeline.”

The Arizona State Law Journal found that over the last three decades, there has been a marked shift in public schools to using law enforcement instead of school administrators and teachers for students violating school rules.

Approximately 260,000 students were referred to law enforcement during the 2011-2012 school year, and about 92,000 students were arrested on school property. Unsurprisingly, these numbers affect disadvantaged minority students the most.

The Center for Public Integrity (CPI) documented disturbing examples of children being subjected to law enforcement, just as a shocking video emerged of a cop brutalizing a teenage girl in the classroom for misbehaving.

”Some police actions involve alarming physical altercations, with kids subdued and handcuffed. Others may be handled without much force. But law-enforcement involvement in school discipline has routinely resulted in kids—some as young as elementary school-age—summoned to court to answer charges that they committed crimes. Frequently, charges include battery or assault in connection with schoolyard fights or disorderly conduct or disturbing the peace at school —issues that some believe should be handled by school officials, not cops.”

The worst state is Virginia, with a rate of 16 students per 1,000 being referred to law enforcement. One school had a shocking 228 students, most between 11 and 14, that were referred to cops. A 12-year-old girl was charged with obstruction of justice for clenching her fist at a cop. 11-year-old Kayleb Moon-Robinson, who is autistic, was slammed to the floor for walking out of class too early, and then was charged with felony assault on a police officer and disorderly conduct.

Other shocking examples include five- and six-year-olds being handcuffed, arrested and booked into jail for throwing temper tantrums. Dress code violations, tardiness, and even passing gas have all led to students being referred to law enforcement.

CPI describes how early exposure to law enforcement and the “justice system” has a devastating impact on the mental health of children, and makes it more likely they will grow up to live all or part of their lives behind bars.

The Arizona State Law Journal confirmed that incarceration increases delinquency and future involvement in the justice system, and “the official processing of a juvenile law violation may be the least effective means of rehabilitating juvenile offenders.”

“No one should underestimate the negative consequences associated with incarcerating a juvenile, both to our society as a whole and to the youth themselves, which is the end result of the school-to-prison pipeline. Empirical research demonstrates that incarceration produces long-term detrimental effects on youth, including reinforcement of violent attitudes and behaviors; more limited educational, employment, military, and housing opportunities; an increased likelihood of not graduating from high school; mental health concerns; and increased future involvement in the criminal justice system.”

By enacting their draconian new rules, the state of Missouri is completely ignoring science, instead, falling back on uniformed state agents with badges and guns – trained to confront the worst of society – to deal with misbehaving kids in school.

Missouri is ignoring the proven benefits of “restorative justice.”

“Thus, rather than excluding the student from the school community for misbehaving, which potentially can cause resentment, disrupt that student’s educational progress, and lead to recidivism and dropping out of school, one of the primary goals of restorative justice is to integrate the offender back into the school community as a productive member.

In essence, restorative justice practices are conflict resolution tools that involve victims, offenders, and other members of the school community. Using formal and informal conferences, or “circle groups,” victims share with offenders how they have been harmed by the offender’s behavior, offenders have opportunities to apologize to the victims, and, with the help of the victims and the other members of the school community, conference participants devise remedies for the harmful behavior.”

Instead of smart approaches like restorative justice, Missouri is set to plunge its children into a police state nightmare — guaranteeing a long-term rise in prison population and further destroying the mental health of the most vulnerable individuals.
Read more at http://thefreethoughtproject.com/school-fights-felony-prison-pipeline/#IBoq4mMYHvDBFzrB.99