Modern Prohibition Takes It On The Chin With Uruguays Marijuana Legalization 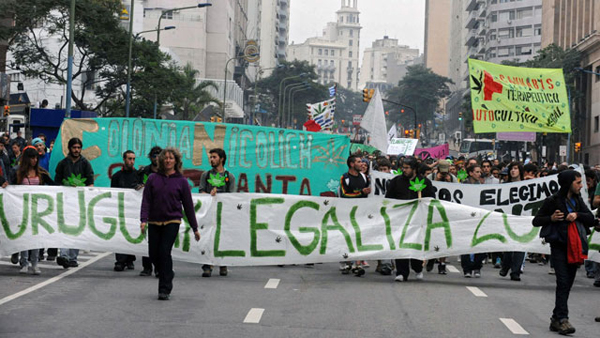 We’re not just talking about “decriminalizing” it, or allowing recreational use while still prosecuting pot’s cultivation and selling. The government will still limit amounts to six plants per home per year. And as with alcohol purchases in the US, selling pot in Uruguay will require a license.

In typical government meddling fashion, allowing personal use but not production and sale made a mockery of sense. Speaking of mockeries of sense, the usual arguments about marijuana being a “gateway” drug were out in force among the drug warriors. Colorado Senator Alfredo Solari, whose state is set to alllow its first legal weed sales in just a few days, said, “Competing with drug traffickers by offering marijuana at a lower price will just increase the market for a drug that has negative effects on public health.”

Apparently it is much, much better for “public health” for prohibition to breed cartel and gang violence, which is the inevitable result when politicians use their armed enforcers to prevent people from engaging in the procurement and consumption of something they really, really enjoy.

You know how most of the world laughs at alcohol prohibition now? Well, in the future they’ll laugh at us for not being able to see that prohibition of other substances was just as silly and destructive. Prohibition doesn’t actually stop anyone who wants drugs from getting drugs. It just makes th e drugs a lot more expensive while adding a thick layer of violence and danger in the resulting black market.

It also gives government opportunity to fill its cages with non-violent drug consumers and low-level retailers, all of whom have their chances for employment permanently ruined as a result. That, however, is a mild insult added to the injury of incarceration resulting in their brutalization and possible rape.

So when people like Senator Solari talk about negative effects on public health, we can’t help but think that the same number people getting high without the cartels, gangs and government kidnappings represent an incalculable improvement in public health. Hell, it would be great if a few more people got high if it meant an end to police home raids, corner pushers and cartel mass murders. Busybodies and the fully propagandized will blanch, but a little pot next to the whiskey in the liquor cabinet will mean society becomes richer, happier and more peaceful. That’s what happens when you get diminish ugly bits of political violence like prohibition.

The drug that has a negative effect on public health is violence itself, a substance to which politicians and their world of enablers are severely addicted. They love using violence to get people to do what they want. Violence, however, begets more of the same. Prohibition is the clearest, most demoralizing example of this. Recreational drug use is a personal choice, a matter of aesthetics, but it’s exactly the kind of thing busybodies make a moral and collective issue that presumes ownership of other people. It’s exactly the kind of thing governments can’t help but get in on.

Like we’ve said before, the state is a self-licking ice cream cone; it creates its own demand. By manufacturing a crime, states create the need for their brand of monopolized, violent policy enforcement. But marijuana prohibition is now so nakedly absurd that it seems that the state is going to have to relent.

It’s still annoying to hear that there will be monitoring of purchases and other regulation, like where one can buy it and how much one can grow per unit of time. For our part we will not be celebrating till all the armed thugs who claim the right to monitor and control people go away. But we can hope that Uruguay’s legalization is another small sign that faith in the state and its proscriptions is flagging.

It’s also important to note that this is happening in Uruguay. This is just another example of why we at TDV, along with many of our clients, are so enthusiastic about South America. TDV Passports offers a very popular passport program from neighboring Paraguay, and in keeping with our PT (Prior Taxpayer/Permanent Traveler) recommendations, clients who opt for the Paraguay citizenship and passport spend much of their time in Uruguay.

While the USSA is continues on the road of more imperialism, more fascistic regulation, more inflation and more debt, things are heading in the opposite direction in Latin America. That’s why Latin America, particularly the nation-state of Chile, was chose as the place to found Galt’s Gulch. Imagine yourself with a Paraguayan passport, a home in Galt’s Gulch Chile, and able to get some quality time in Uruguay where they are leading the way in a vital area of freedom.