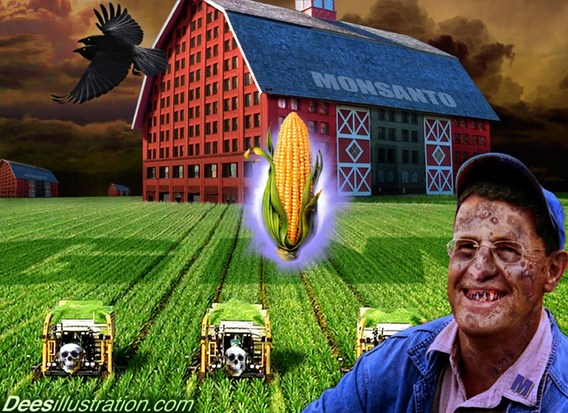 Illustration by David Dees at ddees.com

Roundup is the Monsanto herbicide that is touted as the cornerstone of GMO food crops. Monsanto claims these crops are genetically engineered to withstand heavy spraying of Roundup.

Therefore, the crops live and the weeds die. Breakthrough.

There are several key lies associated with these claims—but a new one has surfaced.

A study to be published this month indicts Roundup and, in fact, the general class of insecticides and herbicides. On what grounds? When they’re tested for safety, only the so-called “active ingredients” are examined.

The untested ingredients are called “adjuvants,” and they are said to be inert and irrelevant. But the new study concludes this is far from true. The adjuvants are actually there to INCREASE the killing power of the active ingredient in the herbicide or insecticide.

Safety tests don’t take this into account. “Active ingredients” are already toxic, but the adjuvants ramp up their poisonous nature even higher.

And the worst offender is Roundup.

Here are key quotes from a January 31 article at GM Watch, “Pesticide approvals misleading—and Roundup most toxic of 9 pesticides tested.”

“Pesticide formulations as sold and used are up to 1000 times more toxic than the isolated substance that is tested and evaluated for safety.”

“Roundup the most toxic of herbicides and insecticides tested.”

“…the complete pesticide formulations as sold and used also contain additives (adjuvants), which increase the pest- or weedkilling activity of the pesticide. These complete formulations do not have to be tested in medium- and long-term tests – even though they are the substances to which farmers and citizens are exposed.”

“This is a serious defect of the regulatory process, according to a newly published study by the team of Professor Séralini (Mesnage et al. 2014, Biomedical Research International). The study found that for eight major pesticides (out of a total of nine analyzed), the commercial formulation is up to 1000 times more toxic than the active ingredient assessed for safety by regulators.”

“The study was carried out in vitro on three types of human cells.”

“The study produced another surprise outcome. Roundup is often claimed to be a benign herbicide that is widely used in public spaces and by home gardeners as well as by farmers. Yet the researchers found it was by far the most toxic of all the herbicides and insecticides they tested.”

Obviously, we are looking at a major crime and major scam here. It boils down to this: the manufacturers who put these adjuvants in their pesticides and herbicides know very well why they are there—to increase the killing power of the “active ingredient.” But this fact is overlooked and ignored. The pretense is, the adjuvants are inert and harmless.

The new study that exposes this crime is led by French scientist Gilles Eric Seralini. He previously published a study showing rats developed tumors when fed GMO food. A firestorm of criticism was leveled against him. He was “discredited.” But in case you think we should reject Seralini’s latest findings, here is my piece on the earlier manufactured firestorm:

Remember a researcher named Gilles-Eric Seralini, his 2012 GMO study, and the controversy that swirled around it?

He fed rats GMOs, in the form of Monsanto’s Roundup Ready corn, and they developed tumors. Some died. The study was published in the journal, Food and Chemical Toxicology. Pictures of the rats were published.

A wave of biotech-industry criticism ensued. Pressure built. “Experts” said the study was grossly unscientific, its methods were unprofessional, and Seralini was biased against GMOs from the get-go. Monsanto didn’t like Seralini at all.

The journal which published the Seralini study caved in and retracted it.

He used rats which (supposedly) had an inherent tendency to develop tumors (the Sprague-Dawley strain), and because he used too few rats (10). That’s it. Those were Seralini’s errors.

Well, guess what? Eight years prior to Seralini, Monsanto also did a rat-tumor-GMO study and published it in the very same journal. Monsanto’s study showed there were no tumor problems in the rats. But here’s the explosive kicker. Monsanto used the same strain of rats that Seralini did and same number of rats (10). And nobody complained about it.

Michael Hansen, senior scientist at Consumer’s Union, explains in an interview with Steve Curwood at loe.org:

“Well, basically what Dr. Séralini did was he did the same feeding study that Monsanto did and published in the same journal eight years prior, and in that study, they [Monsanto] used the same number of rats, and the same strain of rats, and came to a conclusion there was no [tumor] problem. So all of a sudden, eight years later, when somebody [Seralini] does that same experiment, only runs it for two years rather than just 90 days, and their data suggests there are problems, [then] all of a sudden the number of rats is too small? Well, if it’s too small to show that there’s a [tumor] problem, wouldn’t it be too small to show there’s no problem? They already said there should be a larger study, and it turns out the European Commission is spending 3 million Euros to actually do that Séralini study again, run it for two years, use 50 or more rats and look at the carcinogenicity. So they’re actually going to do the full-blown cancer study, which suggests that Séralini’s work was important, because you wouldn’t follow it up with a 3 million Euro study if it was a completely worthless study.”

Yes, the mists are clearing and things are coming into focus.

Any comments, Monsanto? I’d be happy to pass them along to Michael Hansen.