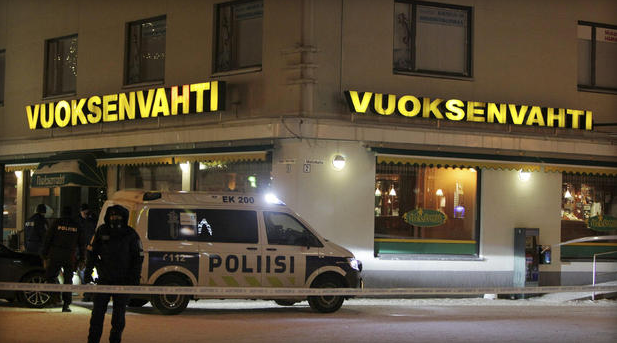 A gunman opened fire in southeastern Finland killing a local town councilor and two journalists, all women. Police have called the shooting “random” with no known motive one male suspect has been detained for questioning.

A mayor Tiina Wilen-Jappinen,  and two local reporters none of which have been named were brutally murdered outside of a restaurant Vuoksenvaht in town shot by a sniper sitting out in his car in what authorities are calling a random shooting. So is that it case closed we have two journalist dead and a politician and the motive of a paid professional hit?

According to investigators the suspect arrived outside the Vuoksenvaht restaurant in his car and shot the three women as they stepped out of the restaurant. He then waited in the car until police arrived, and without fighting back silently left in the custody of police.

Shortly before a police patrol car arrived to the scene around midnight Saturday, police spokeswoman Heli Jamsen-Turkki said. “Two of the victims were in their early 50s and one was in her 30s.”

Police detained a 23-year-old unknown local Finnish man who didn’t resist arrest. The three victims were shot multiple times in the head and torso with a sniper rifle. There was no known motive.

Imatra, which has 28,000 inhabitants, is about 140 miles east of the capital, Helsinki.

“We decided to open a crisis center after the shooting occurred right in the middle of the town near restaurants and nightclubs,” said Saara Raudasoja, a spokeswoman for the South Karelia Social and Health Care District. “There were people there when it happened. In such a small place, it’s quite a huge incident and many people were shocked.”

Lead investigator Saku Tielinen, who is leading the investigation, said “the suspect had a criminal record” including – violent incidents and theft, but declined to further elaborate or identify him. “There is no indication of a political motive. It seems the gunman and victims didn’t know each other,” said Tielinen. “All indications are that he chose his victims randomly.”

Two deaths of journalist is an immediate red flag for me in the words of late murdered journalist Christopher Story “reporters who expose the criminal activities of our political elite risk their lives.”

That angle can not be ruled out and should be highly investigated with two members of the press dead and one politician especially since the gunmen used a sniper rifle and didn’t fire shots at police and quietly went away to prison.

“The “suicide” deaths of Hunter Thompson, Gary Webb and J.H. Hatfield show that reporters who expose the criminal activities of our political elite risk their lives.They are on the front line of freedom. When they are killed, it means very bad things are in store for us.”
~Christopher Story