Mystery of the cancer cluster killing Chinese workers at factory that makes new iPhone 6: 13 struck by leukaemia in SAME plant… were cleaning agents to blame? 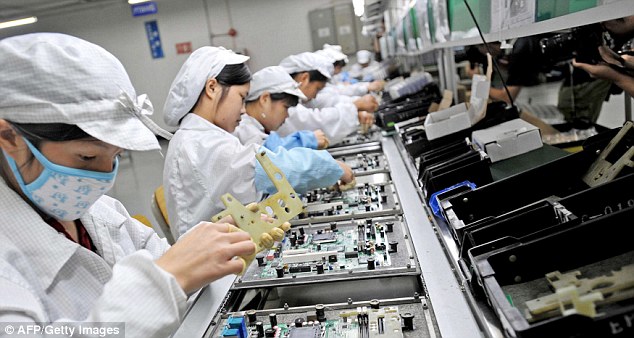 By SIMON PARRY IN SHENZEN, CHINA Published by www.dailymail.co.uk

Apple is investigating its supply chain after the discovery of a disturbing cluster of leukaemia deaths among young workers at a factory in China where millions of its iPhones are made, The Mail on Sunday has learnt.

At least 13 workers in their late teens and early 20s have been diagnosed with leukaemia after falling sick at the massive factory in Shenzhen since 2010. Five have died – and at ages when doctors say cases of the blood cancer are rare.

Families and a labour welfare group believe the leukaemia was caused by exposure to chemicals used to clean electrical panels and say many more workers could have been affected. They add that young workers who fall sick with leukaemia are dismissed and denied continuing medical coverage, bankrupting families as they desperately pay for treatment. CONCERNS: Workers at the Foxconn factory in Shenzhen, where iPhones are made

Apple – whose launch celebrations for the iPhone 6 last week included a performance by Irish rock band U2 – says it is taking the allegations ‘very seriously’ and is looking into the issue at the Shenzhen factory, where about two million iPhones a week are made by an army of 230,000 migrant workers from across China.

The factory is used for manufacturing by other electronics giants but has been the main production base for Apple’s iPhones since the first model in 2007.

Details of the leukaemia cluster emerged after Apple last month announced it was banning the use of two potentially toxic chemicals, benzene and n-hexane, in the final assembly of iPhones and iPads.

Foxconn, owner of the Shenzhen factory, is sending officials to meet the Hong Kong-based labour welfare group to find out more about the leukaemia cases, the labour group said.

However, the Taiwan-based company, which also makes products for other electronics giants, insisted there was no evidence to link the leukaemia cases to the victims’ work and said it had not used benzene and n-hexane ‘for many years’.

It also claimed the rate of leukaemia at its plants across China was ‘significantly lower than the reported annual rate’. Leukaemia affects about three people in 100,000 globally, but the majority of its victims are children and elderly people.

All 13 identified victims were aged between 19 and 24 when their cancer was diagnosed and were working on or near production lines mostly for iPhones and Apple products at the Longhua and Ganglan plants at Foxconn in Shenzhen, Labour Action China said.

Families of the victims said workers regularly used chemicals with only disposable plastic gloves and face masks for protection, were given little or no information about the potential dangers, and were not told which substances they were handling.

After falling sick at work and being diagnosed with leukaemia, the families of two workers said they were dismissed and paid off by Foxconn within three months, denying them medical cover to pay for hospital treatment.

The leukaemia cluster emerged when families visiting sick relatives in the cancer ward of the Number Two People’s Hospital in Shenzhen noticed how many other Foxconn workers were being treated. Charity, CureLeukaemia, explains what Leukaemia is Cheng Fuying, whose son Yi Long is now in the advanced stages of leukaemia, said seven to eight workers a year from the same factory were diagnosed and admitted.

Speaking at her son’s hospital bedside, Ms Cheng said: ‘For the first month, he was cleaning all the machines with chemicals. He never knew what chemicals he was handling because they were given to him by the distributor up the line. He said he was just given a bucket of liquid to clean the machines.

‘After that, he changed jobs every month or two within the factory but he was on a production line when he fell ill. He started non-stop bleeding from his gums so co-workers helped him go to hospital.’

He was diagnosed with leukaemia.

‘I was shocked,’ said Ms Cheng, who has given up work to care for her son, sleeping on a mattress on the floor of his ward. ‘I had never even heard of that disease in my home town. I thought, “How could this happen?”’

A doctor treating Yi Long told Ms Cheng that chemicals at Foxconn might be to blame. ‘He told me Foxconn has a high incidence of this disease,’ she said, adding that the doctor had rounded angrily on Foxconn managers when they visited.

‘The doctor told them, “You know why this is happening. Even your boss [Foxconn’s billionaire founder] Terry Gou’s brother died of leukaemia. You have so many patients in our hospital already. Do you really need to ask how he is?”’

Yi Long began a course of chemotherapy. Factory bosses told him he would have his wages paid to April and would then be dismissed.

Fellow workers collected about £6,000 towards Yi Long’s medical bills, while Foxconn paid him £3,000 for his termination, equivalent to a year’s wages with overtime.

By August 2012, Yi Long’s family could no longer afford his medical bills. ‘We asked for help from the factory but they said, “It’s not our fault, it’s your disease,” ’ Ms Cheng said. By then, she had discovered there were many other workers from Foxconn being treated for leukaemia at the same hospital.

‘There were seven or eight people from Foxconn who got leukaemia that year alone,’ she said.

A group of them protested outside the factory gates, demanding to see management, but were threatened with arrest unless they left. When their money ran out, Yi Long’s mother took him home to Hubei where they tried treating him with Chinese traditional medicine. He returned to Shenzhen in August last year as his condition worsened.

‘The doctors say he needs a bone-marrow transplant and they have found a donor but we have no money for the transplant,’ his mother said. The identity card belonged to Feng Honggan, who died of leukaemia last year aged just 20. He had been working at Foxconn’s Shenzhen plant for four months when he began to suffer heavy nose bleeds Celebrating: Apple CEO Tim Cook with U2 at the iPhone 6 launch last week

Another worker, Feng Honggan, had been working at the factory for only four months when he was taken to hospital after suffering heavy nose bleeds in June 2011. He was diagnosed with leukaemia and died in November 2013, aged 20.

His parents Feng Huifeng and Qin Quixia, both 50, rented out their farm in Gansu, north-west China, and now work as street-cleaners in Shenzhen to try to pay off £80,000 of debt from paying for his treatment.

Honggan worked in the inventory of the factory, handing out materials and chemicals to workers. He wore disposable gloves and a face mask but was told by his bosses the chemicals were safe, his father said.

‘I talked to other patients and families in hospital and I found many of the patients had worked in Foxconn – a dozen or more,’ Mr Feng said.

A delegation of factory managers came to see Honggan in hospital. ‘First they came to see how he was doing. Then they brought him 21,000 renminbi [£2,100] and said, “This is a donation from the factory towards your illness.” They never came again and that was all he got.

‘Three months after he fell ill, they stopped paying him his wages, including his social insurance.’

Mr Feng went to the local government in Shenzhen to seek a ruling that his son’s death was the result of industrial disease, but he received a written reply saying Foxconn was a clean working environment that satisfied government requirements on chemical safety.

Suki Chung, executive director of Labour Action China, said she believed the 13 known cases in Shenzhen were ‘the tip of the iceberg’ and that many more Foxconn workers had succumbed to the disease.

In most cases, workers had returned to their home provinces where they were entitled to free medical help after being dismissed, despite the fact that many rural hospitals lack facilities to treat them. The factory, in Shenzhen, China, is used for manufacturing by other electronics giants but has been the main production base for Apple’s iPhones since the first model in 2007

In an email to Labour Action China about the leukaemia cases, Apple’s senior director for supplier responsibility, Jacky Haynes, said Apple took the concerns ‘very seriously’, adding: ‘We are working closely with Foxconn on this matter.’

Before announcing its ban on benzene and n-hexane last month, Apple said it had conducted a four-month investigation into 22 factories and said it found no evidence that the chemicals endangered the 500,000 people working there.

An Apple spokesman said in a statement it had discovered ‘a few cases’ in which suppliers were using benzene or n-hexane before it banned the two chemicals from its final assembly lines. However, the statement said use of the two chemicals ‘was in low concentrations and each use complied with our Regulated Substances Specification’.

‘We can also confirm that the employees who were diagnosed with leukaemia held different positions and job functions while working at our company across different product lines and customers, as the majority of our campuses in China serve multiple customers and manufacture a variety of products – there is no commonality, including links with any chemical agents, associated with the work they were doing.

‘Foxconn does not allow any entity within our company to use benzene or n-hexane, and has not procured or used these chemicals in any aspect of our operations for many years.’

Ms Cheng told The Mail on Sunday she had a message for Apple CEO Tim Cook.

‘If you have a conscience, Apple should at least make sure my son’s disease is treated. I don’t want compensation. I just want his medical bills to be covered so that his disease can be treated to give him a chance to live,’ she said.

‘I know that without a bone- marrow transplant my son will probably die. But we don’t have the money to pay for it.’