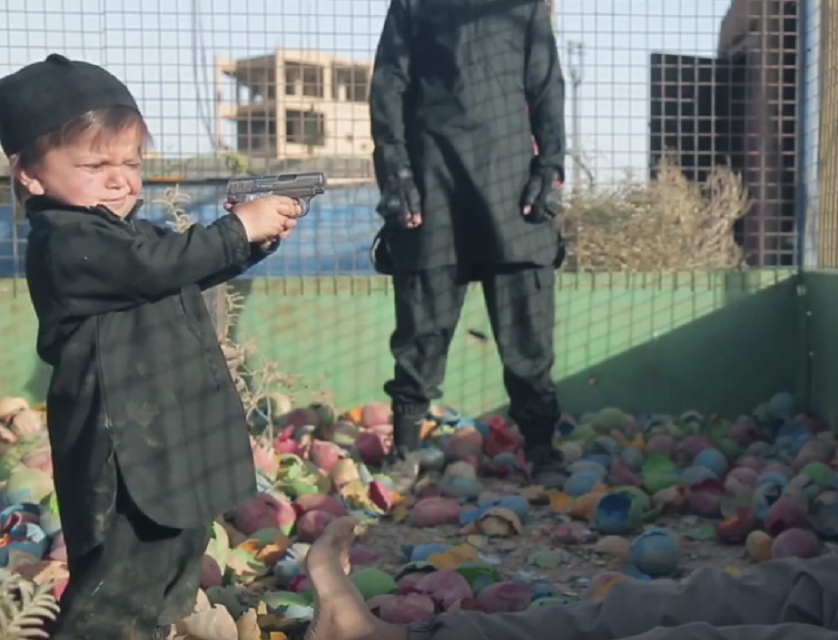 ISIS has released what may be their most chilling video yet, featuring children as young as preschool age murdering men who are bound to broken carnival rides.

In the 18-minute long nightmare video filmed in Syria, the first killing features an approximately 9-year-old boy participating in a public stoning. Somehow, that isn’t even close to the most sinister part of the film.

The film then cuts to three prisoners who have been accused of spying making video “confessions,” before showing an abandoned and broken down amusement park where they will soon be killed by the caliphate’s child “cubs,” as the organization calls their youngest recruits.

The first execution features a boy who appears to be approximately 7-years-old and wearing camouflage, sawing through the the throat of one of the men who is bound to a spinning ride. After the man is completely beheaded, the ride slowly spins with his head on the floor.

The next scene features the second prisoner tied to a nearly empty and decrepit ball pit, with a child in all black ISIS attire who appears to be approximately three or four years old. The tiny child, surrounded by the broken playthings, is then handed a small gun by an adult member of the group. The boy shakily shoots the prisoner five times before shouting “Allahu akbar” twice.

The final execution is carried out by a boy of roughly 10-12 years old, as the tiniest jihadist looks on. Just before the pre-teen beheads their victim, the younger boy makes a cutting motion across his throat.

The middle-school aged child then saws the man’s head off, before sticking the knife into his back.

At least one of the victims is believed to be from the Kurdish group PKK.

The violent and graphic film also features the children in their training, and waving the black ISIS flag.

Just before the start of the new year, the terrorist organization had also released a video featuring child jihadists as young as nine hunting down bound prisoners inside an abandoned building and executing them.